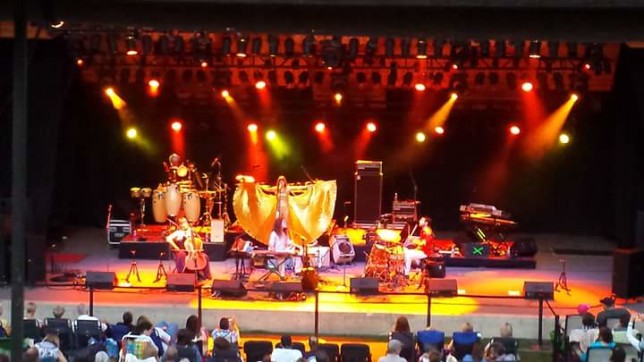 This is the second musing from the touring drummer, Ray Belli. Read his first musing here.

We all have friends in this world that we’ll never have the chance to meet, and the reason for this almost goes without saying: The world is large, and the scope of any individual life is small. These “would-be” friends are all the faceless, nameless strangers in the world with whom we’d share a laugh and have a beer if only fate had arranged for our paths to cross.

Being a touring musician turns faceless, nameless strangers into real people on a regular basis. As someone who has spent the better part of the last three years on the road, I can attest to this. Though the scope of my life is still so small because the world is still so large, every time I tour, whether it’s for three weeks or three months, that small scope widens just a bit.

I really connected with Charlotte. We spent most of the night together talking beside the fire pit.

As a result, I have countless friends scattered throughout the country, and most of them came into my life from out of the blue. Whenever I feel the impractical rigors of touring pushing me to the edge of sanity, I try to remember this: If I pursued the path of an ordinary nine-to-five job that bound me to one place, all of these people would be nothing more than names on a long list of hypothetical “would-be” friends, names on a list I’d never get to read. Instead, some of these “would-be” friends have become real-life friends, and I’m thankful to have met each and every one of them.

For me, the serendipity of these friendships (and the prospect of more to come) is the most gratifying aspect of touring. Sure, it’s great to play music in front of new audiences every night, but nothing is more surreal than when the stars align and conspire with fate to give faces and names to “would-be” friends disguised as fleeting strangers.

If I’ve made it sound like these “road friends” are the kind of people I talk to on a daily basis, then maybe my enthusiasm has been a little misleading. The reality is that these are the kind of friends who will not be at my funeral when I die and may even remain oblivious to significant events in my life. But that’s beside the point. Each of these friends represents an existential triumph, and here’s why.

I grew up in a cranky small town where many people are under the quasi-religious myth that you’ll only make two or three “real” friends in your entire life. According to this worldview, the tenets of “real” friendship are overzealous and caught up in extreme, unrealistic rhetoric such as “the willingness to take a bullet for so-and-so.”

While yes, there’s a special tier of friendship reserved for the people closest to you (duh), what this hometown myth failed to explain—or, more accurately, what the proponents of this myth failed to explain—is that there’s a whole wide world outside of the five square miles that spawned the myth itself. If I went out into the world as a touring musician under the impression I’d only ever make two or three “real” friends, the world would be just as faceless and nameless as it was on the day I was born. Instead, 24 years later, the world is full of faces and names, and yes, they all belong to my real friends.

I met Charlotte C. in Elk Bend, Idaho in the middle of an Arc Iris tour last September. Elk Bend is a largely undeveloped town in the middle of the mountains with a population of a couple hundred. You can drive through it for miles without encountering any semblance of human activity. There is, however, a single bar on the outskirt of town, and that’s where Charlotte and I met. As a member of a band who plays in mostly major cities, you may be wondering what I was doing in a place like Elk Bend. Without getting too bogged down by exposition, here’s the short of the story.

The singer of my band has an older friend named Joe who owns a piece of tranquil, isolated farmland in Elk Bend. He invited us to come over for his birthday, which happened to fall on one of our days off. On tour, days off are rare and planned far in advance, so the fact that we had one that logistically coincided with his birthday was a matter of perfect luck. Joe transformed the lone dive bar into a small, makeshift performance space where we gave him (what basically was) a private concert. The audience comprised five or six men in their sixties and two young girls who looked no older than twenty-three. Initially, I assumed one of the girls must have been the owner’s daughter. I couldn’t have been more wrong.

These girls, Hannah and Charlotte, were from England. Hannah was an exchange student who had studied here in the states, and Charlotte was here on a three-month tourist visa. I listened in amazement as Charlotte explained that she’d just left her prestigious job in broadcasting and was taking this time to explore the United States on a glorified road trip. They both had just stopped into this bar on a whim after unexpectedly hiking up a trail that led to an unmarked hot spring. They didn’t know where they were spending the night yet, so the band and I invited them back to Joe’s place. We all wound up staying up late, singing and drinking and feeling alive.

I really connected with Charlotte. We spent most of the night together talking beside the fire pit, and though I don’t remember exactly what we talked about, I remember looking into her eyes and feeling time speed up as if years and years’ worth of friendship were being condensed into the limited amount of time we had together.

For the rest of that tour, my encounter with Charlotte was one of the few things that kept me going.

There’s nothing more to this anecdote than my experience of that rare, powerful sentiment. The next morning we hiked the mountain and bathed together in the hot springs, and though these were bonding experiences in and of themselves, the real emotional gravity that came out of the whole thing was an extension of those initial hours spent talking at the fire pit. Maybe our shared feeling of being so far from home is what got the friendship moving so quickly. Maybe we just thought each other were cute. (I happen to think Charlotte looks quite lovely.)

Whatever the case, just because Charlotte probably will not be at my funeral when I die does not devalue the very spontaneous and strong sense of friendship we achieved in less than 24 hours together. In that short time I felt more deeply connected to her than I felt to plenty of friends from grade school whom I saw every day for five years straight.

Now, back to the proponents of the “You’re Lucky to Make Two or Three Real Friends in Your Whole Life” myth. If you yourself happen to be one of these people, you’re probably shaking your head and saying, “What an idealistic, romantic kid! That girl’s never been there when you needed her!”

But the truth is that you’d only be half right.

For the rest of that tour, my encounter with Charlotte was one of the few things that kept me going. Whenever I felt homesick, overworked, or devoid of any feelings at all, I would reflect on our time together and feel revitalized. We remained in contact via the Internet, keeping each other informed about the rest of our travels. I can’t speak for Charlotte, but during those two days in Elk Bend, I was able to feel the small scope of my life widening in real time.

Ray Belli is a New Jersey-born drummer who primarily performs with the experimental pop (???) band Arc Iris. He currently resides in Providence, Rhode Island, where he lives with two cats, two bandmates that resemble cats, and a girl with purple hair who is allergic to cats. He also performs and records as a freelance drummer throughout New England and the Tri-State Area.

He is available for hire as a Jim Morrison impersonator at your next party as long as the price is right and the catered food is vegetarian and onion free.

View all posts by Ray Belli →