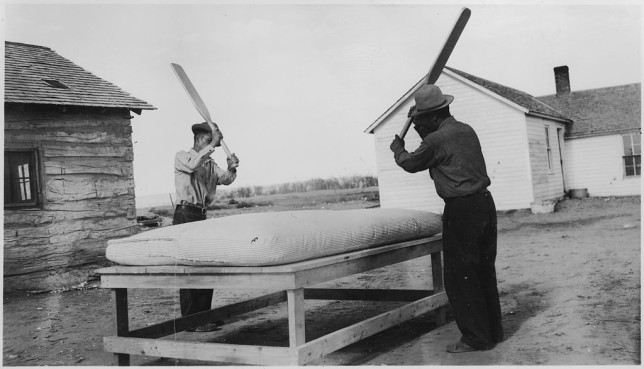 I’ve always envied improvisational musicians and performers. Not only for that real-time dialogue between audience and artist, which a visual artist can never experience, but for the ability to engage in a spontaneous collaboration, to create something in the moment with another artist.

I think about what that must feel like, that moment when you connect. It might start as call and response. You start to feel one another out. You add to their sound and then they add to to yours until a dialogue turns into one single voice. It’s something you share with them that’s impossible to articulate any other way, and together you’re able to make a sound unique from anything you could create on your own. I think it’s part of why groups of musicians stay together despite personal differences. Even if personalities clash, their musical relationship has a life of its own, its own identity.

I’m sure we would drive them nuts, but privacy allows us the luxury of being insufferable.

And this is the essence of play. Which, by no coincidence, is exactly what musicians call it. Musicians play. It’s not much different than the kind of imaginative play that kids do together. When two of us play together, when we’re inside each other’s heads in that special way that nothing else quite matches. When one person offers a premise, and the other adds their part, until a story unfolds around you both and you are able to share the same world.

I’ve experienced this to some small degree with particularly skilled editors and art directors. That back and forth. It’s still them adding their part, and me adding my part, and while there is that sense of building something together, it’s never quite the same feeling. It’s still creation in isolation. I’m still always alone during the act. So while it’s still, to some degree, playing, there is always that delay. Like tapping out a message and hoping that, when you receive your answer, you’ll both be speaking the same language. And often you are. But it’s never in the same moment. And each time, you have to reconnect. There isn’t that same immediacy and spontaneity.

But in another way, I experience something very much like this real-time collaboration almost every day. Compared to art-making, or music, this isn’t going to sound important. But trust me, it’s absolutely one of the most critical things I do.

Three days out of the week my wife works at home. And while both of us are busy with our work, there’s always time for a break when we do our thing. There’s a ritual to it. An ongoing game. One of us might present a random premise or idea, and the other will add to it. Or it might be as simple as a phrase.

Right now, the popular one is “fighting crime.” I’ll say, “Do you want to fight crime?” or, “Let’s be crime fighters.” Or I’ll ask, “What are you doing?” and she’ll say, “Fighting crime.” I won’t try to explain what this means. There wouldn’t be any point. What’s important is that we both know what we’re talking about, even if nobody else would. This, and any number of other similar rituals, might go on for days. Some have gone on for years. If someone overheard us, I’m sure we would drive them nuts, but privacy allows us the luxury of being insufferable.

And just like music, it’s call and response. But unlike music, it’s not something we can share with anybody else. It’s a kind of performance we do just for one another, something we do that’s so absurd and private it couldn’t be shared with anyone else even if we wanted to.

And we play in other ways. We sing songs we’ve made up on the spot or tell jokes we’d never tell anyone else that aren’t really funny. Often the fact of their very unfunniness is what makes them funny to us. I don’t think we’re particularly unique in this. Whether with a spouse or partner or close friend, most of us do this to some degree.

Play is a critical part of our relationship. A way we connect. But in our culture and outside the arts we’re not encouraged to do this. Imaginative play is something most of us are supposed to outgrow. At least, outside of a structured game with rules and a purpose. But play is so important that it won’t let itself be contained. Like the way we joke with our friends or coworkers. It’s not on the same intimate level, but it’s still play. It’s a critical part of how we all relate and how we form relationships. But there’s only so far we’re willing to go before we feel embarrassed or self-conscious in a way that kids never do.

And that’s why I envy musicians who can say, “Do you want to play?” That’s why I wish I could say, just like any kid would to another kid, “Can you play?” But most of us have forgotten how, or are just unwilling. Which is why I value so much the play I do with my wife. And why I value the time we spend every day we are able to get inside one another’s head and collaborate in the purest and truest sense, even more so for the fact that we have no real objective. We’re not trying to generate some result to be recorded and preserved and perfected.

Because no matter how much we try to preserve it, or how long we manage to, all art is ephemeral. And while art is typically made for an audience, even if it’s forgotten as quickly as it was created, an audience of one is enough. The endurance of an idea is not the measure of its value, and even if it only lasts for a moment, that moment can be as precious as any that can be preserved. It’s the same in both play and love: one moment, one other person, one shared experience is all that’s necessary.