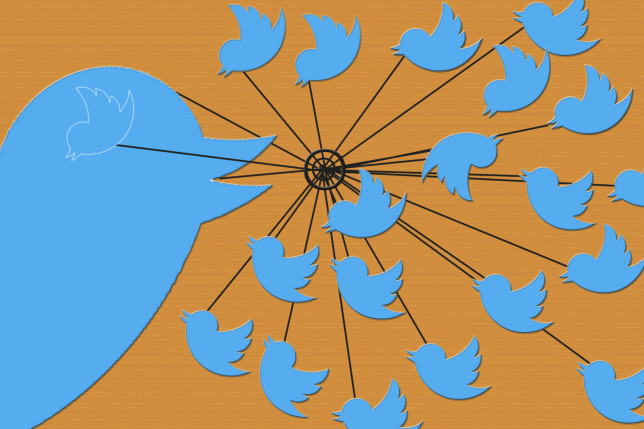 Facebook is like a cafeteria, where you generally know everyone in the room though there’s really only a smaller group of people you’d sit at a table with. Twitter is like a nonstop bar where you can step into a room full of strangers and engage in conversations.

As an artist looking to expand my reach to new audiences and build community, access to that virtual bar has been a valuable tool and led to some beautiful connections. Using Twitter, I’ve made new friends IRL (in real life), gotten articles published about my web series Bailout, and connected with other short filmmakers to coordinate screenings of our work together.

The key to Twitter though is relationship building. The biggest mistake I see many artists make is that they only get on Twitter when they want something from other people: as they launch a crowdfunding campaign, to announce an upcoming tour, etc.

The party is always going, but that doesn’t mean you have to stay there the whole time with it.

Some of the fundamentals of social behavior in real life do hold true on Twitter as well. If I walked into a bar and yelled “Hey! I’m awesome!” and then left, chances are you won’t think I’m that awesome. But if I walk in, become a regular, strike up a few conversations with folks, connect individuals who are doing similar work, share and cheer on other people’s projects—those are things that are more likely to spark positive feelings and community building.

How do you build relationships as an artist on Twitter?

One way is to practice the three C’s: curate, connect and cheer. “Curate” refers to sharing a particular kind of content on your Twitter feed. I mostly share articles about diversity (and the lack thereof) in film and television, as well as film festival deadlines. People will start to follow you and look to you as a source for the topics you post on.

“Connect” mean constantly looking for opportunities to introduce and connect people. Someone looking to perform in Boston? Ask them if they know this other musician you know there who might be able to give them some leads towards getting a local venue.

“Cheer” is seeing yourself as a creative cheerleader. Congratulate others on their accomplishments—grants, publishing, performances, crowdfunding. When the time rolls around when you have an accomplishment to announce, others are more likely to cheer back as you reach your goals.

Another useful tip is to use lists to shift through the clutter. I currently follow over 2,000 people on Twitter. If you think that means I keep up on all 2,000 accounts’ posts, think again. You should never expect to keep up on everything happening on Twitter. The party is always going, but that doesn’t mean you have to stay there the whole time with it—it’s okay if things happen without you. But, if there’s certain people whose feeds you enjoy or who you’d like to build relationships with, creating lists on Twitter can be a useful tool. Lists are like a filter that allows you to select a limited pool from your feed to read. The lists can be public or private. I have a number of private lists in Twitter: people I know in real life, other indie filmmakers, organizations that give grants and fellowships to artists, other Iranian American artists. The lists can be whatever is interesting and useful to you.

Some people naturally love being on social media all day. I’m not one of those people, but that’s likely because my day job is as a social media specialist which requires me to spend most of my online mental bandwidth on the organization I work for. To maintain the activeness of my personal Twitter account, I schedule Twitter login in times for myself; it is a recurring item on my electronic to-do list. I allow myself 15 minutes a few times a week to spend time on Twitter, ensuring that I don’t get overwhelmed or fall into some Internet black hole in which I look up and price out every make-up brand Mindy Kaling wore last month (which has happened to me when I didn’t have better boundaries for myself).

I make sure to interact with at least a few people on my lists, post some stuff on my own, and if I know I’m going to have a couple of busy days ahead maybe even schedule out some tweets to go out later using Tweetdeck.

With some good practices and realistic expectations, you can start making connections and building your creative community online. (And invite me to be a part of it by tweeting me at @tumeric .)