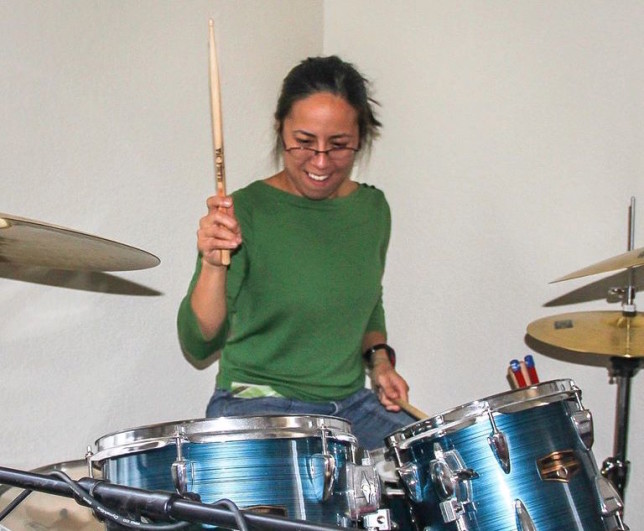 The very afternoon in May 2014 that I became band-less, I drove to the local music store and bought a shiny new ride cymbal. This hardly seemed reasonable, considering I had no gigs or rehearsals, no real music obligations on the calendar for the foreseeable future. I had a practice room and time.

For most of my adult life, I’ve played in bands with varying degrees of regional success. And like most bands, they dissolved. Somewhere in between, I went to grad school and became an occupational therapist, so the bills were paid. But as I approached summer 2014 with an open creative agenda, I contemplated my usual post-band course of action: either A) devote my newfound free time to a pet home-recording project or B) not pick up an instrument for months or even years.

I went in to face all the fears and creaky aspects of my drumming.

Instead, I made a conscious, curiosity-driven decision to keep playing my instrument and making music, even if there were no tangible means-to-an-end in sight. To play for playing’s sake. To practice because it seemed a more productive option than not practicing.

In this Course of Aimless Band-less Practice, I discovered five aspects of my creative life previously unbeknownst to my feeble gotta-record-tour-and-get-reviewed-by-Pitchfork-driven brain.

1) I could no longer hide from my weaknesses.

In band situations, practice is likely only used in reference to the unit. I rarely practiced drums, but I did go to band practice to join the collective and execute the songs as a unit. In years past, I may have devoted an hour or two per month to practicing a particular part. Yet, solo time in my creative woodshed was either devoted to songwriting or jamming or office time to further the collective’s agenda.

With no collective in mind, I went in to face all the fears and creaky aspects of my drumming. I knew I couldn’t execute a shuffle. I knew I had three or four different fills available and then my rhythmic vocabulary was exhausted. I knew I couldn’t readily play along with a metronome for longer than 10 seconds or shift a subdivision mid-measure. I didn’t really understand time signatures. I knew I could not read or write a simple drum chart.

So what to do when you don’t have a band other than confront all the shitty parts of your playing head-on? There was no one to hear me, no one to impress, no one around to speed me along or hold me back. I had freedom to be ugly, get mad, be simple, and slow things down to the speed of dripping molasses. In the role of student, I finally freed up that part of my ego to ask for help and be constructively criticized and uncover as many weak links as I could find.

It’s funny being part of a band. It’s like being in a gang. I imagine Bonnie and Clyde hitting the open road, madly in love and armed to the teeth. Otherwise the guns appear pointless without the romance of the gang. But I suspect Clyde Barrow would have remained a gun owner without the love of Bonnie. This is what I discovered in the practice room.

I was still fond of drumming and music. I still enjoyed the discoveries of the limb independence to play seemingly impossible patterns. I enjoyed the ergonomic and spatial challenges of setting up my drums and cymbals in optimal positioning. I still squealed at the faint sounds of tape hiss and behind the studio squeaks and clicks on my favorite recordings. I still teared up at the words of wise masters revealing their process and the universal truths of learning and playing and growing. Clyde Barrow would have been on the lam and ended up shot in a car without the love of Bonnie. It’s just who he was.

3) My head came out of the creative sand.

When not in a band advancing an agenda, I suddenly found myself out of the Mousewheel of Regional Booking-Promoting-Gigging. And when honest with myself, I knew that the goings-on with other successful local/regional bands in days past usually sent me into panic/anxiety of all that I wasn’t getting done for my band or my individual musicianship.

Not every artist is like this, but with the compression of time and resources of my day + music job + family/personal relationships—perhaps coupled with my respective personality disposition—I had little wiggle room to process my anxiety in a healthful way. I did not have (or did not make) the time to see what other bands and songwriters were up to in town, unless we shared a bill. I saw my gigging life as a twofer, fulfilling the creative obligations mixed with social benefits/hobnobbin’ with fellow musicians for that night.

Sans band, I suddenly had time to explore the goings-on with the various scenes. Worlds opened up beyond music, into art openings and theater. Since I had no personal agenda to advance, I could freely click on links passing on my Facebook newsfeed. I could stop and take in a band or artist without pangs of “I should/would/could/need to.” I could observe drummers without feeling shitty about my own playing, and instead simply be inspired to take ideas back to the Aimless Practice Space. I suddenly had a sense of what was going on around me and exactly how much inspiration was to be found if I opened my eyes, ears and heart.

4) I became a better band member

It’s quite annoying to say, but bands really are like relationships. I’ve contended with my own magical thinking regarding falling in love, and have come to grown-up realizations that you have to have your own personal shit attended to before being a somewhat functional romantic partner.

At the start of this 20 months of Aimless Band-less Practice, it was simply about using spare time to explore and play around with concepts, ideas and technique on the drumset. But when you actually attend to your own personal shit, just like with relationships, you inadvertently develop functional skills like better organization with both time and material, patience, taking creative risks, and having a sense of humor that—lo and behold!—transfer quite nicely to any subsequent band situations. All this and a few better technical skills on the instrument to boot!

After 20 months of respite from attending band rehearsals, I have ventured into a new project that feels flowing and exciting and creatively satisfying. I have a sense of exploration within a collective. I am curious about the process and how ideas develop when given a little more breathing room. I understand how to care for my piece of the rhythmic and musical puzzle within the unit. I have a better sense of the areas of my life (including a personal drum practice) that I protect in order to remain less grumpy overall.

5) I found my real audience

Planning a recent solo road trip, I spoke with my mom about the logistics of my timeline and anticipated stops to make it to my destination safely. I could hear tension in her voice, as she is never quite fond of her youngest child/only daughter alone on the open road. “Well…you’ll be okay I think,” she said, attempting to reassure herself more than anyone, “Maybe take your guitar! That way you can stop and play to make yourself feel better.”

She seemed to perfectly capture an understanding that maybe I didn’t have until this time of Aimless Band-less Practice. Admittedly, it still creeps into my psyche at least biweekly: Why am I doing this? No one is listening. There’s no band to shove down your friends’, family members’, co-workers’ throats. There’s no end product to push.

But with consistent practice, the real audience takes notice. Mom and girlfriend and officemates and old and new friends acknowledge that I’m a drumming fool and general musical being. They know I troll music stores and Craigslist weekly to gawk at used gear. They don’t flinch when I miss their call and text that I’ll call them back in an hour after I’m done with studio time. They let me disappear to a corner of the garage with guitar in hand to chase down a melodic idea. They gently ask me to tone down my finger drumming on the restaurant table, but let me work on the pattern with hands on lap in the passenger seat on the drive home from said restaurant. And they never ask why I do it or if they can hear something I’m working on. They just know it’s what I do and it makes me an increasingly good-humored, more tolerant and less lonesome person.

I don’t mean to make myself sound all misanthropic or antisocial (please refer back to number four), but I now know why mom recommended the guitar come with me on this upcoming road trip. With 40 trips around the sun, most of those years have been injected with music-making of some sort. The loneliest times for me has been extended periods of not making music, not necessarily being band-less. Mom wants to make sure that my most trusted friend is along for the ride to take me where I need to go.

Teresa is a drummer, occupational therapist, and songwriter based out of Albuquerque, NM. In her studio, you can find her teaching her amazing students or breaking down the minutiae of her own playing at Drummer Anatomy. On stage, she’s the current backbeat of the soul punk band, Prison Bitch.

View all posts by Teresa Esguerra →