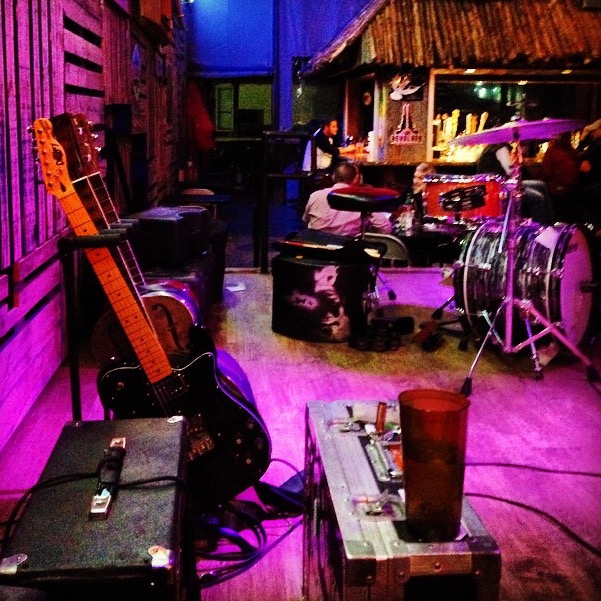 In all the blogs I’ve read on indie promo, touring, marketing and the like, I’ve never seen an article written about the harsh reality of what being an independent musician means for me and many of my peers, including some that are several steps above me on the “ladder of success.” No matter how hard you work or how compelling your music is, you may never garner a huge fanbase. This isn’t necessarily a negative thing, it just seems like no one talks about it. Countless articles trot out the same advice over and over about how to effectively promote your music and tour, etc., and, with varying degrees of intensity and success, I’ve followed a lot of that advice on how to “grow an audience.” How to “build a fanbase.” Sounds weird to me—like gardening or carpentry tips.

The situation I’ve just described could be as good as it gets for a lot of us.

Unlike gardening and carpentry, however, getting more fans involves convincing people to do something, and there’s no sure fire way to do that or guarantee that it will work; people are fickle. I talk to peers all the time about various gigs and venues to play on the road, and one phrase that always seems to pique a musician’s interest, aside from “guarantee,” is “built-in crowd.” Mind you, the musicians I talk to about these matters are for the most part at the same level of financial success and popularity that I am, i.e., none of us are that well known, but we have publicists, we have booking agents, we’re on record labels, we tour a lot, and we’ve been doing it for a long time now, and have figured out how to make music the center of our lives.

For lack of a better word, we’re professionals. If you look at our websites and social media pages and press kits, you’ll see that we’ve garnered considerable praise in major press outlets and done some high profile gigs and tours. And we sit around and talk about how great it is to play some bar because people will just be there. A built-in crowd. We don’t have to worry about our name or our relentless promoting being the sole factor in filling the house, because it won’t.

Let me paint a picture of how a typical night on tour plays out for someone like me and some of my peers. Recently, my band played in Dallas, TX, a city we’ve probably played at least 80 times, at a club we’ve probably played at least 30 times, signed up hundreds of people to our mailing list, sold hundreds of T-shirts and records. And it’s just like most of the places we play on the road—every night, about half the crowd is hearing us for the first time. About 60 people were in the crowd while we played. I would estimate roughly eight were friends, 10 were musicians in the other bands and their girlfriends, and about 15 to 20 were fans—some of them I recognize and know because I met them at shows and they continue to come out to see us play and buy records and stuff.

Within my hazy margin of error, that leaves about 20 to 30 people who just decided to go out that night and stumbled in to the club, or they were fans of other bands, or they knew the bartender, or whatever. Even if some of those people were actually there to see us and I just didn’t know it, that’s still about half the room seeing us for the first time.

Honestly, I’m okay with it because I like to play music on stage.

And this is how it is most nights for us, night after night on the road, and for many of our friends as well. Like I said before, I don’t view it as a bad thing necessarily; a lot of those newcomers might become fans of some sort, whether or not they ever come out to another show or buy our album. They might not do anything beyond looking us up on Spotify and showing their friends our music while they’re hanging out in a bar and exclaiming, “Saw this band a few weeks ago. They were badass.” I don’t know. It’s difficult to track that kind of thing, but it happens, and it helps. It isn’t bad, it’s just a reality that a lot of people don’t seem to acknowledge—we indie musicians are all supposed to be trying to “make it” (a term that has as many meanings as there are users), but the situation I’ve just described could be as good as it gets for a lot of us, hard work, compelling music, blood sweat and tears be damned.

And after being filled with optimism after reading tons of articles that basically say, “If you just work hard enough, if you just make your music great, etc., you’ll be HUGE,” a musician could easily become discouraged or worse, as the scenario I’m describing here could be seen as a comparative disappointment.

Honestly, I’m okay with it because I like to play music on stage. To any musician who is banging their head against the wall over their seeming inability to hit the big time no matter how hard they work or how good they are, I would ask, “Did you sign up for this because you like to play music or because you want to be rich and famous?” If the answer is the former, then get on that stage, and rock that half-empty room full of people who’ve never seen you before. It’s been said many times, but I’ll add my voice to the chorus, as I sincerely believe it: If you’re connecting with those people and really into your performance, it really doesn’t get any better, no matter how big the stage or crowd is.