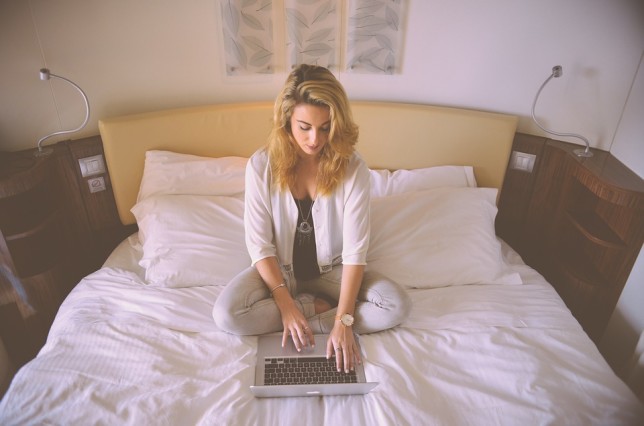 I got called an entrepreneur today.

But I have no storefront, no negative reviews to deal with (yet), no unhappy customers, no silverware stealing-employees, no long meetings with people in suits (thank God! I’ve spent enough of my time in those).

So I never think of myself as an entrepreneur. Entrepreneurs are people who have to hustle all day, negotiating and making deals, while I can do a good day’s work in four hours and then take a nap if it suits me.

These creatures run around from meeting to meeting, usually in an ill-fitting suit.

Getting called an entrepreneur made me wonder if the way we think of business is changing. When I started my life as a freelancer, I got asked when I planned on getting a real job. Now the first thing people say is, “You work for yourself? Cool! How do you do that?”

Here are my five secrets to being a successful small-scale entrepreneur:

1) Get Clear About What It Is You Have to Offer

I’m a writer, but you may have noticed there’s about, oh, five billion of us out there. So how did I figure out what makes me different? I listened to my clients, even in the beginning when I only had one. I’m a fast writer, an accurate writer and a reliable writer. I’m good at putting people at ease, and getting even seemingly boring people to say interesting things. Apparently that sets me apart without even getting into specialization, which I’ve only started to dive into.

Maybe you also do something a lot of other people do. Figure out what it is about you—your process, your approach, a certain skill set—that makes you stand out from the pack. And then market the hell out of it (and by market, I do not mean spamming all your followers on Twitter and Facebook. That is not marketing. That is annoying. Two different things.)

2) Sometimes, You Have to Hustle

People who look at my life with envy often don’t realize what it took to get here. Three-hour breakfasts? Naps in the afternoon when required? Sure. But I wasn’t doing much of that in my early 20s while I was building my client list. And even when it seems like I’m taking it easy, I always have my eye on the months to come. If those months seem slow, you better believe I’m getting in touch with my clients and letting them know I’m available. Will they contact me if they need me? Probably, but I still put myself out there. It never hurts to remind people that you’re alive and willing to work, as long as “reminding” doesn’t turn into “stalking.” Companies don’t tend to hire freelancers who stalk them.

3) Get Comfortable With the Unpredictable

Here’s two other things that are said to me a lot: “You’re up early,” or, “You’re up late.” When you’re your own boss, there are no set hours. You work when there’s work. You’re probably going to work through a lot of weekends and evenings, even long weekends. How else are you going to make up for those random Thursday afternoons when you decide it’s a good time to go Christmas shopping? It balances out.

Another note about unpredictability: I don’t suggest going into business for yourself without savings. You will have busy times and lean times, and lean times are awesome for long-range planning, focusing on smaller-but-still-important projects, and cleaning that house. If you have savings, you don’t have to waste those precious lulls worrying over how you’re going to pay the mortgage. You probably will still worry, just not as much. And that leads me to…

4) Accept That Worrying Is Normal

If you’ve worked for a large corporation, you probably had a stressed-out boss. I had several. These creatures run around from meeting to meeting, usually in an ill-fitting suit, arriving early and staying late. They often grab lunch at their desks, and if they do stop to chat for a moment, they’re looking uneasily over their shoulder, as if at any moment some huge mountain lion is going to pounce.

Being an employee can be stressful too. But the closest you will ever get to understanding a CEO is working for yourself. All those things your boss worried about? They’re now your responsibility. Maybe you don’t have a board or an accounting department, but the day-to-day stuff? How to pay that bill, how to expand the business, how in the hell do I pay taxes? Yep, that’s all on you now. So a little worrying is normal. Just use it to spur you into action (see point number two).

It’s human nature to dwell on what we don’t have. When you work for yourself, you won’t have those nice, seemingly free benefits (you did know you were paying for those, right?). You may not have people stopping by your office to ask about your weekend. You won’t have a regime or schedules or someone to keep you on track—unless you build those systems for yourself. You won’t have a paycheck that arrives like clockwork every two weeks (unless you’re really, really lucky. I’m still waiting to get paid for work I did in December.)

But if you obsess over that stuff, the best thing you can do is get another job in an office. Because you’re missing the point. And the point is all the things you do have, and number one of those is Freedom. Creative freedom, personal freedom, the freedom to set your own hours and turn down projects that don’t interest you. And freedom is priceless. Do you know how many cubicle drones would kill for freedom? So miss your old coworkers for a minute and then shut up about it. Cause you can always meet them for lunch. And then have a nap while they drag themselves back to the office for yet another meeting.