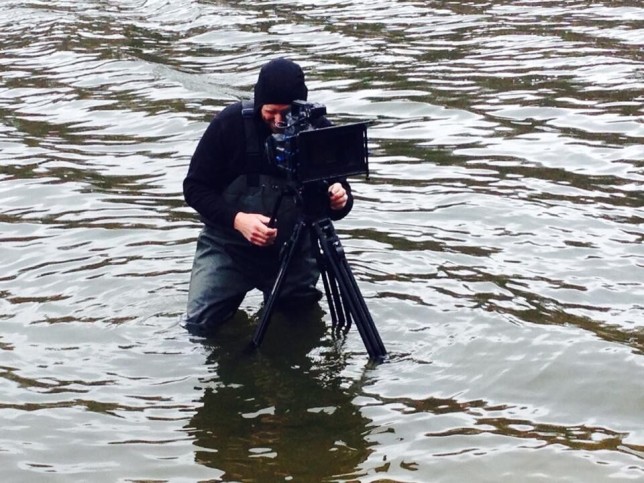 Behind the scenes from the production of Search & Rescue.

Nate Gubin is the director of Search and Rescue, which is making its Albuquerque debut at the Guild Cinema on April 23, at 9pm, as part of Albuquerque Film & Music Experience.

In film, an idea becomes a script, that script becomes a shot list. If you don’t get all your shots during production, you won’t have a movie. Or maybe you’ll have a movie but it will have a lot of stock footage in it. Tip: An aerial shot of the Statue of Liberty pretty much works anywhere.

In improv, an idea becomes an offer from one performer to another. Agreements are passed back and forth until the “game” is found. That seems funny, lets add to that, lets push that idea up and up until it no longer makes sense. Cut to the Statue of Liberty.

Search and Rescue is a comedy film/experiment inspired by a true story. My friend’s wife kicked him out of the house (for good cause I might add). Rather than stay with friends, move home with his parents, or get an apartment, he camped in the woods behind where he worked. In the morning he’d take a “monkey bath” in his employer’s bathroom sink. After work he’d sit in a lawn chair next to his tent and drink beer. On the weekends his kids would visit. They’d make s’mores and tell ghost stories around the campfire. I thought his hobo lifestyle was outlandish and tragic, i.e., comedy gold.

Rather than write a script and search for actors who could play the parts, and be willing to spend nine days in the woods for no money, I found the actors first and designed a project that would play to their strengths. I saw both Ken Breese and Brian Donnelly perform improv and sketch in Boston. I could see their strengths and I knew what audiences liked about them. For example, Ken has an amazing singing voice, so in the film he belts out emotional ballads while dreaming of singing at his brother’s wedding. Brian is a one-man show; I’ve seen him do an entire scene, with four different characters, all by himself. In the film he uses his hands as angry puppets, a stick and two rocks become dysfunctional family members. He’s like having six cast members in one.

Originally, I wanted to work from a simple story outline and improvise the entire movie, and not just run-of-the-mill improvisation; I wanted the guys to “clown face,” wherein they would come to a scene completely neutral. You come with nothing and stand there, looking into your scene partner’s eyes, agreeing on an emotional truth before beginning the scene. It can work great on stage, but when a 30-second scene runs nine minutes and you have nothing to cut away to (and you’ve already used Lady Liberty twice)… you’ve got a long slow movie and a post-production nightmare.

We ended up writing a loose script that left room for improvised gags. A flexible shot list allowed us to roll with the production punches. Locations could be quickly changed due to weather and daylight. Entire scenes could be deleted and new ones added on the fly. We still had a beginning, middle and end, but the scenes could be shifted around inside those sections.

The appetizer came with ranch sauce because we forgot the marinara. The rice burned so we served spaghetti. I was hoping for sprinkles on the ice cream but caramel is good too. It’s not what we planned, but dang, this meal turned out tasty.

Search and Rescue is screening during the Albuquerque Film & Music Experience on April 23, 9pm, at the Guild Cinema. Get your tickets here!