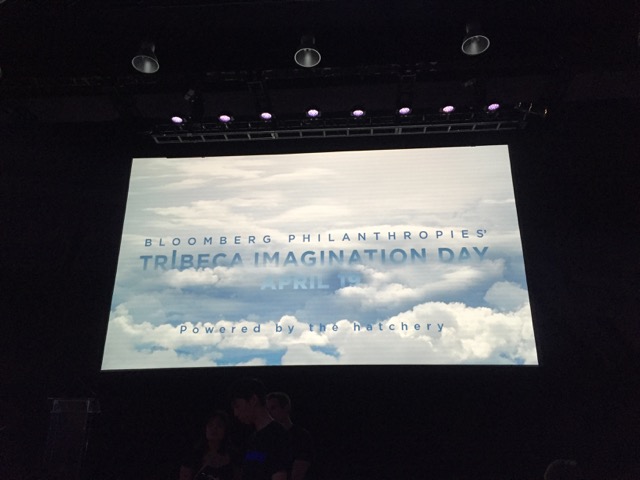 The Tribeca Film Festival is notorious for exploring world innovations and new ways of storytelling. The festival organizers and attendees push the limits of how we view the world, not only through filmmaking, but through their exploration of virtual reality, hacking, body cameras, visual art, interactive exhibits, technology, medicine, business.

It is an overwhelmingly inspirational environment. The Imagination Day at the Festival Hub was sponsored by Bloomberg Philanthropies, and gave access to guests such as gentleman powerhouse Sir Richard Branson, Bryan Johnson, who runs a huge fund dedicated to creation, and Virtual Reality filmmakers, Felix and Paul, to name a few.

Here are their tidbits of wisdom for those wanting to create, to change, to take on the world…

When asked about the fear of failing, Mr. Branson said, “I’ve never been interested in making money out of them [his companies], so I’ve never been afraid of failure. I’m fearful of anything that could damage the reputation and brand.” He also said that it was important to him to, “compete in an ethical, fair way,” but to, “be firm when you have to.” He stressed the importance of an entrepreneur’s obligations to tackle world issues, calling his fellows to arms, “If every single company in the world could adopt a problem, all the world’s problems would be solved.”

He is a prime example that you don’t have to give up manners, or your soul, to be wildly successful.

2. Traits of a Good Leader—Richard Branson, the Virgin Group

Sir Branson stressed more than once the importance of listening. We could all take a page out of his book.

3. We Can Create What We Can Imagine—Bryan Johnson, OS FUND

This incredible mind, and proud family man, founded Braintree, which conveniently sold to PayPal for $800 million. Not content, he then used some of that money to start up the OS Fund, which invests in scientists, or “Matter, Life and Mind” as he puts it.

In other words, he’s trying to change the world and focus on the wonders of new developments. One of the most inspirational people out there, he states, “He [Leonardo DaVinci] can sketch; we can build.” He emphasizes that today we can literally make real just about anything we can think of. “We have the ability to author, to program any kind of world we can imagine,” and puts the burden on us. “Storytellers define how we understand ourselves. You are the ones who choose what stories to tell.”

So, the real questions from Mr. Johnson are, “What kind of world will you create? What kind of heroes?”

Mr. Iwata is the Vice President for Marketing and Communications at IBM, and had a lot to say about AI in the real world. Of course, IBM has Watson, the supercomputer that is widely known for beating chess and Jeopardy champions, but outside of the spotlight is working and solving problems in retail, finance and medicine.

Mr. Iwata says that Watson, already understanding unstructured data, will be trained to have vision, UV and infrared, and will learn to hear in the near future. It will be able to read x-rays, listen to problems as a train is running. Mr. Iwata says that in 2011, we entered the “Cognitive Computing Era,” and that soon, “if it’s digital and connected, it will be cognitive. It’s inevitable.” But, don’t worry, film is now better at representing nuanced looks into AI, and “if film can help us think about, have conversations about, relationship between machines and people, well, that’s a great thing to do.”

We are on the cusp of a great societal change, and in the words of the great Sir Ridley Scott to Watson, “Don’t go rogue.”

He worked for Apple in “that” era, he advises Presidential administrations, hundreds of top businesses, NASA, MIT, and The Economist labeled him a “leading global futurist.” This guy is the guy for cool innovation—and right now he is focusing largely on medicine.

Things foremost in his brain are changing the medical mentality from treatment to prevention, and that age-related cognitive degeneration is one of the world’s biggest problems. He says there are countless opportunities for start-ups and innovators in this field, and challenges us to ask, “What can we possibly imagine to solve problems?” i.e., go outside not only the box, but the house. Well, some of these things to kickstart your mental engines are cybernetic enhancements, nano devices, blended realities, total recall of information, re-programming genes (CRISPR), nutritive genomics, AI in the cloud.

6. Don’t Be so Quick to Say “No.” Always Go With “Maybe”—Meredith Perry, uBeam

“Outthink the top thinkers by thinking radically different,” declares Ms. Perry. This is something she knows a great deal about building a technology that according to many experts can’t possibly work. She is not an engineer, but she is surely working with some of the best to further develop her incredible idea of wireless charging through ultrasonic waves. $26 million of investment is propelling this amazingly ambitious woman forward. People are sometimes not as expansive “because someone in the field knows too much. This can hinder creativity.” Basically, go outside of your comfort zone. Open your mind to any possibilities, and don’t discount your projects just because one person says it’s stupid or impossible.

7. Virtual Reality Can Teach Us to Be More Present—Félix Lajeunesse and Paul Raphaël, Felix and Paul Studios

Félix and Paul have been working in cinematic VR experiences for over 10 years. They have created experiences for Jurassic Park, worked with Bill Clinton, Lebron James, Cirque du Soleil. With Strangers they explore a musician composing music, and with their Nomads series show us lives far different from our own. They define RV as a whole new form of human expression, that it has the “capacity to elicit a state of presence.” Sometimes the camera can be “a friend who is visiting,” or can “place the viewer in the scene.” The illusions that they create aren’t illusions at all, but give us experiences that are both powerful and fragile. They are helping humans experience the world differently.

We have to remember when viewing human experience versus new technology, not to view it as something that isolates or disconnects. It can “actually train us to be more present in reality as well.”