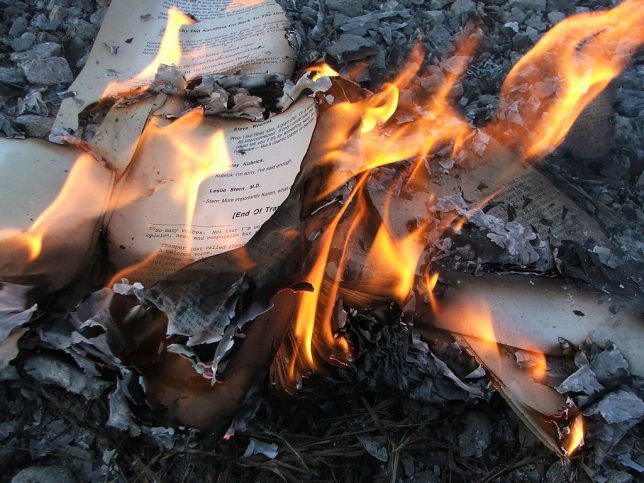 There’s a double standard in the writing industry. Agents complain about writers all the time—if you check an agent’s Twitter feed or blog, there’s bound to be some not-so-nice comments about the writers who query him or her.

But if a writer wants to complain about an agent who behaved inappropriately? Cue the backlash. With the fears about being branded difficult to work with, or the risk of getting on some fabled blacklist, most writers stay quiet when an agent has done them wrong, sharing their experience only with close writer friends.

“He held on to author checks when he miscalculated his own finances and needed money to get by.”

Yes, writers are querying agents—not the other way around. But that doesn’t give agents the right to treat writers with less respect than the neighborhood barista. So, under the cloak of anonymity, here are some scary true stories of agents behaving badly. The next time an agent slights you, reread this post with a glass of wine and know You Are Not Alone.

THE REJECTION FROM HELL

“I once had an agent send back my query with a big red NO written on it. Priceless.”

“I had an agent tell me my full read like I wrote with a thesaurus and was ‘trying to sound better than I actually was at writing.’ And to ‘consider another profession if this was going to be my full-time goal.’”

“The agent actually used my own SASE to send me an ad for his ‘How to Get Published’ book. I kid you not.”

Rejecting authors, many of whom are really nice people, must be tough. Still, that’s no excuse to lead a writer on. It’s much better to just say no. Imagine thinking you’ve landed an agent, only to have this happen….

“My ex-agent listed editors he knew would love my book when we first met, couldn’t wait to get me out on sub, suggested this and that to improve the manuscript. I sent it back revised, didn’t hear (from him) for months, emailed him to be told maybe my third or fourth book might be ready to sub out to editors but not this one! Then, when I brought up our first meeting, denied it ever happened.”

“I got a full request and an email six months later that said she loved the book and wanted to offer rep but her client list was too full and to check back in a few months. Okay, odd. But I was so excited and naive. I emailed back a few months later to check like she asked and the email returned as undeliverable. I searched but the agent and agency was gone. To this day, I have no idea (what happened) since the agency page had sales and clients. It looked real. Glad I never had to work with that agent!”

One writer had actually signed a contract of representation with this agent when she received the following rejection from him:

“I have come to the conclusion that I can’t represent your work. My enthusiasm for the project is not where it should be. I am not the right agent for you. I am very sorry to write you with this news. My greatest hope is that you can resubmit to agents that might be more dedicated to the task of finding you a good publisher.”

DO YOU EVER GET THE FEELING THEY DIDN’T READ YOUR MANUSCRIPT?

“Had an agent tell me once that they didn’t understand why my character was a lesbian dating a guy, so she couldn’t comprehend the love story, and that the voice sounded middle grade like Harry Potter since it was written in British English. The character in question was a gay male who had a make-out session with his boyfriend, and boners (plural) were mentioned.”

“‘It reads like you’re trying really hard to capture the idea of what a black, sporty teenager from the South sounds like, instead of trying to sound like Adam, the character, telling the story. It doesn’t sound natural, and it makes for an awkward and distracting read.’ The best part? My MC wasn’t black. He was Persian. And literally in the first paragraph of the MS, he said something about his mother being from Tehran.”

“My agent routinely stood me up for the most bizarre reasons. Whenever we had a phone call scheduled, it would rain in New York, which–according to her–made the power go out and rendered all phone lines useless. Whenever we actually did talk, her husband would suddenly call on the other line and she’d have to let me go.”

“Back when I was querying my first book, an agent wanted to talk. I got super excited, and we scheduled a time. Then a hurricane hit NYC and she (understandably) asked for a reschedule. I said ‘Sure!’ We rescheduled once, then twice. Then, after I’d rearranged my classes/project deliveries to be able to make the call, I’m home, waiting, and instead of a phone ringing, I get an email saying, ‘Not ready to offer rep yet, but look for my notes soon.’ It really hurt. I wasn’t expecting rep (rather, I was expecting an R&R), but to go around all those hoops to have her cancel LAST MINUTE? Jesus, you could’ve just talked to me and asked for an R&R. Also, I never got the notes.”

BAD BEHAVIOR TO THE EXTREME

“The agent tweeted a line from my manuscript, but completely twisted the context to make a funny joke on social media.”

“He held on to author checks when he miscalculated his own finances and needed money to get by.”

Do you have a story of an agent behaving badly that you’d like to share? What’s the worst story about the publishing industry you’ve ever heard?

PS…The first episode of my podcast, The Write Cast, is now up on Soundcloud. We’re talking writing retreats and conferences: friend or foe?