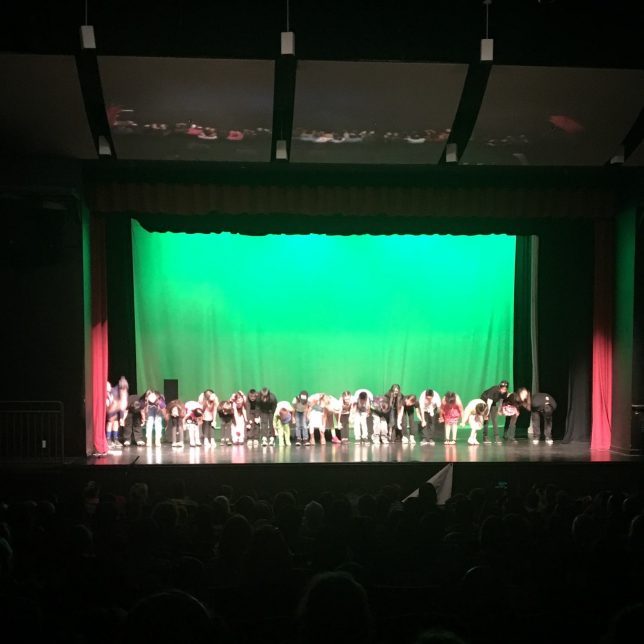 I first met Barney Lopez at my daughter’s pre-school, where he was the teacher in the classroom next to my daughter’s. Several months later I realized he was the bass player for the Red Light Cameras, who at the time was a new band hitting big. Not long after that, my daughter wanted to take theater classes at school and I learned not only that Barney was the teacher, but that he was heavily involved in Blackout Theatre and a whole bunch of programs bringing theater to Albuquerque’s kids.

My daughter was just three at the time, and Barney was the first of many creative folks I got to know who both worked in schools and as musicians, actors, playwrights, and all kinds of other creatives. I loved seeing the dual lives of these dedicated folks, busy engaging kids’ minds during the day, and in their off hours having art openings, CD release parties, theater openings, and book signings. It made me feel our kids are in good hands.

Barney is still working with kids through theater programs, and is helping raise funds for a program called Wrinkle Writing which brings theater education to area schools. I talked with him last week about the program and about how teaching kids theater can help both kids and teachers alike.

Peri Pakroo: Hey Barney! I’m super excited about the Teacher’s Lounge event coming up! Thanks so much for putting it on, and for taking some time to chat about it with me. First off, please clue me in. What is the Wrinkle Writing program?

Barney Lopez: Wrinkle Writing is a theater education program that sends professional theater artists into the schools to help kids write and perform their own play. We work with the students throughout the school year and it culminates in a showcase of the students’ plays for family and friends. We just finished our fifth year and reached over 700 students.

Awesome! This is in conjunction with Blackout Theatre, right?

Yes! Wrinkle Writing was actually started in the ’90s by Susan Pearson. It was run by UNM for over 10 years. They eventually handed it off to Popejoy and they stopped doing it. Susan Pearson asked Blackout to revive the program and we jumped at the opportunity.

I’d love to know a bit more about your involvement with both theater and teaching. How has your body of work evolved, in terms of integrating theater with working with kids? Which came first?

Well, I think I’m still a kid who loves playing. I think that’s the root of it. I’ve always been great with kids. I have a lot of fun playing meaningless games and goofing off. I think that’s what drew me to theater. It’s a lot of fun to create stories with your friends. That’s how I approach my theater classes. We form a tight bond in the class. When everyone feels safe acting like a bunch of idiots, we’re ready to create a play.

I remember watching a class or two with my daughter and I can see that! It also seems like a great way to combat teacher burnout: to find the fun in it. My whole immediate family (mom, dad and sister) are public school teachers (folks are retired now) so I know about the burnout factor. Do you see that too?

Oh totally. That’s why they give teachers the summers off.

I think that the teachers love having us in their class. It gives them a break from their regular lessons and gets the kids out of their seats and moving. The teachers also have something fun to work on with their kids when we aren’t there. 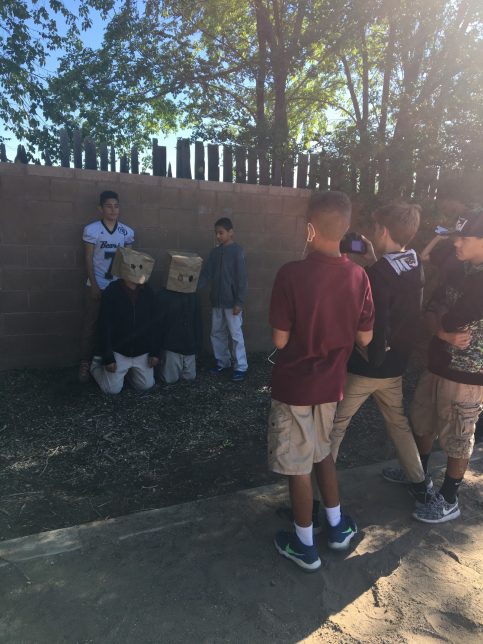 I would imagine the teachers might gain some ideas for working with kids in the various aspects that are involved in theater, right? Like, writing, staging, collaborating with cast/crew, rehearsing, etc. Lots of opportunities to engage different aspects of creativity.

Definitely! I think one of the greatest aspects for the kids to learn is completing a large project. Making a play is a long-term project with many moving parts. It’s not something that is gonna be finished in one lesson. It’s several weeks of work. That’s more realistic for students to learn because that’s the way most adults work too. Completing projects step-by-step over time.

Theater is also great because it encourages learning through failure. There’s always a problem that arises that we must get past through creativity.

Problem-solving is a theme that constantly comes up when talking with artists/creatives. It is such a driving creative force, isn’t it? I feel it all the time.

Definitely. I love it when a problem comes up in the creation process. It excites the students more than it frustrates them. They all want to figure out a way to fix the play and make it work.

Ok just a couple more questions: Please tell me about the fundraising event at the Ocotillo Room on May 27. What’s on the lineup?

So the show on May 27 is going to feature musical performances by teachers from across the city. It’s going to be really cool to see these teachers in a different element. All proceeds from the show will go to support the Wrinkle Writing program.

Personally I think the event looks really cool as it both supports and brings awareness to students AND teachers. Any specific musical genres?

Come to In The Teacher’s Lounge: A Night To Support Student Literacy on Friday, May 23, to support teachers, kids and literacy, all while enjoying these seriously talented musicians! Live at the Ocotillo Room at 508 3rd St. SW in downtown Albuquerque. Just $5. 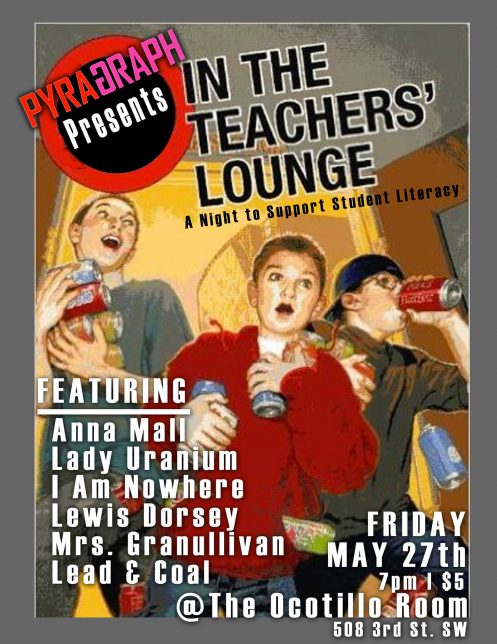