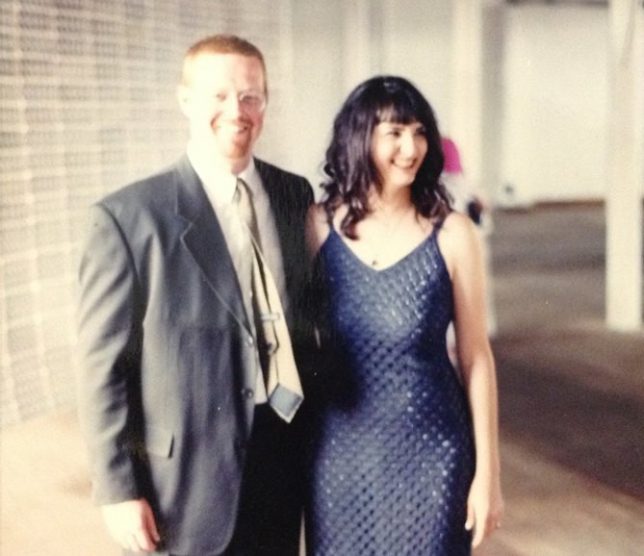 T-Minus 9! This post is part of an 18-post countdown to Amy Stacey Curtis’ next and final solo biennial in Maine mill space. After MEMORY, her upcoming biennial, she will have completed nine solo biennials over 18 years, with 81 massive interactive works, all told. She’s been unloading her process on Pyragraph as we countdown to MEMORY. Read the series here.

My husband Bill is my #1 art assistant.

I’ve talked to a lot of women artists who did not have support toward their passion—their art—from their husbands nor partners. I’m not talking about monetary support; I am talking about positive energy, effort, encouragement, even enthusiasm.

Some of these artists made their art on their kitchen counters and dining room tables, only after their husbands and children were asleep. These artists were allowed to keep their art and a small amount of materials hidden during the day in a closet, mudroom or under a bed.

Before I talked to these women, even before I knew I was an artist, I knew how lucky I was to find someone who supported me and anything I wanted to do.

Bill drove from work in Gray, Maine, to Lewiston, Maine, to help every weeknight.

I first met Bill Curtis—well, flirted with him—in high school calculus (1987). Both of us seniors (at Massabesic High School in Waterboro, Maine), I sat in the front row, Bill in the back. And every time the teacher was the least bit funny, I laughed and turned my whole body to look at Bill. Bill would turn red, not only because I laugh loud, but also because everyone else turned to look at him too.

Bill was shy, and I was not.

Because I guessed Bill would be too shy to call, I called him to ask if he would take me out on a date. “I would like to go to a movie (I wanted to see Hellraiser) and McDonald’s.” I would have my first glimpse of his support and efforts when he practiced driving to my house days before this first date. He would also stay after school to help me paint things for various school clubs.

He had no idea what was coming.

We were together through our senior year, through to the summer before our last year in college (at the University of Maine, in Orono), when I asked him to marry me. I didn’t wait for Bill to ask, as I had a plan and a schedule. We married August 28, 1993, the summer after graduation.

In 1998, when I started amassing materials for what would be my first solo biennial of interactive installation, Bill didn’t complain nor discourage me in any way. As boxes literally filled our small apartment in Gray, Maine (and continued to fill our apartment through my fourth biennial), Bill never protested nor voiced any kind of discontent. In fact, he did the opposite.

Both of us working full time, when I had two-and-a-half weeks to install my first exhibit, Bill drove from work in Gray, Maine, to Lewiston, Maine, to help every weeknight, and worked with me in the mill all weekend long. Each day we worked past midnight.

When I removed the first jar from its shelf at the end of my first exhibit, and I started to cry, it was Bill who suggested I put the jar back and we go for a walk around the mill.

And it was during this walk around the mill, that I came to this multiple-mill, multiple-exhibit idea, which in turn helped me “get through” the process of taking down this first exhibit.

When I say, “Bill has always been supportive,” the things I describe above are the “tip-of-the-Bill-Curtis iceberg.” Bill has helped me through the hardest parts of my life.

And, now that I’m working toward my final biennial, 18 years later and feeling all the feelings that comes with this, Bill continues his positive energy, effort, encouragement and enthusiasm.

He makes his lunch on a tiny section of our kitchen counter as I use the rest of this surface and our kitchen table for days, to make and process objects for my final biennial exhibit. He asks, “Would you like me to move that for you?” And he says, “Everything’s going to be alright.”