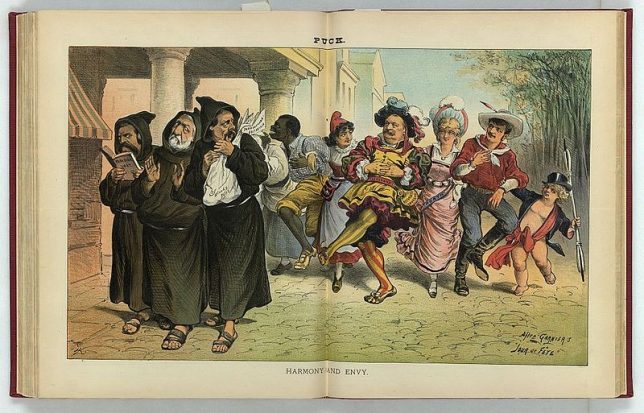 “Harmony and Envy.” Image courtesy of Library of Congress.

I love your work. I really do. But it’s time I told you the truth. Under this veneer of admiration lies a seething cauldron of envy. Which doesn’t mean I’m not sincere. I just want everything that you have.

It’s happened many times before. A friend of mine whose work I admire, whom I feel deeply deserves the success that both of us are desperately seeking, get’s a book published. I’m supportive. So supportive. So happy for them and their success.

All of this is true. I don’t think envy is entirely incompatible with love and support. Not a bit. Resentment, for sure, but not envy. And sure, there are those whose success inspires my resentment. But they tend to be people I don’t like very much. But this is my friend. And even if she or he wasn’t, I would still admire him or her. (And no, of course I’m not talking about you. I’m talking about some other person).

But it wasn’t always such. There we were, in our mutual admiration society of two, telling each other how much we admired one another’s work and how much we each deserved success, and how unjust it was that we hadn’t achieved it, and meaning every word. And then—well. I’m just so happy for you. But it could have happened to me, first. It really could have. But it happened to her or him and she or he deserves it and I refuse, refuse to feel anything but positive thoughts.

I envy successful friends. I envy successful strangers. And then there are those successful strangers whom I feel have slighted me in some way that not even they are likely aware of, and that envy seethes and stews and turns into jealously which turns into resentment that turns into a deep desire for revenge. Revenge in the form of success. They will be vanquished. They will be ground into the dirt by the success that I so rightfully deserve, and I will dance on their battered corpses.

I am positive I’m not alone in this. Because I feel it. I feel it every time I go to one of these conferences/ professional gatherings. You know the conferences and professional gatherings I’m talking about. All that hope. All that envy. All that jealousy. It’s all there under the surface. Writers and artists and wannabe writers and artists all with the same desire. A few are destined to achieve it, but the vast majority aren’t. Competition is stiff. And it’s always: Why not me?

But I don’t want to give you the impression that these professional co-minglings can’t also be deeply enriching. There is support. There is love. There is admiration. There is much to be learned. But there’s no avoiding the unspoken.

I am a poor loser. I have always been a poor loser. Second place or third place or honorable mention in a competition is not enough, and I feel shitty for thinking this way, for the entitlement that I most definitely have no right too. And yes, my ingratitude is unseemly. But dammit it stings.

“Aren’t you going this year?” some friend or professional acquaintance might ask. “We hardly see you anymore.”

And I’ve heard people say, “The only one I’m in competition with is myself,” and, “You can’t measure yourself against other people’s success,” and while those are all nice sentiments, I call bullshit. Maybe when you’re alone in the room and in the zone and just trying to do the best work you can do. But once it’s done, you can’t help measuring it against all the other work you admire. Of course, admiration isn’t envy. Envy is envy.

And I feel that envy. Because I want what you have. Now you may think this is all deeply unhealthy, but I know a lot of artists who thrive on it. Very good ones. They want to be the best, and they envy those they know are better. You could generously call it “a competitive spirit” and competitiveness is definitely a part of it, but for some of us there’s really no avoiding that underlying desire to excel beyond those who have achieved more than us for the very sake of it. To be the best one in the room. And it’s very hard to be the best if you aren’t just a little envious of those who are better.