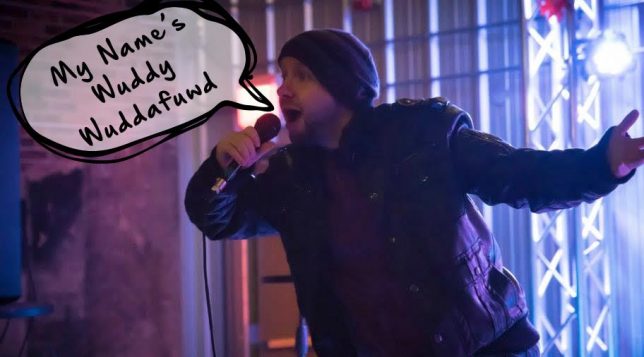 I talked a mile a minute as a kid; the only problem was the untrained ear (everybody but my family—and sometimes my family) had no clue what I was saying. I knew what I was saying so I assumed everyone else did and I had no idea that I couldn’t pronounce about half of the alphabet.

I was put into speech therapy for my first few years of elementary school. Getting pulled out of class for speech therapy is the type of thing that many kids dread due to the fear of being made fun of or bullied, but I had a completely different perspective. When the teacher would try to discreetly call me out of class, I’d excitedly jump up and brag to the other kids that I was getting out of doing math work to go say some words, play some games and get prizes from a the enchanted “treasure chest.”

I felt the entire school laughing at me… and I liked it.

Rs were the hardest thing for me to grasp, which is a pretty cruel fate when your name is Rusty Rutherford. I remember saying the pledge of allegiance over the intercom for the morning announcements one day, and then when they went around the circle for each of us to say our name, I proudly proclaimed, “My name is Wuddy Wuddafuwd.” I felt the entire school laughing at me… and I liked it.

I had a strong support system including my family, teachers, and speech therapist, which I think is what helped me have such a resilient, possibly blind, self-confidence. I loved the feeling I got making other people laugh, and it didn’t really matter if they were laughing with me or at me. I eventually got over my speech impediment, but I didn’t get over my addiction to making people laugh.

I went on to do theater in high school and college, and became semi-obsessed with the stage when I discovered stand-up comedy. There’s something exhilarating and terrifying about being all alone on stage in front of a crowd of people with nothing but a microphone at your disposal.

I was drawn to the idea that simply being funny and making people laugh had the power to completely turn someone’s bad day or bad mood around. As I mentioned, I was blessed with a very caring, supportive family, but I understood at a young age that not everyone was as lucky as me to have that same kind of love in their house. While roaming the halls of the University of New Mexico’s theater department between classes one day, I discovered the opportunity to take my love of performance and the arts and use it to help other people, perhaps people who needed a laugh the most: “at-risk” and gang-involved youth.

I applied and got the job working with Youth Development, Inc.’s Teatro Consejo (theatre of counsel) and Gang Intervention program. In my seven years with the organization, I found that humor became one of the most effective ways to break down some of the hard outer shells that so many of these disenfranchised teenagers came in with.

In 2014 I was selected to give a talk for the TEDxABQ main event about the power of laughter with “at-risk” youth. I hadn’t thought much about the speech therapy days, I was more focus on how I was going to reach out to the 2,000 people in the audience to try to make them laugh and think and feel.

The experience was one of the high points of my life, and it made me want to do more of these types of presentations. I began speaking more and more throughout the city. The performing arts program I was working for with YDI lost its funding and I was laid off when it shut down. I wasn’t ready to give up on the work I was doing there or the population I was working with, so I connected with a friend of mine, Van Overton, who shared the same interests and passion for improving the lives of our city’s young people and we creating Duke City Dream Lab.

Last month, Van and I were asked to present for Kiwanis Club of Albuquerque on the work Duke City Dream Lab is doing. After the presentation, a lady approached me and asked if I went to Sombra del Monte Elementary School. I told her I did and she told me her name was Kim Kerschen, and that she was my speech therapist and she recognized me as soon as I started to talk, even though I didn’t mispronounce quite as many words as I did when she knew me. We chatted for a while, and it made me realize how far I’ve come in speaking since my baffled babble-mouthed days to today, speaking in front of thousands of people each year and them actually understanding what I’m saying.

It’s important for us to realize that whatever struggles or handicaps or impediments we’re going through now, with the right heart and dedication we can overcome any of them and do great things. It’s also important to realize that with a little effort you can completely impact someone’s life who may need that extra help or a little nudge in the right direction.