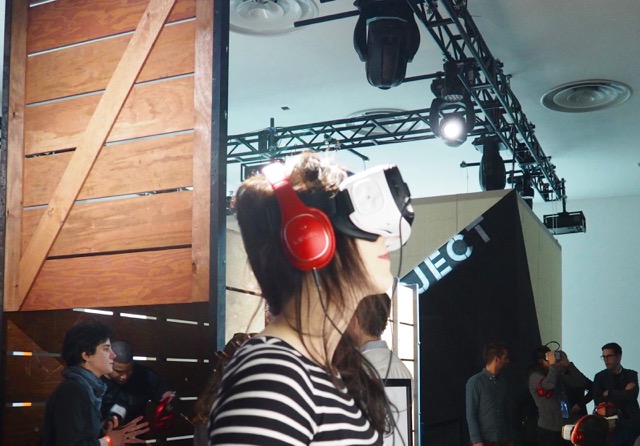 Me at the Tribeca Film Festival’s Storyscapes Program

Sooo… what is this whole Virtual Reality (VR) thing? I mean, most of us have heard news stories about it. Some have even had a chance to try it out. Tribeca Film Festival has embraced it, along with the likes of powerhouses like Google, Facebook and Sony, who all have their fingers in the yummy 10-foot high virtual pie.

VR is now being used for gaming, as a way to tell stories, view movies, train athletes, pilots, doctors, interact with others, design architecture, plan transportation projects, even for therapy. Hopefully, some day, it will be an innovation for schools and education.

What is VR really?

I actually had to retreat to the bathroom after my experience; I was feeling so many emotions.

As a basic definition, Virtual Reality is a computer-simulated environment that a person can explore, interact with and/or manipulate. This environment, or world, can be real or imagined. You often hear terms like Virtual Environment (VE) or Immersive Multimedia; these also refer to what we generally think of as VR and are interchangeable. Augmented Reality (AR) is something slightly different. It is basically a view of the real world, in which elements are enhanced, or changed, by computer-generated sensory elements like sound, video or graphical input. In other words, you could see a simulated apple on your desk in your room.

Today, you generally see people experiencing VR by wearing bulky headsets, often with headphones. In the future, inventors and creators are already dreaming of other, less encumbered ways to step into virtual worlds.

Are we all going to be wandering in a VR world soon?

There is a VERY wide variety of opinions on how much VR will impact the world, how fast this will happen, and what the consequences will be. Two examples:

Philip Rosedale, the man behind the virtual world on our computers (Second Life), is now heading up High Fidelity, a company creating an open-source, multi-user VR platform—which is here and out for beta-testing. Mr. Rosedale claims the impact of VR will be “as significant and disruptive as the internet.” He sees VR emergence as a something that will be the “Final Medium” for humanity. According to him, the first wave is “Immersion.” This entails the ability to have hand controllers that allow us to sculpt, make and design in 3D, along with screens being shareable. This will be possible and useable in six months to a year.

The next is “People,” interacting face to face, having normal interactions in a VR world. This is being worked on, and will become better and better. The third wave is “Place,” simulating full worlds and spaces we can all participate in. Mr. Rosedale believes we have the possibility to live in an entirely new “world” that we can affect and create, with no limits.

Derek Belch, the CEO of StriVR Labs, takes a much more measured approach to VR. StriVR has created the first useable, effective VR sports training environments. In a world where sports is big business, but there are strict rules around training times, StriVR now has six NFL and 12 collegiate football teams using their VR, recently expanding into the professional basketball and hockey arenas. Mr. Belch says we need to look at “how many use cases” there are today in reality, and there are only so many “scalable” opportunities right now. He claims we need to get the costs down first before it will turn into a widely useable product for different industries. Though, once we do, he also is optimistic about the viability and application.

What does VR mean for creative endeavors?

Everything. As the technology grows, so will the possibility for use. VR gives artists an unprecedented new medium to explore how we can tell stories, have audiences interact with them, change perspectives. Recently at Tribeca, not only were there films created in a virtual reality environment, but there were also journalistic endeavors, graphic novels, made up worlds to explore. Artists are starting to embrace the form in a wide range of possibilities, and in a beautiful Artsy Editorial, Molly Gottschalk claims that it is the most powerful medium of our time.

The greatest virtue of VR, I believe, is allowing an audience to truly see things that they would not normally be exposed to. It is almost a forced perspective, using all of your senses to create something that truly envelops you. Because you must interact with it, this medium forces you to pay attention.

For instance, I had read a wide variety of articles on the issue of solitary confinement in prison systems; though, it was only when I was sitting in an actual solitary confinement cell in 6×9: An Immersive Experience of Solitary Confinement that I truly realized the tortures so many people are forced to experience. With sounds recorded from a prison surrounding me, and stories filling my ear every time I looked at one of the very few objects in the room, I actually had to close my eyes at one point. Whether it was due to the shift in perspective or the content, I don’t know, but I do know I thought I was going to pass out. I actually had to retreat to the bathroom after my experience; I was feeling so many emotions.

Even after 10 minutes in that virtual place, it was hard to immediately face the busy outside world. 6×9 was created by Francesca Panetta and Lindsey Mill from The Guardian, highlighting the use of VR by journalists. Others at The New York Times and the United Nations, to name a few, have also recently created poignant, investigative VR experiences.

Of course, Virtual Reality is still an artistic frequency on the cusp of our sensibilities—which means it is neither easy nor for the fainthearted. There are restrictions and downsides. You have to have a decent amount of technical know-how (or work with those that do!) to be able to embrace this new trend of expressing yourself. We also aren’t yet aware of most of the hazards of usage. However, as with any new technological advancement in the course of our history, VR is very, very exciting. I expect artists of all kinds to be right there at the forefront of exploration, as you usually are.