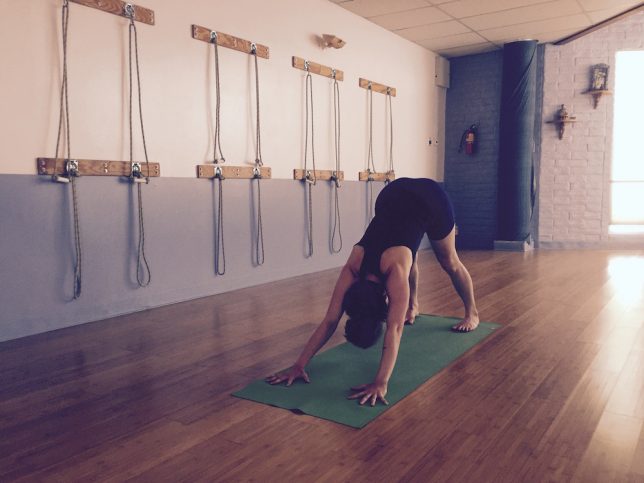 Here I am, having written oh so many posts for Pyragraph on music, and now I get to talk about teaching yoga, too! How exciting!

I’ve been teaching a yoga class for kids for a while and it was really a blast to teach grownups for the first time. They listen! They are quiet (sometimes eerily so)! They do what you tell them to do! (Whoa.)

Already, I feel like I’ve already learned some yoga teacher tricks. For example, I sent the class into downward dog in between poses so that I could snatch a sip of water or a look at my cell phone (where I had this photo of the sequence I made set as my lock screen, shh!).

But on to highlighting the poses, and how I felt about teaching them. 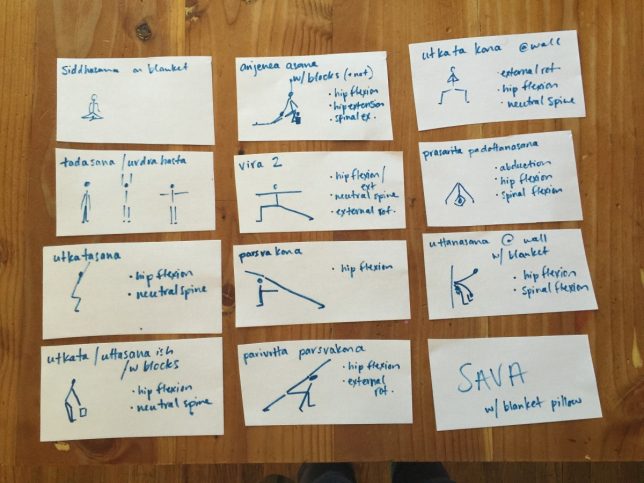 Use notecards to create your sequence! #protip #jk #amateurtip #pleaseforgivethespellingerrors

I actually used virasana instead of siddhasana as the first pose. I instructed people to go directly into the pose, prop free, if they felt comfortable, but gave permission to use props by spreading a folded blanket over my (very thin) mat, sitting on a block, and putting a rolled blanket under my knees. Then I asked people to close their eyes and I talked about some special actions to think about in the pose, and breath awareness.

With this fourth pose in the series—the utkatasana/uttasana-ish pose—I came up against something that I think will serve me well in the future: start off small, then work up to a more complicated pose as I watch the students and meet them where they’re at.

I gave people instructions to support each hand with a tall block, but this wasn’t enough height for each student. One student in particular needed more height under the hands—there was too much thorasic and lumbar kyphosis happening—and I felt weird about singling this person out, but did anyway. I got a chair and took it over (as the entire class watched my every move in between poses). This student seemed to handle it just fine but I still felt strange about correcting in that way.

Of course I’m there to assist people in learning yoga poses, but there’s got to be a gentle way of teaching that somehow doesn’t get the idea across that a particular person is bad or their body is inadequate or they’re doing something wrong.

Vira II felt like the hardest part to instruct. I found that it took way longer to explain how to get into the pose than it seemed like it should. I know how this pose feels in my body, but instructing people into and out of the pose proved to be way more cumbersome than I was ready for. I’ll need to listen extra carefully next time my teachers instruct Vira II in class.

Ah, languaging! So crucial to give precise, specific instructions. It’s easy to get tripped up.

Plus, for this pose I have no idea which way to face or which direction to have the students face. I definitely feel like this seems more complex than it actually is.

I gave more than 10 minutes for savasana. With only an hour-long class, this felt almost like heading out early as the teacher. My mind started racing as people settled in—was this just too freaking long to leave people lying around? Am I not supposed to be doing something the whole time? Am I supposed to talk the whole time? What should I say? Do I have anything more that’s valuable to say?

I said some stuff about relaxing various muscles/regions of the body, and then shut up. And then sat for 10 minutes as the energy in the room settled in. It was really nice to be on the facilitating end of savasana for the first time and watch people let go. And to let go, to a certain degree, myself. I waited. I checked the clock a few times. I remembered that my teacher had told me it takes five minutes to really arrive in savasana, and that felt reassuring. Like a 10-minute savasana wasn’t so long after all.

And then class was over! It was so much fun and I can’t wait to do it again.