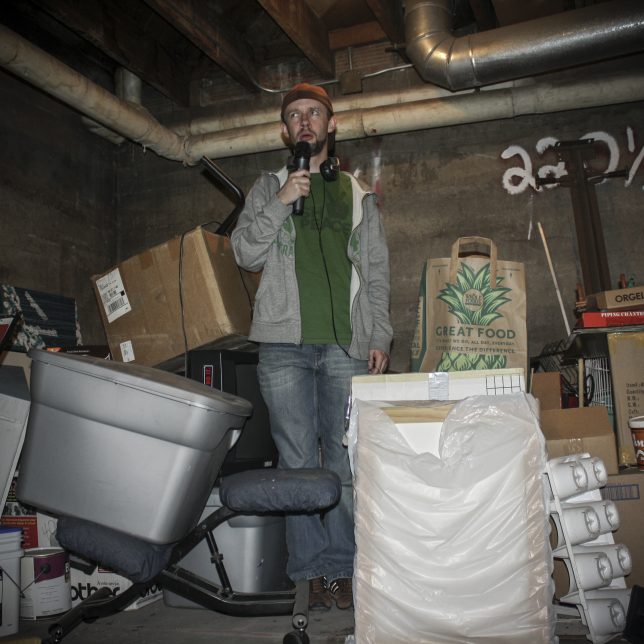 I crouched in the dark, dusty balcony in the back of the venue, waiting for my entrance music to hit so I could burst out unexpectedly from the back of the room to the shock and awe of the screaming crowd that surely would be on the edge of their seats waiting for me down below. Only I had no idea what the audience consisted of until the show had started, and it turns out Sunday at 10am isn’t prime time for a comedy show in Canada.

I was a young, bright-eyed 19-year-old ready to take my comedy out of the country for the first time to the Montreal Fringe Festival. Fringe Festivals are unjuried, lottery-style theater festivals where the artists pay an entry fee, and if selected, they receive a certain number of shows within the two weeks or so that the festival runs.

I’d convince them to sensually pull a flyer off my body.

I had picked the brains of Mark Chavez and Shenoah Allen, a comedy duo known as the Pajama Men whom I really looked up to and who are veterans of the fringe circuit. At the time, this was their main source of income, and the idea that I could actually make money while making Canadians laugh was intriguing to say the least.

If accepted into the fest, artists would pay their entry fee, around $800, pay for their plane tickets, around $2,000, and then the festival would find people in the city willing to let them sleep on their floor for two weeks. In return, you set your own ticket prices to your shows, and in most of the Canadian festivals you keep 100% of your ticket sells.

I was taking my one-man-show, “How To Pick Up Chicks.” It was just my friend and tech guy Bruce Wong going with me, so I figured if we could come close to selling out every show at our 100-seat venue, we’d make a little money and have a fun trip. The festival tries to give each performing company a variety of good and bad time slots to keep things fair, and I found out some time slots are harder to get a crowd for than others…specifically the Sunday 10am slot.

Another trademark of the Fringe is that most of the promotion for the individual shows comes from the artists themselves. We were competing with about 100 other theater companies that were there from around the world, many of which were much more well known and experienced than we were, so I figured the best way to promote was to be creative…maybe weird is a better word. At one point I walked the streets wearing dozens of my show flyers taped to my body in lieu of a shirt, then I’d walk up to guys’ girlfriends and flirt with them and convince them to sensually pull a flyer off my body. 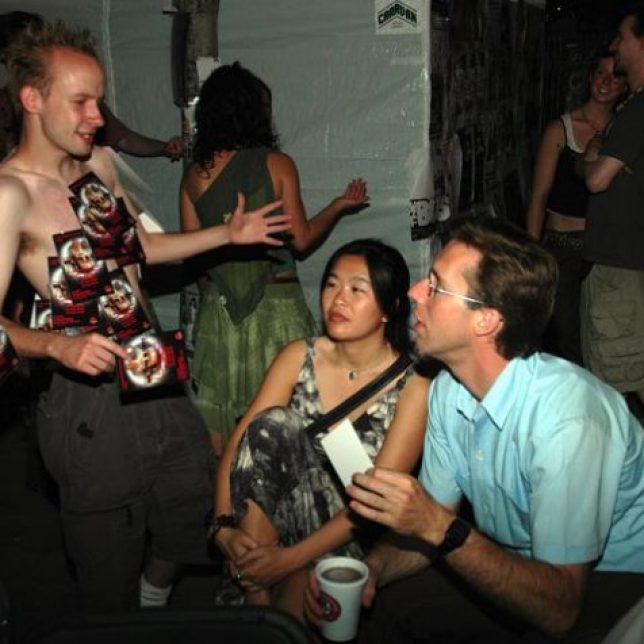 I’m not sure if this converted to people coming to my show, but it was fun. They also offered performers 15-minute spots on the street stages during the big street fest that was going on. Bruce and I had our spot secured, where I initially planned to do a bit from my show, but after watching some of the other acts I realized that most the public would just pass by and watch whatever happened to be going on on stage for a minute or two, then be on their way.

Once again, I decided weird would be the way to go.

I somehow convinced my modest Asian friend to sport a flowing brown wig, messy red lipstick, and a pregnant pillow-stuffed belly and stand on the stage for about 10 minutes holding a sign that said “How To Pick Up Chicks.” People walked by and looked at him awkwardly. At about the 10-minute point, Bruce started breathing heavily and having contractions. More people began to gather to see what the hell was going on. When enough eyes were on Bruce, his water broke, covering the stage and part of the onlookers in a wet mess.

That’s when I made my breakthrough, breaking through Bruce’s legs sporting nothing but an adult diaper that I had purchased earlier that day from a thrift store. Bruce’s childbearing moans were drowned out by my newborn shrills as I spewed water into the air. The people crowded around had no idea they would be witnessing an adult birth that day. I pulled myself up and jumped off the stage, literally sending a few people running away. The faster they ran, the faster I chased them, my arm outstretched forcing them to take a flyer. After all this advertising, I was sure we’d have a line stretching around the building for the rest of our shows. We didn’t. Especially not that Sunday. 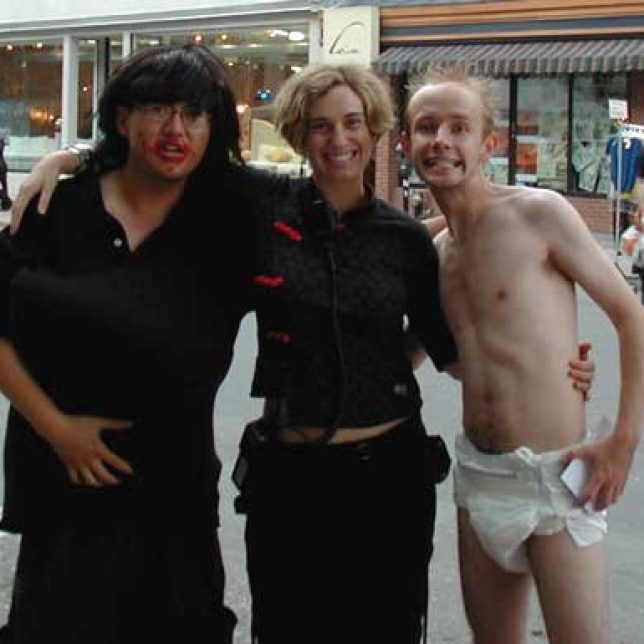 That morning was my last show in Canada. I sat on that dark balcony hoping to leave The City of Saints with one last bang before I flew back to reality. I grew up addicted to pro-wrestling, so I had a pro-wrestling style intro where I would come out to Sexy Boy as homage to my biggest WWE influence, The Heartbreak Kid, Shawn Michaels.

I always try to give my all for my audience, whether it’s an audience of 2,000 or one.

I’d erupt from the balcony, haloed in a spotlight and work my way through the audience to the stage, serenading the girls in the crowd as I sang, “I’m just your sexy boy….” Only there were no girls in the audience that day, only guys. Only one guy actually. So I worked my way to the stage singing, realizing that it was going to be just him and me for the next hour.

What made this party of two even more difficult is that my show was built completely around audience participating. I had several bits where I would pick someone from the crowd and bring them on stage to help me. Luckily this guy was in good spirits, because I brought him on stage…a lot. Many of the pieces were written specifically for me to bring a girl on stage, so I turned to the bartender. She was cute and played along.

Since I couldn’t feed off the energy of the crowd like I like to, I had to muster up the energy myself by going deliriously overboard on stage. At one point I traded the bartender a colorful ribbon I had just pulled out of my zipper for a beer. It was the first time I would drink onstage.

After the eternal hour up there, the lights went down and at least one person applauded. I chatted with the lone audience member and the bartender after the show and they both said they had a good time. Bruce and I split our ticket sales that day, so we each made $4. It was a tough reality check, but also somewhat freeing because I knew I would never have to perform for fewer people than I did that morning. I also decided that day that I would always try to give my all for my audience, whether it’s an audience of 2,000 or one.

When all was said and done, Bruce and I lost money on our tour, but we got a discounted vacation, met a ton of cool people from around the globe, and learned a lot about ourselves. I would highly recommend Fringe Festivals to other performers, and there’s definitely potential to make some money, but when I go back I’ll be thinking of it as a vacation and an opportunity to introduce my twisted humor to new people from faraway lands, and perhaps chase some people around in a diaper in the process. 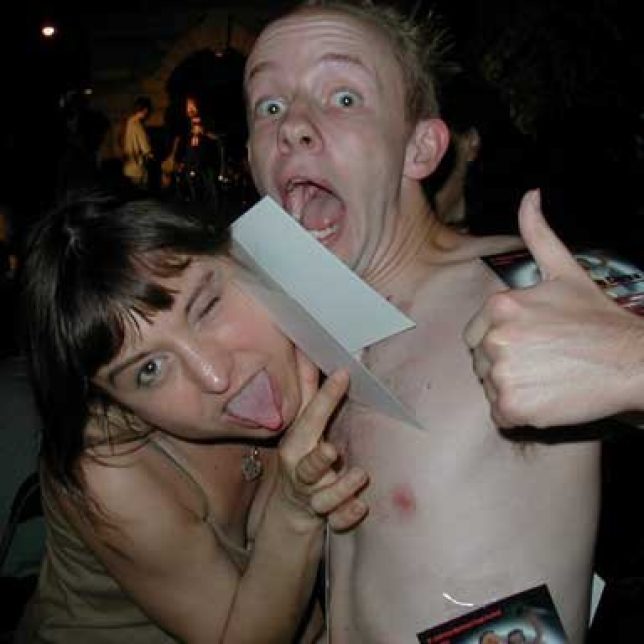