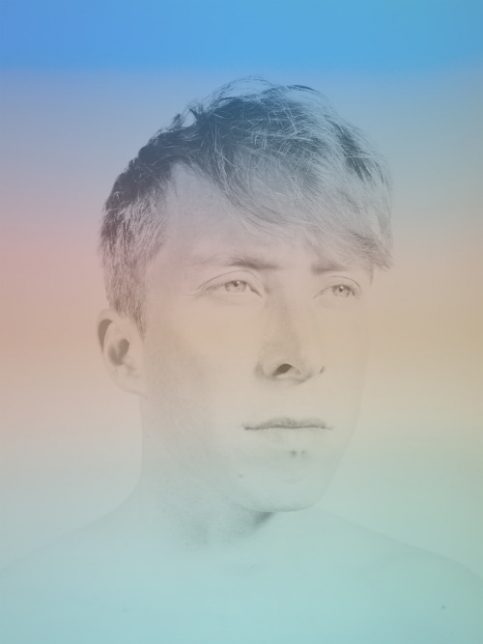 From the series “Painting a Portrait” by Delaney Allen, on view in “Future Tense” at 516 ARTS.

Guest Blogger Stefan Jennings Batista, an MFA Candidate and Instructor of Photography at The University of New Mexico, is the co-curator of “Future Tense” exhibition at 516 ARTS, exploring the socially, politically and psychologically complex relationship we have with the places we inhabit.

Delaney Allen is a Portland-based visual artist working primarily in photographic media and is one of the artists featured in the exhibition “Future Tense” exhibition at 516 ARTS June 18-September 17 for PhotoSummer.

As one of the co-curators for the upcoming photographic exhibition “Future Tense” presented at The University of New Mexico Art Museum and CENTER at 516 ARTS, I had the privilege of asking Delaney Allen some questions about his work and practice:

Stefan Jennings Batista: One of the hardest questions I’ve been asked as an artist was to describe what I my work is about in one sentence…. Could you distill your photographic practice down to one sentence like that?

Delaney Allen: An attempt to portray life mixing a myriad of photography representing symbolism and mood in an autobiographical nature? That’s tough. I always feel my work needs a bit of explaining.

So as a photography grad student at UNM here in Albuquerque, I seem to make a lot of work about my home in Coastal Florida, and the change of my environment from beach to desert. You are from Texas originally but relocated to the Pacific Northwest for your MFA. How did that change affect your photographic work? It seems your environment makes it into your images quite a bit.

It spurred something in me to take something personal and present it in a poetic nature.

Before grad school I really wasn’t making work. I had dabbled in photography in undergrad and spent a few years after working various jobs. Grad school and the relocation, more specifically, played a part in my photography interests and shaped the way I work now. As a challenge to myself as an artist, I decided to take on landscape photography while starting my second year in school. Prior, I had never shot anything outside of a studio. The sense of exploration I’ve always had and the new landscapes of the Pacific Northwest guided the way early on. After time, I was able to see the environment here in a slightly different way that has carried on in my approach to the subject.

I had a professor once at UNM that encouraged/heckled us photo people to make rules for ourselves, to set parameters in order to help shape our work. Do you have routines, patterns or rules that guide your practice?

I have routines but I’m not sure I have patterns. It almost feels like waves to me. I’ll build up before really approaching a new series. Time is spent out on the road shooting and once a theme is confirmed I’ll hone in on what else I need from the landscape aspect. Then I move into the studio to create still-life images that could be blended into the series. That too, is when I may approach self-portraiture in the same vein. After that it’s time spent editing and printing. After that work comes out it is time to start that process all over again.

I purposely do not set rules in hopes that in each new body of work I can experiment with something new. That’s purposeful in the hopes of never becoming stale with my approach. I want those challenges of working through new techniques.

It seems you are as much an image maker as you are an image taker. Your work is pretty diverse. In both your series “Getting Lost” and “Painting a Portrait” for example, you present a range of photographs from quiet snapshots of nature to elaborately constructed still life dioramas with layers of color, pattern an illusion. Where does all of this come together for you? Where is the intersection?

I feel the intersection is in the narrative. The construction of the edit may be challenging upon the first take in fully understanding the work, but given time I feel a mood can come from the read. I’ve built that photographic language over time in hopes of not presenting what I would call a “straight” photo series and have deliberately included the imagery that may pull from symbolism during instances to help define a mood. Maybe the intersection is in that mood that is set as the underlying feel to the work?

One of our aims with the “Future Tense” exhibition at 516 ARTS was to highlight how photography is mirroring this sort of shift in social culture both at a personal and global scale. We felt the image of your cell phone screen showing your question to Siri as to why you were lonely was a powerfully clear vision of this shift… of how the status of social interaction and the human condition today are being affected by things like technology. Can you talk about how your work is influenced by contemporary issues like this? 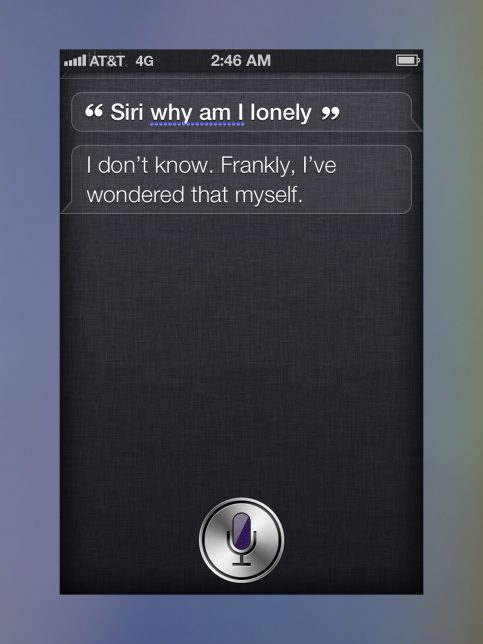 That image, and more specifically the series as a whole (“Painting a Portrait”), although not based on these ideas you mentioned, was derived from these issues involving that interaction. Although not fully apparent in the work, I saw on a personal level this interaction while dealing with issues of loneliness. At that time, while shooting on the road, a lot of my interaction wouldn’t come from human contact. I was limited to a few texts with friends and my interactions with Facebook. Included in that series is a text mentioning my day-to-day life during that series. It includes, now looking back on it, what would be an obsession with this need to interact through social media for connection. But that was really it for me–interacting with my phone for company rather than any other connection.

The Siri photo happened out of curiosity more than anything. Late one night I asked and was surprised to get that as a response. I had never talked to Siri before and still don’t since she responded with that.

Much of your work seems to chronicle your journey. How has your journey and search shaped what you make? Is your work catharsis in a way?

My first series, “Between Here And There,” became the basis for how I make work. As that was finished during grad school, I decided to turn my personal life into art. While finishing school, I had a breakup that occurred. That spurred something in me to take something personal and present it in a poetic nature. The emails within the series present a narrative while allowing the images to almost act as illustrations. It was my first attempt at transparency and from that moment on I’ve been drawn to such work.

Yeah, I see the work being therapeutic. These instances of transparency leading to the personal narratives are tough to face but ultimately allow for more understanding of the moments at hand. I’m guilty of spending time overanalyzing the issues but in doing so I feel it shapes the work. It’s hard to look at your issues and then present said issues to the world. But with that intensity surrounding the analyzing and making it allows me to move on from each moment or subject.

Where do you see your work going in the near future? What are you working on currently? Is there anything us cravers of visual candy have to look forward to from you anytime soon?

I recently just finished a new series titled “ARTIFACT” that pulls from the ideas of art history and ultimately has me creating my own history. The last few years of life have been a bit of a strain so with that I wanted a body of work that only looked at myself and would give me a nice challenge. This work places myself in various environments both through the physical nature of traveling there as well as using aspects of green-screen technology. It also challenged me, as a maker, to attempt at making physical objects, either through painting or sculpture, to complement the series. Outside of this new work, I’m not really sure. I’ll take a break for a second before heading back on the road. Next up might be a look at the cycle of life through the eyes of the sunrise and sunset.

“Future Tense” is co-curated by Stefan Jennings Batista, an MFA Candidate and Instructor of Photography at The University of New Mexico, and Traci Quinn, Curator of Education & Public Programs at The University of New Mexico Art Museum. It is on view at 516 ARTS, 516 Central Ave. SW in Downtown Albuquerque June 18 – September 17, 2016. The opening reception is Saturday, June 18, 6-8pm.

PhotoSummer, now in its second year, is a collaborative initiative that represents and promotes historical and contemporary photography in New Mexico. PhotoSummer 2016 features 250 artists at over 20 venues in both Albuquerque and Santa Fe. Local, national and international photographers, scholars, publishers and more are participating in exhibitions, workshops, lectures, pop-up events, networking opportunities and more! PhotoSummer 2016 is organized by lead presented The University of New Mexico Art Museum and516 ARTS in Albuquerque and CENTER in Santa Fe.