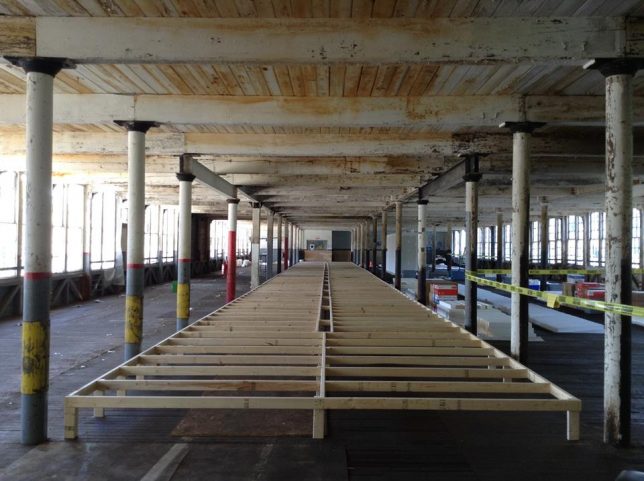 T-Minus 7! This post is part of an 18-post countdown to Amy Stacey Curtis’ next and final solo biennial in Maine mill space. After MEMORY, her upcoming biennial, she will have completed nine solo biennials over 18 years, with 81 massive interactive works, all told. She’s been unloading her process on Pyragraph as we countdown to MEMORY. Read the series here.

Mike the Builder (Mike Feliccitti) is my chief carpenter. He’s been building for me the underlying structures (walls, pedestals, platforms, halls, rooms, etc.) for my solo biennials since my sixth biennial (TIME, 2010).

Mike erects the wood in the mills I clean and clear for these big exhibits—lots of wood—so that the drywalling or plywooding, then the painting it white, then the placement of my thousands of things, can be done. One of the understructures he built for my eighth solo biennial (MATTER, 2014), was the largest not-a-house thing Mike had ever built (pictured above; 146 feet long).

Any day Mike’s at the mill, his joy toward what he does lifts me even higher than I already feel installing my works. (Making my concepts physical is my favorite part of my 22-month process).

He just said there’s no way he could do it all. “It’s just too big this time.”

Mike enjoys what he does so much, he often pitches-in on top of his chief carpenter duties as an art assistant, helping me move into the mill, helping with the harder-to-reach drywalling, helping with the rigorous take-down and the messy demolition at the end of each exhibit.

Everything that goes up must come down.

Bill used to build the much-less-of-these-types-of-things things at my biennials, until my work got much more ambitious, and there was no possible way for him to do it alone. Neither Bill nor I are carpenters; each of us does the best we can.

Bill still builds. For example, strengthening the mills’ floors, installing handrails, fortifying columns, repairing floor boards. The carpentry I do, aside from drywalling (which I learned to do for my biennials watching You Tube, not as gracefully nor quickly), is the light stuff—building half-walls, gates, and patching floors.

I have Mike build using 2x3s as much as possible (as opposed to 2x4s; I use 2x4s for pieces like the one above, because participants are walking on top of the piece). My installations exist only a short while (my ninth solo biennial, MEMORY, is open for participation only six weeks), and I want to use as little wood as possible. Any wood I can’t recycle into other works, future mill fixes, or other structural needs at our home in Lyman, Maine, gets burned in our fire pit.

While many people I’ve hired to help me see my installations through are condescending, look at me funny, or think I’m nuts (“You want to build what now?”), Mike is never daunted by the major things I ask him to construct. Or at least he doesn’t seem to be, or say he is.

Nor did he twitch when I asked him to build the structure for a 120-foot pedestal, then to build a second one.

Nor did he cringe when I asked him to build the biggest not-a-house thing.

Mike didn’t blink, when I told him all the things to be built for MEMORY. He just said there’s no way he could do it all. “It’s just too big this time.” So now I have Caleb the Carpenter too.

Mike’s work ethic, attention to detail, and ability to make something straight in an un-straight mill, is uncanny. He’s both an artist, and I think, some kind of superhero. I can almost see his cape, flying behind him. Now Caleb has a cape too.