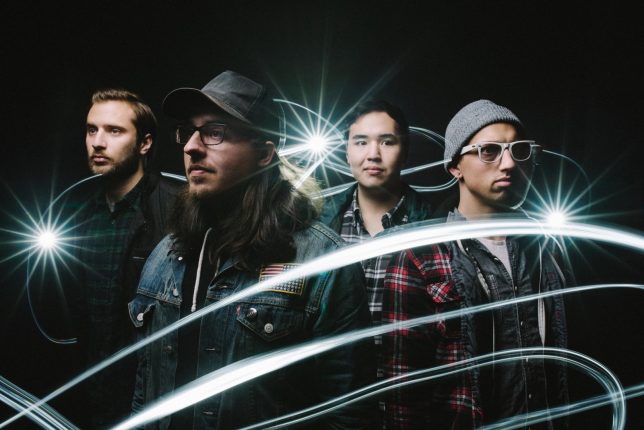 Photo courtesy of Lo’ There.

I’m collecting stories from independent musicians about the strange experiences they’ve had on the road. Some are sketchy. Some are spooky. Some are gross. Some I just don’t even know what to do with. People are weird, man. That said, enjoy this second installment of Sketchy Tour Tales. See the first installment here.

Lo’ There is a shoegazey post metal band from Tacoma, WA, that has been around for about five years (which feels like a lifetime). They’re a popular and respected band in the Northwest music scene, having shared the stage with Between the Buried and Me, Title Fight, From Indian Lakes, and even a tour with The Sheds. In this piece, good friend and former bass player Ahren Lansford looks back on their first tour and a string of unfortunate circumstances that have lodged it in his memory forever.

Three or four years ago Lo’ There decided to hit the road for our first tour. We had to borrow our roommates’ tour van. It was an early ’90s dodge van that needed some real work on the transmission, etc., but we went anyway. The tour consisted of a week of dates from Oregon to Northern California then over to Reno, NV. Everything started off very smoothly until we hit southern Oregon; the transmission decided to die while we were going over the mountain pass before Mt. Shasta.

It looked like someone had stolen his car and after him catching them in the act, they took off with it.

We got stranded in the middle of the summit of this mountain in the middle of the night at a rest stop. Luckily our frontman had AAA and was able to secure a tow for the van. While we waited we hung out with a homeless guy and his dog and chatted away and found whatever we could to entertain ourselves. Finally the tow showed up and threw our one-ton van on the back of its flatbed with all of our gear in the back. All five of us crammed in the front cab of the tow, and we traveled 50 miles to the nearest city of Ashland, OR.

There we waited for three days or so, sleeping one night in a motel next to the car shop and then the rest of the days sleeping in the van while it was still sitting on the lift. A magic $1,500 later we finally made it back on the road having to drop two dates in California. But we decide to keep trekking on to Reno where we play at Fort Ryland (a punk DIY house show spot that’s been around forever).

Being in Reno for the first time we experienced the casino atmosphere. Walking down the main strip, we saw some guy yelling out a bunch of curse words and chasing after this car for a large length of the strip. It looked like someone had stolen his car and after him catching them in the act, they took off with it. As he got close to the car they would let him catch up and then take off. It was a pretty random sight, for sure.

After this, fortunately, things stopped being so strange and unlucky. We headed back to Fort Ryland and met the band Drag Me Under for the first time. They helped us get on another show in Lake Tahoe at a place called Whiskey Dicks with the bands Silver Snakes and Aeges. We showed up to that promoters’ house in the woods near the lake and immediately got a taste of Tahoe hospitality. The big bearded dude hooked us up with the best vegan chili ever and lots of tasty beers and we all hung out until the show started.

When we got to the venue/bar it became real apparent this place knew how to party. Random people were buying us drinks and playing to a loud sound system and we had a great time. The last band closed the night out with a drunk patron taunting and throwing beer at them, so that was lame, but overall it was a great night. After hanging in Reno drinking coffee and connecting we headed home and finished the tour.

Even though it technically was a bad experience it turned into a good one in the end, and overall that’s what makes tours great. It’s an adventure.

A personal note: Almost every tour I’ve done has involved overnight driving, but I don’t recommend it. Beware of the dangers involved and if you’re going to, make sure you’re prepared with coffee and a lot of sleep saved up.

There you have it. Early tours are as much about the experience as they are about exposure. Everyone has their share of sketchy tour experiences, but that’s what makes it such a blast! Get in the van and make it happen.

Do you have any sketchy tour stories you’d like to tell? Let me know in the comments.