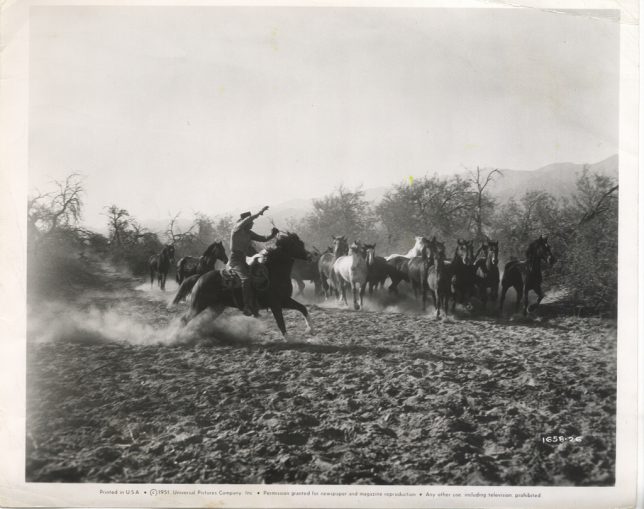 I’m standing in the street as the sun goes down behind me, wearing a cowboy hat that doesn’t fit and clothes that are thick and itchy as hell. The pocket watch I admire is important to my situation, it’s the reason I’m about to die. The big man standing beside me, smiling pleasantly, enjoying his work, has my gun ready. He’s checked it many times to make sure it won’t kill anyone. Taped beneath my shirt are wires and explosives. Soon this little contraption will explode, flinging blood into the breezy New Mexico air and making my ears ring for a day. Wild Bill Hickok waits patiently at the other end of the street to kill me. The director frets the dying sun. The cameraman reminds him, we’re losing the light. It would be good not to fuck this up, I think.

There’s millions of dollars on the line here. Do your job and stay out of the way.

In the last few years I’ve been lucky enough to get cast in a handful of productions shooting in and around Albuquerque. It’s a kick to be part of the process and months later have friends say they saw you on the History Channel at three in the morning, sitting alone in their underwear, unable to sleep, stressed about the job, wife, etc., contemplating suicide, bathed in the pale light of the television screen. Somehow my appearance on TV, wearing western duds and trading lead with Wild Bill, snapped them back to reality and reminded them things weren’t so bad. Who says art has no benefits?

I’ve searched for singular experiences, odd circumstance, and strange characters, and as I squint against the sunlight, at my vengeful adversary at the other end of Main Street, it occurs to me how crazy this Hollywood dream machine can be. Thirty years ago I was playing western gunfight or cops and robbers, or some other variation, with brothers and friends and now I’m doing it for work. And yeah, I’m just a grain in the sack of rice that is film and television production but I’m still right there, earning my cash and acting professional.

Professional has meant a couple different things. No one has come right out and said this, but it’s just some things I’ve picked up.

1. Be where you’re supposed to be.

Depending on the budget of the production, this usually means the little trailer room they give you to change into costume, equipped with foot-operated toilet and bench/bed thing good for napping. If you’re working on a cheapie, hopefully it’s just a spot in the shade.

That’s pretty much self-explanatory. I remember an Alfred Hitchcock quote about him calling actors cattle. Yeah, pretty much my experience. “Stand here, move there, but not that much, now move your right foot two feet to the left and your left shoulder down two inches…there, perfect. Let’s shoot this fucker!”

Everybody is busy. They’re all doing a thousand things. They’re all so stressed. I have to repress my childish curiosity to ask questions about every single thing happening on set and just sit back and watch the incessant, seemingly chaotic activity, because these people are working. It’s not a community college class. There’s millions of dollars on the line here. Do your job and stay out of the way.

My lines came out right. My chest exploded, gushing blood, and I fell to my knees in the dust, dying just like when I was a kid. Then I got to leave. Everybody else had to work until the daylight ran out.