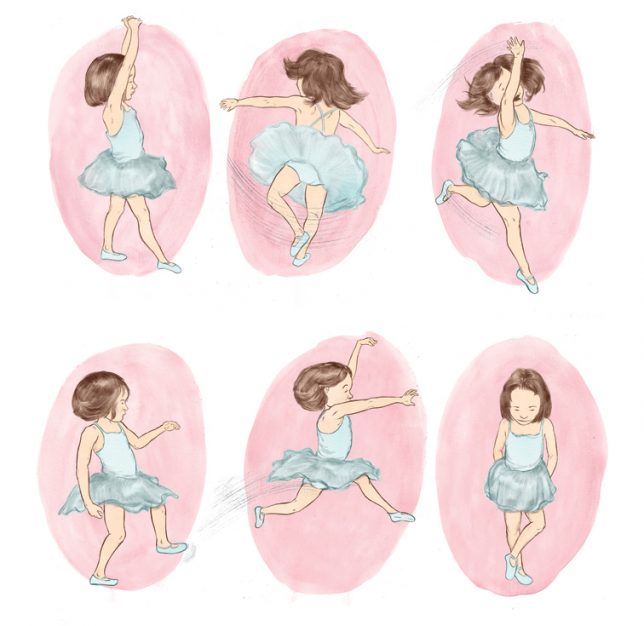 Something that’s always fascinated me about my favorite illustrations is the illusion of movement. The suggestion of an action yet to be completed, that sense that the image is only a part of an ongoing story. Once something is in motion, the borders of the image can no longer contain it. But how do you make that movement in a still image look convincing?

My first illustration for the children’s magazine Cricket was for a story called “Eagle’s Trial” by Gillian Richardson. One of the images required an eagle in flight. In this case a detail I noticed in a photo suggested a key aspect of the mechanics of the wing’s movement. The edge of the wing, while in flight, revealed a wave shape. After watching some YouTube videos of birds in flight, I learned that wings don’t flap. They undulate, curving around the current and snapping upward with each stroke. This informed the finished drawing, giving it both an element of realism, and a more convincing sense of movement. 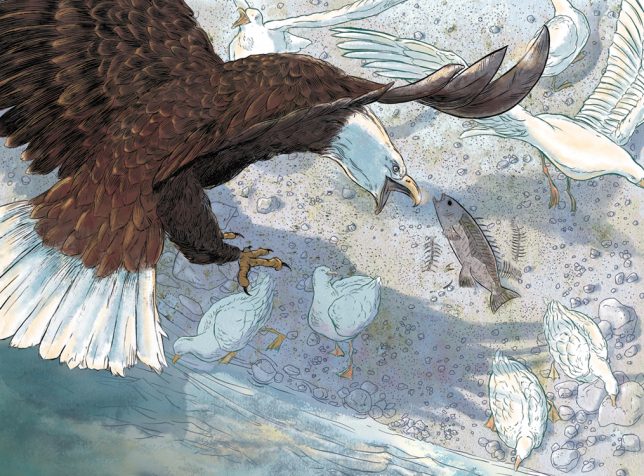 I find that when drawing animals and people, it’s valuable to see what they look like in motion. You can glean some of this from still photographs. Muybridge‘s classic studies of figures and animals in motion is one great resource (easily found on Google). But an even greater resource is video. Youtube has a wealth of nature documentaries where you can watch animals in nature from all angles. While I don’t draw directly from the images I find, I often use screen caps to inform the finished drawing. And while I sometimes use photos of friends, or pose for my own reference using a tripod and timer, they’re still static poses, and there’s nothing quite like watching a figure in motion.

There’s also a lot to be learned from good quality animation. Animation, when done with naturalism and subtlety can be an amazing learning tool, and Disney featured some of the best. I consider the ’60s to be the height of Disney character animation. What followed doesn’t compare, and borrows much from that era. One of my favorite animators is Milt Kahl. Take a good look at Shere Khan, the famous tiger from The Jungle Book. The subtle movement of the shoulders. The sense of weight. No still image can capture that, even in the best wildlife paintings. Kahl was a master observer of nature. The expressionism in animation enhances and reveals the character of the animal, even if it is, to some degree, anthropomorphized. But this is the true art of the medium. That studied and expressive observation of movement, the nuance of a gesture. No matter how stylized your rendering, these little touches of naturalism make all the difference, and if you want to portray movement in illustration, studying great animation can be as valuable as studying a great painting.

For my book, (Mostly) Wordless, I used photos of my neighbor’s little girl. I took a series of photos of her playing with her friends. From this, I discovered the unique way that children move, as opposed to adults. They not only behave more playfully and with a freedom that you don’t often see in adults, but they have lower centers of gravity and shorter limbs, and are much lighter. Bigger people have more weight on their limbs when their bodies are at rest, while a child’s limbs have more pronounced curves that bow out more. Their bodies are more springy. This is probably why a lot of the best gymnasts tend to be shorter.

In animation there is a concept called “pose to pose.” It’s describes where each pose ends and begins through the course of an action. Where the motion rests. So in a static image, if you want to imply motion, you can draw the action between poses. This way you imply where the action will rest, without portraying the resting pose. So if a character is throwing a ball, rather than show the pose before the ball is thrown, or after the character has completed the arc of the motion, you show it in the middle of the arc, the middle point of the action.

When I do use “pose to pose” to imply action, I sometimes show multiple figures on the page. This is one of my favorite techniques, one I borrowed from Hilary Knight, the illustrator of the Eloise books. By showing multiple figures of the same character in sequential action on the page, the reader supplies the closure between the figures.

But sometimes I simply want the characters to be at rest, and quiet moments are important too. But too often I see illustrations where the characters, rather than at rest, look as if they’re frozen in a living tableau, mugging or posing for the camera. And rather than the illusion of life, there’s the suggestion that, once the picture is captured, the figures will break their poses and walk off stage. But in the best illustrations, there is a world outside the border, and if you add motion to your images, there is a greater sense that your characters are able to enter that world.