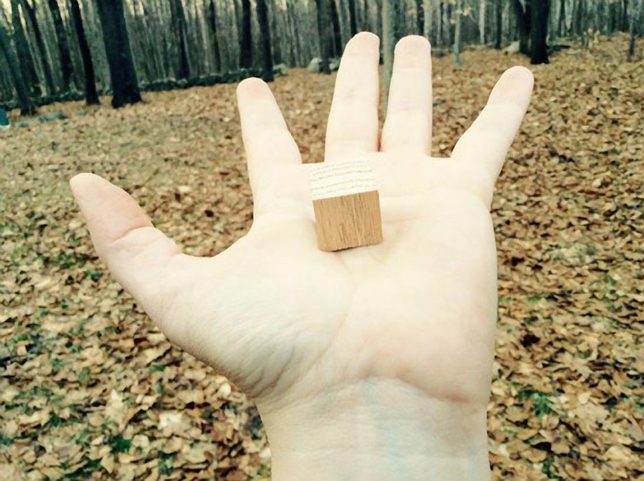 T-Minus 5! This post is part of an 18-post countdown to Amy Stacey Curtis’ next and final solo biennial in Maine mill space. After MEMORY, her upcoming biennial, she will have completed nine solo biennials over 18 years, with 81 massive interactive works, all told. She’s been unloading her process on Pyragraph as we countdown to MEMORY. Read the series here.

Twenty-two months is usually just enough time to mount a solo biennial. So when it comes to these big installations, less is more.

I try to minimize steps, to move with the smallest range of motion, to smaller-ize tasks. It’s like micro-choreography.

To make “x,” I do “a” through “w” thousands of times, each time as small or in as short a distance, or in the quickest amount of time, as possible.

While carrying and scrubbing and installing and sanding and painting, I figure out ways to do these things even smaller, shorter and quicker.

My process had been spread to three floors, 27,500 square feet—three huge spaces, instead of one huge space. So whenever I needed a specific tool (if I didn’t have it with me), or I needed the restroom, or a big sandwich, I might walk 15 minutes to retrieve it. I think these 5-, 10-, 15-minute, not-so-quick amounts of time, added up over my 10-week install.

No one seemed to mind—when they arrived to be the first participants of my exhibit—that I was still making my work. They seemed to enjoy watching me install, using the teensie-est movements possible, waiting a little while before they became a big part of my work.

When my solo biennials are done, I will make my life smaller. Less intense. Slower. Eliminate. Do only what I love most. Somehow, I think my life will be bigger as a result. Because less is more.