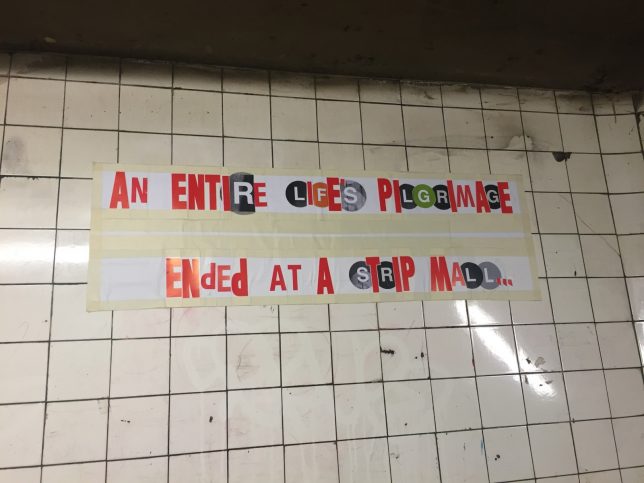 Last Sunday I committed an illegal act. Being someone who always tries to do the right thing, well, this makes me tend to look over my shoulder now and wonder what might happen! Will the internet police find me, locate the crime scene, and inflict some punishment? Probably not. There are likely bigger problems at hand to solve when it comes to New York City underground, illegal activities. Plus, Al Diaz and I are long gone and how would they even find us…?

They are ironic, frequently humorous, slicing realities that are not easily disputed.

I was really just a remote accomplice, merely a lookout who observed and swiftly put away the paraphernalia needed to install signage in a New York Public Transit passage that is not supposed to be posted there. As soon as the sign is discovered, it will likely be torn down, since its presence is considered to deface public property. Unless, ironically, the piece is discovered by a worker who reads the message it contains, takes a special shine to it, and decides to leave it be for a day or two, and turn a blind eye.

So what was it that was installed? The creator, Al Diaz, might call it an anagram, a phrase, or word play. Al is a wordsmith extraordinaire, with a historic and well-known provenance of public mark-making, going back to his own BOMB1 signature tags and SAMO partnership in the late 1970s with Jean-Michel Basquiat, who later became a Neo-expressionist, blue chip artstar.

I like to think of Al’s public signage work as a kind of poetry genre that is meant for everyone. His pieces are intended to make you stop and think. At the same time, they are personally expressive and explosive: Al is like a fun, overgrown child sometimes, with a very wise, yet cynical mind. On Sunday, he posted a piece from his Wet Paint series. This particular one read: “AN ENTIRE LIFE’S PILGRIMAGE ENDED AT A STRIP MALL.” One of my favorites states: “WE AWAIT A NEW TIME.” And another very interesting and sardonic verse: “I AM MAN • I EAT, I NAP, I PEE, I MATE AND IN TIME, I DIE.” 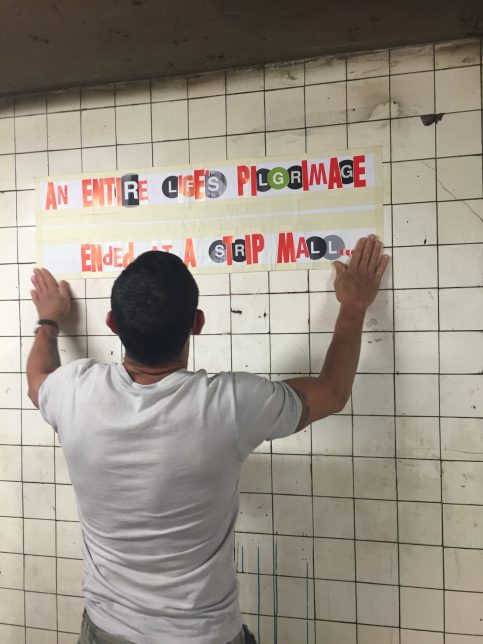 Al has written dozens of slogans for this series, which are set to be published in a future book. He enjoys the challenge created by the use of a limited alphabet, and the pieces utilize only signage lettering that is found in the NYC metro transit public areas. This project began with deconstructed, standard red WET PAINT signs, but has evolved over time to include other letters taken from wall hangings such as closure listings with letters that represent the subway train routes through the City.

Working with only these restricted letterforms, Al cuts and pastes simple, cryptic and intriguing statements that reveal mundane human habits. They are ironic, frequently humorous, slicing realities that are not easily disputed. He has also partnered at times with another street artist, Jilly Ballistic, who pairs appropriated historical imagery that suits Al’s approach with words very well. Their work creates a new context when combined and mounted in unexpected public spaces.

It took less than 60 seconds to post Al’s message on the white tile wall and document it at 9th Street/4th Avenue Station, R, F & G Trains in Brooklyn, and then we were on our way. Just a couple people passed by during that time, as they hurried on. One character “got it,” and stood watching and giggling. (Sure, he might have had other issues that made him silly, but doesn’t at least half of New York have those?)

Next time you are in the City, keep an eye out for Wet Paint—you might just find yourself laughing with yourself, and this time, it won’t be your smartphone that makes you smile alone—it will be real, gritty, plain and simple L-I-F-E .