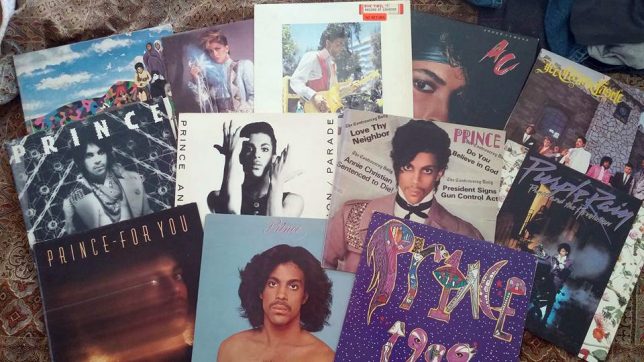 I went to a graveyard to pay my respects to a man I never met. Why? It was an unplanned stop in my itinerary of art research for the 2,000 mile trip to New York City, but the pilgrimage suddenly seemed necessary. There have been so many passings of influential artists this year. Just midway through 2016, painful losses sting, tickle and trouble my daily movements. Bittersweet images and stories rotate constantly on news media feeds, magazine racks and newsstands…and in my head.

Are we so close to these artists because we were the last generation to save up our money to buy vinyl records?

David Bowie, Alan Rickman, Prince, and Muhammed Ali. In the very same week, Prince Be of P.M. Dawn, and the 27 Club once again opened its pearly gates for Anton Yelchin. I’ve been thinking more than ever about fallen heroes who inspire and move us. I know people of all ages feel painful loss, but my fellow Gen Xers seem to be taking 2016 extra hard. Social media magnifies this; perhaps it’s partially reflective of our time, that I have an easy window into so many others’ thoughts. But I think there might be more to it.

Is anything different about the way my generation mourns artists? Throughout 2016, I’ve heard things like:

“The purple sadness is setting in.”

“I can’t even. Some of you know how gutted I am…I feel like I lost my best friend. His music has always been there for me.”

“Today I am a pencil without an eraser, full of lead, with a broken tip and no sharpener.”

“David Bowie…got me through high school and made me believe in a world where everyone had a cool wardrobe pulled together from thrift stores and fabric paint and everyone wore makeup and everyone had an awesome record collection and made art and put a shotgun to their fucking television.”

We are listening to Purple Rain and Ziggy Stardust on repeat while wearing purple. Not for hours, but days and weeks. Is this all because we are a latchkey generation of jaded kids who raised ourselves alone while our parents worked; wearing torn jeans, riding on skateboards, listening to boom boxes, inhaling drugs, staying out late, and amusing ourselves with a multitude of toys and risky activities, none of which had anything to do with wifi, digital downloads, airbags or terrorism? Tough X knew how to be creative, how to have fun, and we still appreciate the same.

Our music was our heartbeat, best friend, and the thing that linked us intrinsically to other kids, rather than mobile devices and apps. In those days you could see a great concert for under 20 bucks, and pick up a rad souvenir T-shirt (ironically, back in style today in a big way, maybe because we Xers love to dress our kids, nieces and nephews in them?). Musical acts didn’t rely on show profits alone, because pirating was a marginal problem: Loyal fans bought your record, T-shirt and went to all your shows. That’s how it was. 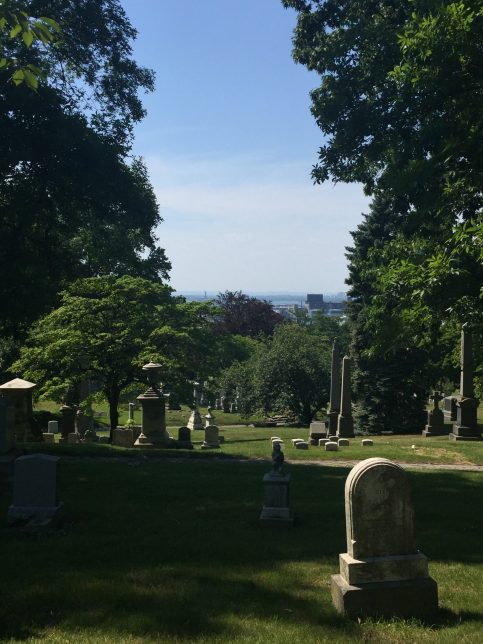 View of New York Harbor and the distant Statue of Liberty. Photo by Mariah Fox.

Are we so close to these artists because we were the last generation to save up our money to buy vinyl records? Physical albums had beautiful graphics to collect, lavish and pore over while we listened, and song lyrics to read and penetrate. Or as one of my friends pointed out, remember when we used to pop in a cassette, stop and rewind over and over until we could understand every lyric? That took time! No, we didn’t have the internet back then to give us quick answers. Artists and what they produced were our confidantes, our constant partners, what the post-X generation coined, “BFFs.”

Or maybe, Xers are extra torn because those artists showed us that it was OK to be ourselves, and to express it in a multitude of ways. Bowie, Prince, Be, they were all about that. Dancing to their own beat. Cutting a path. Unafraid to navigate the world “as is” and forming original molds. Pioneering, revealing, combining and trying things that simply hadn’t been done before. I admire that. So much. To hell with those who thought it odd or inappropriate: My generation celebrates imperfection and grit. And thus, we mourn heavily these losses.

In June, the Green-Wood Cemetery in Brooklyn is a lush, flowery green labyrinthian coil of paths, none of which are straight. Though the day was hot, its vast, hilly interior acres were cool, peaceful and strangely inviting. Thankfully my friend knew the way; I would have been lost for hours otherwise. I straightened out the mess Jean-Michel Basquiat’s fans had strewn around his headstone and left some wild roses I picked. I was impelled to do this, though I know that the 27 Clubber was a slob and probably wouldn’t have cared. My pilgrimage felt complete, or so I thought. 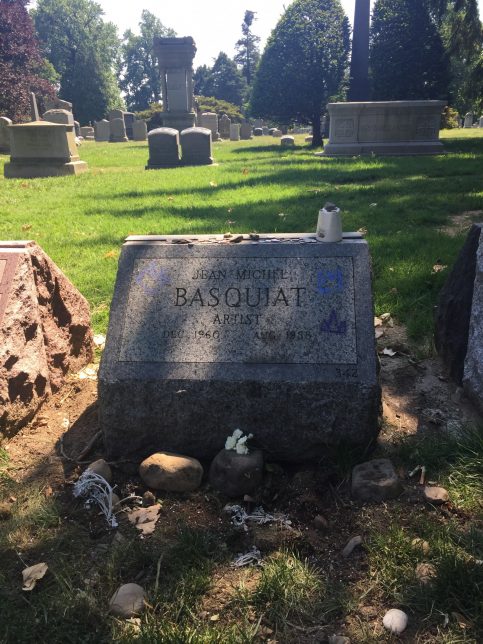 The next day, at the Museum of Modern Art I unexpectedly encountered an enormous, stunning Basquiat work as I rose to the top of the escalator. Last time I’d visited and inquired, they’d snootily told me he “wasn’t normally on display.” What a difference a wildfire of internet propagation and a few years can make. Now Basquiat is the first thing one sees! My heart pounded when I first realized what I was seeing, and as I neared the work, tears actually sprung to my passionate Gen X eyes.

I stayed for a while, inspecting the lines, the colors and every detail. I knew it was almost time to leave, though, when two appreciative and excited Millennial female fans rushed up as I was looking close and said, “Do you mind getting out of the way so we can take a picture?”

They didn’t stay long at all.