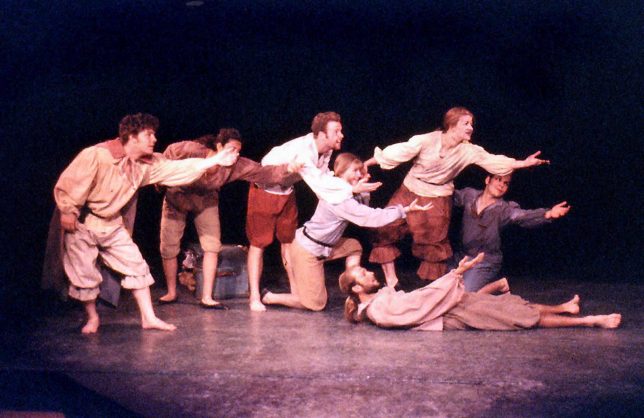 Rosencrantz and Guildenstern Are Dead, Theatre-in-the-Making, 1991. Photo by Paul Ford.

This was originally published at Paul Ford’s blog and is posted here with kind permission.

Because of an interesting consequence of marriage, I am not infrequently afforded the opportunity to see theatrical productions in Budapest.

I love seeing plays in foreign countries, although I have tin ear for languages with barely survival skills in Spanish and French—and not even that in Hungarian despite the fact that I have been married to a most extraordinary Hungarian goddess for many years. Many have presumed that my inability to understand the cognitive elements of a production in Spain or France or Mexico or Italy or Hungary would prevent me from wanting to see foreign productions, but the opposite is quite true. I adore seeing shows in which I am not distracted by such trivial concerns as the meaning of words.

This was the first of many times that I was subjected to Hungarian curtain calls.

I have on several occasions been able to see shows that I know quite well. The first play I saw in Budapest was Rosencrantz es Guildenstern Halott, which I saw within a week of having closed a production of Rosencrantz and Guildenstern Are Dead I had directed at the University of New Mexico. I’d also directed the play ten years earlier for Theatre-in-the-Making and could follow the text line by line. I found myself staring wide-eyed at a very different take on this magnificent play.

R&G is Tom Stoppard’s hilarious and horrifying take on the plight of two characters from Shakespeare’s Hamlet and their inability to control their own destiny in the court of Elsinore. The Hamlet in this Hungarian production was prone to crawling naked across the stage, drawing pictures of vaginas and penises in chalk as though he were leaving snail trails. Although this contrasted rather sharply with any concept that had ever crossed my directorial brainpan, I could find much room in my heart to justify and be enlightened by such a choice.

And the production was quite good, which is often difficult for me to admit about productions of plays I’ve previously directed since I usually trip over my own biases and ego. (Oddly, this doesn’t seem to be the case with productions of Shakespeare, which I might love or hate, but not because other actors and directors have made discoveries beyond my thinking. Indeed, I tuck these ideas into a bag and will happily use them myself if the opportunity presents itself.) But the acting in Rosencrantz Es Guildenstern Halott felt honest and deeply committed and skilled, and I was excited to see this wildly different approach—one that I was not interested in delivering myself, but valid within its own world.

This was the first of many times that I was subjected to Hungarian curtain calls. I use the word “subjected” advisedly.

Theatre is an important part of Hungarian social life. There are dozens of professional theatres in Budapest and they are well attended. Shows will enter a repertory within one of these companies and may stay in production for multiple seasons. They are advertised on the street and in the metro and there is a social awareness of both the company and its lineup of shows. Crowds are eager and attentive and you’d better get your tickets well in advance because, despite the great number of performances on any given night, there will be throngs at the door and in the lobby and a full theatre.

In general, the actors in Hungarian productions “chew the furniture”—which is a theatre term meaning they are archly melodramatic. The comedies are played flat to the audience with strong indications of where the laughs should be. The dramas are grand and heroically tragic and much suffering ensues. To someone who has long taught actors about reduction and minimalism, emphasizing a deep contrast between the inner and outer realities of the characters’ experience, the grandness looks rather silly. I also find it enlightening in a manner that I would not have anticipated.

But the curtain calls. Oh. My. God.

At show’s end, the audience begins applause as they would in any western theatre production. The actors appear and bow and retreat. The audience then falls into a rhythmic clapping that accelerates as the company, looking rather sullen, returns again for individual and company bows. The pace of the clapping slows and deepens and then speeds again as the company appears yet again for another company call and then slows as the company considers retreating, but relents and sends the lesser characters forth to bow as a group and then individually. These performers then retreat as the characters of middle-size roles arrive to bow in a group—and then individually—and then again as a group. The lead actors reluctantly are then drawn forward by the clapping demands of the audience and bow individually—and then as a group—and then again individually—and then again as a group. All the while, the applause finds new rhythms and new ways to become insistent so that the entire group is called forth again for a group bow—and then individual bows while standing within the group.

This entire process may be repeated again.

A couple of years ago in Budapest, for a musical production made from the American movie of Ghost (imagine a group of Hungarian actors/dancers attempting to capture the essence of African-American life in Harlem by wearing afro wigs and dancing “jivey”), the entire curtain call ritual was repeated multiple times and included group and individual bows for the translator, the director, the stage manager, and the producer. The curtain call lasted over 25 minutes. I am not kidding.

All of this is conducted by stoic faced actors who look as though they’d rather be having a beer, but accede reluctantly to the demands of their irritatingly insistent public.

Actors who have worked with me know that I believe the curtain call is where the actors have an opportunity to thank the audience for being the other half of the dialogue, without which the actors would just be masturbating on an empty stage (and heaven knows, that happens often enough anyway). I prefer calls where the company bows together and applauds their audience and thanks the staff that has supported the creation of production. Certainly there are instances where individual actors should be acknowledged for the performance of extraordinary roles, but it is a humble task and best performed without display of ego or pique.

And I also understand that I need to make room for other traditions and that I shouldn’t judge this ritual from the narrow perspective of my own biases on this side of the Atlantic. Nevertheless, I often find it difficult to stifle laughter as my hands become raw while trying to be appropriate—maintaining applause with the audience—to celebrate a group of performers who seem terribly annoyed by my enthusiastic approval.

At which point, I’d rather be having a beer myself.