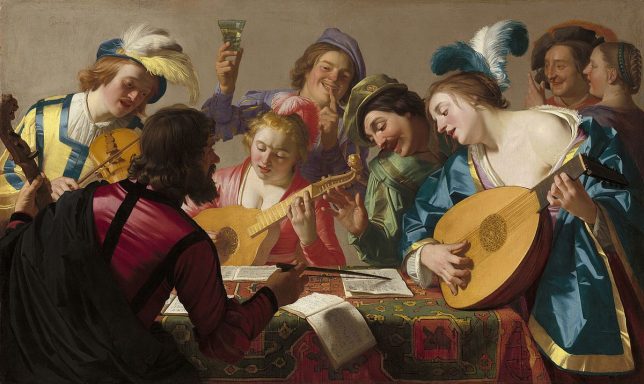 Music is a very powerful thing. Depending on the genre, tone, or lyrics, it has the power to help or distract us. If the listener wants music to help with focus and concentration, for example, they may opt for Brian Eno or Erik Satie. However, there is also a difference between passively taking in music and creating music oneself: In fact, playing an instrument or singing can act as a therapeutic, cathartic experience—as well as an energizing or meditative aid.

Because they often write about situations fraught with emotion, writers often learn far too well to detach themselves from their emotions; for those of us who do this, music can serve as an effective bridge between the logic of language and the emotions we want to illustrate through our writing. Music can allow writers to get in better touch with the core of what they’re trying to communicate. In fact, sometimes music becomes a necessary interdisciplinary component that makes one’s work more accessible to oneself and others.

Some of us writerly types may find we’re closet musicians, of sorts.

I’ve always vacillated between music and writing. In my early twenties, I remember a former partner asking me to pick one thing I wanted to focus on and encouraging me to focus upon that and that only. I chose writing. I chose writing while in high school and college, despite having played a number of theatrical roles as a child and throughout junior high and high school, even waffling between English and music while attending Reed College in the late ’90s. I chose literature and humanities because they were genuinely interesting, but also because they came more easily for me: I’d been reading and writing since I was four, after all. I knew I was good at it, and it wasn’t a challenge, so the decision to major in English felt, in a way, like a cop out.

I chose not to major in music because it was difficult. It was also intimidating: at the time (1996-2000), there were only a small handful of women majoring in music; the majority of music majors were men. This was perhaps due in part to the heavily theory-based curriculum, and the fact that the faculty seemed oddly biased toward men. They tended to treat women a bit like the subjects in an English Renaissance piece by John Dowland called “Flow My Tears,” originally published in the year 1600:

Flow my tears fall—from your springs
Exil’d—forever let me mourn.
Where night’s blackbird her sad infamy sings,
There let me live—forlorn.

In other words, women weren’t the composers and writers of operas, symphonies, and musical sequences; rather, they were the subjects of said compositions.

More importantly, though, music felt dangerous to me because singing and playing the piano was always associated with emotion—which was strictly forbidden as something to put on display, in my household. Having been raised in Guadalajara, Mexico, my mother had this concept drilled into her, as a girl: “Never show weakness!” her father would tell her. And so she told me the same thing. I played for hours on the piano, weekends, and she’d always say the same thing to me: “Play something happier! Play ‘Tico, Tico!’” “But I don’t know how to play that one, Mom—remember?” For me it was always U2, The Smiths, Tori Amos, Nine Inch Nails, The Cure: you know, the original emo-masters.

Not coincidentally, the times in my life when I turn most to music and song are the times that are the most stressful, the most emotional, and the most difficult to deal with. While visiting my family, this summer, I found songs coming up from out my throat and mouth without much ability to control it. Singing helps me breathe: it’s meditative; it’s cathartic. Most importantly, it’s raw emotion in pure form. Writing takes emotion and wrangles it down into lines that are controlled, manageable, and intentional in their effect. Music, by contrast, doesn’t need words.

Habit is a funny animal. On the one hand, it’s amazing to witness the way that muscle memory allows us to ride a bicycle without even thinking about it. On the other hand, habit can also exacerbate negative patterns of thinking that emerge randomly during moments of frustration: “I’ll never be good enough,” or “I’m an idiot.”

Poetry and music have always melded together very well.

Or that common curse that afflicts so many artists and writers: imposter syndrome. Neil Gaiman explicates the phenomenon brilliantly in this now-famous commencement speech, in which he shares his longstanding fear that one day, someone would show up at his door with a clipboard to inform him that he’d been found out: He was a fraud, they’d been watching him, and they were there to take him away. Those little tick-phrases in our heads are anything but helpful, of course. They require our attention to be able to talk back and respond, calmly but firmly: “Now, you know that’s not true! You’re capable. You’re intelligent.” But writers write for a reason: Oftentimes, writing’s the only thing that allows us to get those ugly voices out of our heads and onto paper, in order to wrangle them into something beautiful.

In the late 1990s, researchers discovered that the hippocampus is capable of producing new neurons into adulthood—despite a widespread and longstanding popular belief to the contrary. In other words, while we may be creatures of habit, it’s possible to train our brain to adopt different, healthier thought patterns that allow us to eventually feel calmer, happier, and more at peace with ourselves—in spite of whatever is going on around us. There are also studies looking into the connection between music therapy and neurological “rewiring,” so to speak, so as to establish new habits of behavior. Cognitive behavioral therapy can help repair memory and establish of new patterns of thinking. For writers, especially, this is a welcome change from older models of talk therapy involving journaling and writing-related release of traumatic memories; in fact, for writers, more writing about past negative experiences can feel counterproductive, since we spend so much time putting our thoughts on the page, regardless.

For those of us who identify as writers, this finding is crucial to taking major steps toward better self-care and psychological revision of negative habits of thinking. Music can serve as a bridge between emotions and words. Singing, in particular, forces us to push air out of our diaphragms, chests, throats, and mouths, allowing us to listen to ourselves with color and joy—rather than merely staring the black typeface on a screen, page, or typewriter in front of us. Perhaps we should let it take us over, sometimes—if only for a few hours.

Who knows? Some of us writerly types may find we’re closet musicians, of sorts. We may also manage to find ways of helping others through poetry, lyrics, and song. Poetry and music have always melded together very well. Maybe they are more connected than we realize; we simply need pick up pens and draw lines between in order to see what was right in front of us, all along.