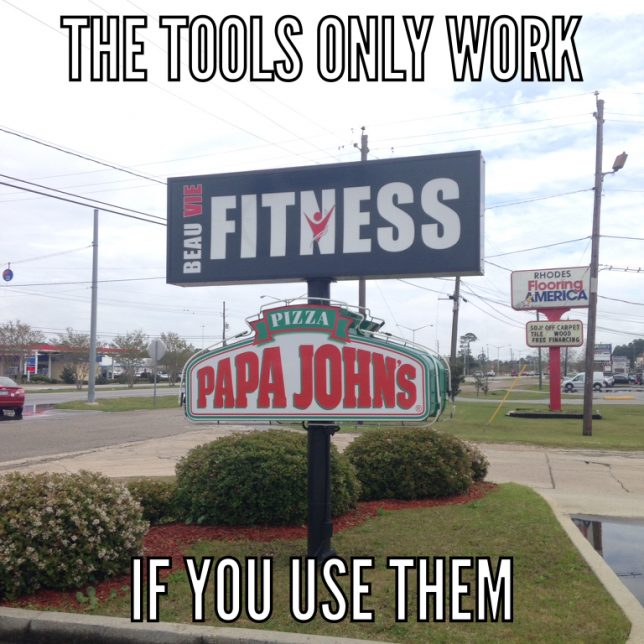 I had a fascinating conversation with a perfect stranger the other day. (As of late, these have been my favorite kinds of conversations.) We got on the topic of all the weird games we play with ourselves in order to trick ourselves into changing.

He said, “I actually got a dog in the hopes that it would make me a morning person. Instead, I have created a lazy dog. Now if I do wake up early and want to go for a walk she just rolls over and says, ‘No thanks, I’d rather sleep.’” Of course, this made me giggle because talking dogs are hilarious.

Why aren’t you cleaning out your inbox? The Human Condition. That’s why.

So I told him about all the different tricks I tried to keep myself better organized. The calendars and items I had purchased, the systems that would take whole days to invent. What finally worked was something super simple that I already had before all that nonsense. Look at how much time and money I had wasted on that other stuff!

I told him, “One big lesson I’ve learned over the past year is that there are lots of tools I already have, but the tools only work if you use them.”

“The tools only work if you use them.” He repeated. “You know, you’re right. I’ve never heard it worded like that before. That’s some wisdom right there. You should make a meme for that.”

I took the above picture I while on the road in Mississippi. I feel it captures the spirit of the sentiment.

I’ve never been called “wise” before. (I’ll take it.) But seriously, it’s absolutely true. I know that if I set the timer on my phone for three minutes and just use that time to unsubscribe to a few of the email lists that I never read, my inbox wouldn’t be so flooded every day. But I don’t do it. And I know if I just clear a spot on the floor, I can march in place while I watch my 20-minute program and at least that cardio is better than no cardio at all. But I don’t do it. And yet, I reserve the right to complain that my inbox is a disaster where I can’t find anything and that I never have time for cardio.

And I’m not alone. Everyone I know is like this. So here’s my question: Why? Why are we like this?

I’m glad you asked. As it turns out, I have a theory. I believe it all comes down to control. How little we have, and what lengths we will go to obtain it. Ooooh. Existential!

Over the last two years, The Universe decided to renovate my life. I was served no notice. It never came across my desk for approval. And once the first load-bearing wall came down, it was all over. It finally ended (I hope) with the death of my cat, which officially pushed the entire experience from “Shakespearian tragedy” into “country song.”

I only bring that up at all because I have had the most epic change in perspective I’ve ever experienced in my entire life. Imagine never being able to see the color blue—then one day you can, and you see the sky for the first time. Boom. Life-changer.

So here’s one of the things I can see now: There are two kinds of change. Change that is thrust upon us, and change we control.

We have no control over the first kind. If a tornado hits your house, or your partner is hit by a bus—there is nothing you can do about that at all. You just have to deal with the aftermath. And it’s traumatizing and awful and terrifying.

But, we CAN control small day-to-day things. We can control what clothes we put on. We can control whether we brush our teeth or not. We control our inboxes and our cardio and the food we put in our mouths. All of these little things add up into how we feel about our lives.

So if my inbox is a mess and I’m overwhelmed by it—that’s because I did that. If I’m not sleeping well because I’m not doing cardio—I could change that if I wanted to. If I don’t feel prepared for the upcoming show because I didn’t practice enough, that’s my fault. If my sheets smell weird because I didn’t do my laundry this week—I can change that. Add that to 100 other little day-to-day things and what is the end result?

I FEEL that I have control. I feel like I control every tiny bit of my world. Even the bad parts. Especially the bad parts. See? If I believe I control the bad parts, there’s nothing scary about that. And I, as a human being, will do pretty much anything to avoid feeling scared. I delude myself. On purpose.

Why aren’t you cleaning out your inbox? The Human Condition. That’s why.

So—I don’t know about you—but the moment I realized I was just deluding myself, making changes got so much easier. Suddenly adding structure to checking my email wasn’t a big deal. Suddenly I was doing cardio without really thinking about it. Suddenly making practicing the priority in the morning instead of hopping on the computer right away was a no-brainer. Suddenly I WANTED to use the all the tools I had to make my life better.

Because I can control some of the good parts too. ( <— Also a tool.)