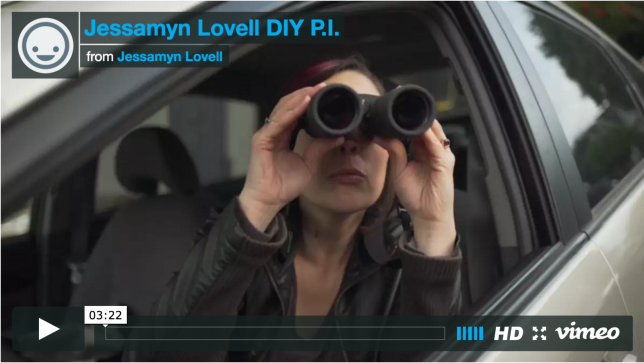 Jessamyn Lovell is embarking on a new mission, The P.I. Project, and will be sharing updates at her Patreon page. She has kindly allowed Pyragraph to share some of her posts, including the post below, and will continue to share updates both here and at Patreon as The P.I. Project continues through 2017.

Psst! Pull up a chair because have I got a proposition for you:

So I made this art project about a woman who stole my identity in San Francisco a few years back. Okay, wait let me back up and give you the whole story….

I had my identity stolen in 2011 by a woman named Erin Hart. As an artist my response to this crime was to find, follow, and photograph this woman as a way to get to know her. I made an art book about the experience called Dear Erin Hart, which was published by San Francisco Camerawork in 2015. I also made a traveling art exhibition by the same name.

As a practicing fine art photographer and a P.I. in training, I have been accepting commissions.

As my investigation into Erin Hart unfolded, I realized I needed to hire a private investigator (or three) to help me track down this elusive and mysterious identity thief. Dear Erin Hart, the project that resulted attracted international media attention and ended up flooding my inbox with messages, primarily from those who have had their identities stolen or who claimed to know my perpetrator. This public response shifted the meaning of the project for me from being a pursuit of my identity thief for a small art piece to a project in which I exposed her identity for public commentary and judgment. For more on this project listen to Episode 556: Act III of “This American Life” from May 2015. Working closely with a team of three seasoned private investigators taught me on the one hand how easy it is to find information about anyone, while simultaneously how much time, and how many resources and tools are needed to uncover information about someone who specifically doesn’t want to be found. I became fascinated with how closely connected the power dynamic in the use of photography is with those at work in private investigation.

In early 2016, I embarked upon a mission to learn the tools of the trade first-hand and apply for my actual private investigator’s license. In order to do this, I need to acquire 6,000 hours of investigative work learning the necessary skills along the way. Incredibly, as I write this, I have already passed the half-way mark of 3,000 hours, in large part because of my past projects, including Dear Erin Hart, and No Trespassing. My goal is to become a licensed P.I. by 2017, well within the within the licensing timeline parameters and just in time for my solo exhibition at Central Features Contemporary (Albuquerque, New Mexico) in Fall 2017.

As a practicing fine art photographer and a P.I. in training, I have been accepting commissions from interested parties who wish to own a dossier, in the form of an artist book, of their own private investigation. These completed dossier-artworks will be considered for inclusion in my solo exhibition at Central Features. I will also document the process of each investigation as works in the exhibition.

I am offering a unique opportunity for my Patreon supporters to join me in my journey to becoming a P.I. as it unfolds. As a sort of DIY reality crime show, I post regular updates to my Patreon blog following the progress of my cases. When you contribute on a monthly basis at any level, you are investing in my work as an artist and you will also be given exclusive access to updates not publicly available. I will make updates as often as I make progress in my hours. If I work 30 hours a week on my investigations I should meet my goal easily so updates might happen as often as daily or weekly. There are incentives for higher-level contributions and I will be adding even more incentives as the adventure unfolds, documenting the process along the way. I will also release patron-only video performances and possibly access to a private Instagram or Snapchat account.

If you are looking to collaborate with me on a case of your own, you can subscribe at the $100 a month or higher support level for limited or continued periods to hire me for your own specially designed commission. Once you commit to one of those support levels, I will contact you for a live Skype intake interview to determine how to proceed. If you are local to New Mexico, you can come for an intake meeting/performance in my office.

All the final artworks will be available to the public at my solo exhibition in fall 2017 but only Patreon supporters get to come along for the ride, collect art goodies along the way with the option to commission a personal mission of their own. Join me in my adventures as an artist and a private investigator in training at whatever level works for you!