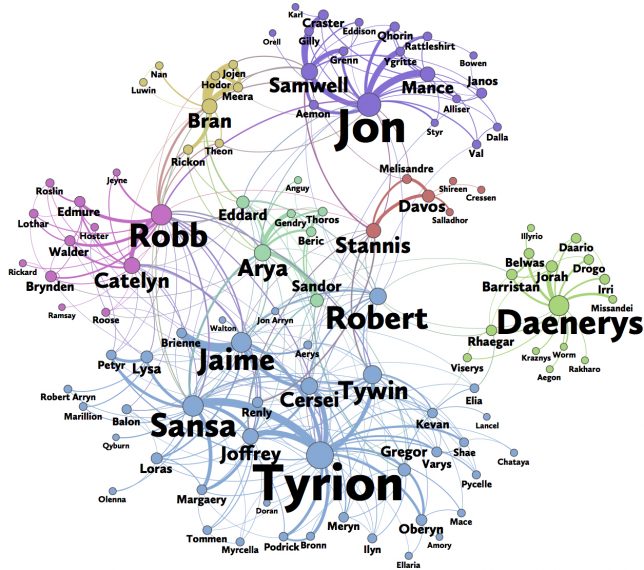 Image by Andrew Beveridge, courtesy of the Mathematical Association of America.

Networking. A term thrown around as often as Game of Thrones references I pretend to understand, and equally as necessary for surviving the contemporary workspace. Contrary to popular belief, the act of networking is not power watching The Social Network until you absorb Zuckerberg’s entrepreneurial spirit and luscious locks. Urban Dictionary, the authority on everything, defines it as follows:

“A yuppie euphemism for kissing ass in order to get a job or obtain a raise or promotion.”

Example: Regardless of your skills, intelligence, or education, if you are not good at networking you will always earn minimum wage and live in a trailer park.

In case you were wondering, Urban Dictionary also offers a helpful definition of Game of Thrones:

“An HBO show based on George R. R. Martin’s books. The show’s got a great deal of politics, royal intrigues, incest, murder, warfare, violence and sex. Medieval genre and features lots of swordplay and riding horses. And a lot of violence and sex. Did I mention the sex? And drinking and a dwarf with an obsession with whoring.”

Example: Did you see Game of Thrones last night?
Yeah, and I can’t believe they tried to murder that kid.

Okay, but so networking. Sounds business-y AF, and therefore fundamentally inapplicable to those of us in creative occupational fields. Right? Isn’t that why we chose the path more closely aligned with our passions and interests, precisely to avoid this kind of selling out to the Man and “kissing ass in order to get a job”? The short answer is yes. But Jon Snow comes back and there are a group of people who cut other people’s faces off and steal their identities and most humans I know are passionately invested in a television show about these things, so it’s safe to say shit quite frankly doesn’t make sense sometimes.

What it seems to come down to is that success is twenty percent skill, thirty percent dry shampoo, and sixty percent your ability to play well with others. I am assuming you failed to notice my math didn’t add up, because if you are anything like me you adamantly avoided mathematics throughout your education. Lucky for us, math is negative ten percent involved in success and unless you are at a physics convention, entirely unnecessary to networking. Today marks yet another day none of us have used symbolic logic, but have presumably interacted with fellow humans. Others are the ones hiring you, working with you, buying tickets to your shows, purchasing your art, breathing too loud too close to you, and apparently obsessing over games and thrones. This makes others pretty critical to any sort of success.

So exactly how does one go about this whole shebang? Personally, I am an advocate of a nine-prong Game of Thrones inspired approach: the Seven Kingdoms of Networking. Because George R. R. Martin didn’t excel mathematically either.

Critical to this step is possession of a truly excellent opening line:

“What are your thoughts on recreational usage of bath salts? Asking for a friend.”

Another option is anything Game of Thrones related. There is a one-hundred percent chance that this will lead to a spirited discussion, eighty-seven percent of the time. People love these dang thrones more than they love Pokemon, more than they love breathing, more than king Jaime loves his sister (ew). If I had a nickel for every time the line, “So, John Snow. Right?” facilitated an entire conversation to which I only contributed encouraging nods, I would have at least twenty cents. Which in modern money is not a lot, but in at least one of the Seven Kingdoms would buy you some…mead. And might I add on this topic, there seems to be a notable absence in this series of both games and thrones, and an excess of dwarfs, fire, and skeletons that come alive.

2) Once successfully engaged in riveting conversation, masterfully transition the discussion toward a series of inappropriate ‘would-you-rathers?’.

“Would you rather play seven minutes in heaven with Bolton and his dogs, or strap that rat torture contraption to your body and wait for the rats to gnaw through your flesh?”

I vote rats. Seriously though, do take the time to ask what any new acquaintance does both professionally and recreationally because the thing about people is they know other people. For instance, upon meeting me you wouldn’t know I touched Alexander Skarsgard once. Okay, I saw him ordering coffee once but what if circumstances had been even marginally different and we had by chance spoken, bonded over Game of Thrones (ahem networked) and became BFFs. You wouldn’t know this by looking at me, and for you as a screenwriter this would be a valuable connection to have.

Moral of the story: be nice and open to everyone you meet, because you never know the people a given person might know and how this might be beneficial later.

3) More than what connections they offer, the best thing about others is they know things that you do not.

Networking is not only about cultivating connections for potentially lucrative purposes, but sometimes to simply learn something new. Every person I meet, I try to discern what it is they know that I do not (i.e. Game of Thrones plotlines). In social situations it is tempting to adopt a know-it-all persona, but no one knows it all and this attitude comes off as abrasive. It’s hard to know it all without actually attempting to know more things than you currently do. It’s also hard to speculate about the progression of a show of which you have only watched half of a single episode.

Things I do not know how to do: psychically communicate with animals. If I encountered the crippled Stark kid who rides around on a giant human at a casual Saturday evening Lannister shindig, I could strike up a conversation about any potential relation he has to Ironman Tony Stark. He could then inform me about his dog-wolf’s thoughts and offer pointers for cultivating an intimate canine-human bond. I could then eventually become Cesar the Dog Whisperer 2.0, aka everything I have ever wanted.

Find their address online and show up, preferably prior to 6am on a weekend to show the degree of your commitment to their friendship. Follow up afterwards every day, at least seven times a day. It is a proven fact by someone somewhere that proximity improves affection. To borrow the term from New Girl, “Biden” them i.e. be there. Be there often and always and if you get a tattoo of their face on your upper right thigh, be sure to let them know.

I was just kidding about #4.

6) Cyberstalking, however, as always is more than perfectly acceptable.

After you encounter someone interesting, look them up! See what information interspace has to offer. Most folks will not immediately inform a new acquaintance of their entire biography and if they do then they are the worst. I encourage you to Google and then Facebook creep on their sister’s new baby, their high school prom photos, and if they “like” GOT. The more you know, people.

7) Then connect online: Link that shit in.

I know LinkedIn is decidedly unhip, but aside from providing ample joke material it features the entirety of users’ resumes, which is absolutely the coolest. Browsing this handy website can give you an idea of the career paths those you admire have taken, and offer you the ability to connect with those whom you have already met PLUS see who they have connected with. It all goes down in the LinkedIn. How else would you know that Aidan Gillen starred in two seasons of Queer As Folk before scoring his dream role Petyr “Littlefinger” Baelish? Well, IMDB but that is likely because I Googled Littlefinger based on the assumption that it is now his preferred designation.

After repeatedly Facebook-poking your new acquaintance, message them to simply say it was nice to get to know them the other night. Perhaps suggest lunch, or coffee. Others love lunch and coffee! Show up early or on time for any rendezvous, and it is imperative that you follow through with any plans. It is so common these days to engage in empty plan-making, proclamations that “we should do something soon” with each party fully cognizant of the statement’s falsity. This makes it refreshing and memorable to be someone who follows through. Don’t be that empty-promise person, it reflects poorly upon your character because that person sucks.

The power in being genuine cannot be overstated, and what do you have to lose anyhow? The next time you see said acquaintance out in the world say HI in all caps. People like to be recognized, especially enthusiastically, and you gain nothing from being nonchalant.

9) Use these simple steps and eventually you will become a person to be networked with: a sought after connection because you have cultivated relationships with a vast number of interesting people.

Plus, you will learn the entire Game of Thrones plotline without having to watch a single episode. That alone makes interacting with other humans worth it.