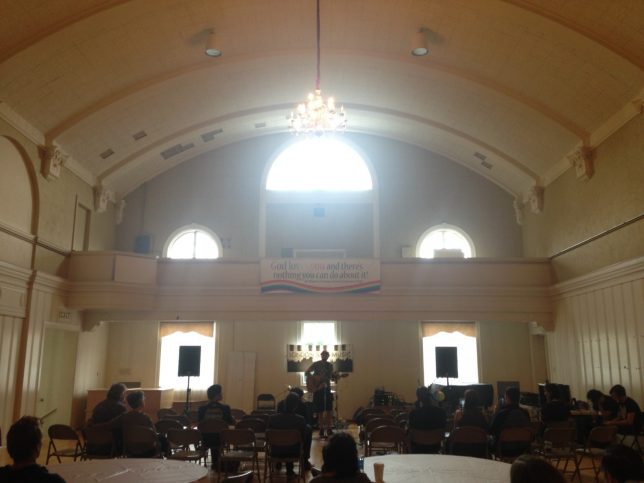 I recently attended and performed the Seattle Acoustic Festival, a small music festival focusing on the singer-songwriter genre. Many talented people were on the lineup, and also, me. I caught as many performances as I could. I consider it research, to see what else is going on in my field, and to make sure that what I’m doing is still distinct and memorable.

Rest assured, audience: I did not find any other banjoists singing about cyborgs, space travel or the apocalypse.

However, this research did shed a clear light on something I’ve often thought about: the distinction between a musician and a performer.

spends oh so much time perfecting the notes they will sing or play, and how to recover if a wrong note is hit. Their harmonies are crisp and precise. Their playing is thoughtful and intentional, no matter the instrument. This artist knows their scales, if not consciously, then intuitively. This artist is best described as methodical, insofar as they perform the songs.

Anyone who knows me and my work probably can guess that I fall in the second category (yes, I know I need to practice my scales, I’M BUSY RIGHT NOW). But importantly, an artist can and probably should be both, to the best of their ability. Live performance is absolutely essential in today’s music world (for a variety of reasons not the purview of this article).

The singer-songwriter is an archetype in today’s music scene. It’s a culture with its own traditions, tropes, stereotypes and faux pas. It’s a muddy pool, full of conflicting ideas and hidden treasure. As artists, we must dive deep into our particular culture and examine every aspect we find at the bottom, then choose which ones we take with us back to the surface, and which ones we leave for others.

There is a style, an established format for a singer-songwriter’s performance: We tell stories related to the songs we sing. Tell a story, sing a song. Tell a story, sing a song. It’s what people expect. It’s what people are used to. We are earnest. We are truth-tellers. Three chords and the truth, sung at the local coffee shop after dark. There’s an established idea of what you’re supposed to be doing.

The song’s inspiration is often the least interesting part.

Since there’s an established idea, that means people have an expectation, and you can use that expectation as part of your art. You can distort it. You can reject it. You can play with it. An audience’s expectation of you is material you can shape, and you don’t have to follow the instruction booklet.

One of my favorite kinds of singer-songwriter right now is “The Angel Of Music Who Swears Like A Sailor.” Soaring, elegant and beautiful songs interspersed with saucy stories and dirty jokes. Mary Lambert and Eliza Rickman are great examples of this kind of artist; their performance style is a perfect counterpoint to their music. They embody both The Musician and The Performer.

I’ve taken a different approach. For me, telling truth doesn’t necessarily mean telling non-fiction. I write stories to accompany my work, or I write speeches regarding its subject, but only rarely do I discuss a song’s inspiration. That is often the least interesting part.

In the grand spectrum of singer-songwriters, I suppose I follow the traditions of The Truth Teller, but in the words of Emily Dickinson, I tell it slant; after all, the truth can come in many forms. And I gravitate towards forms of the truth that involve dragons and space ships.

How do you play with the traditions of your art form? Do you tweak them, follow them, distort them, reject them? Let me know in the comments below.