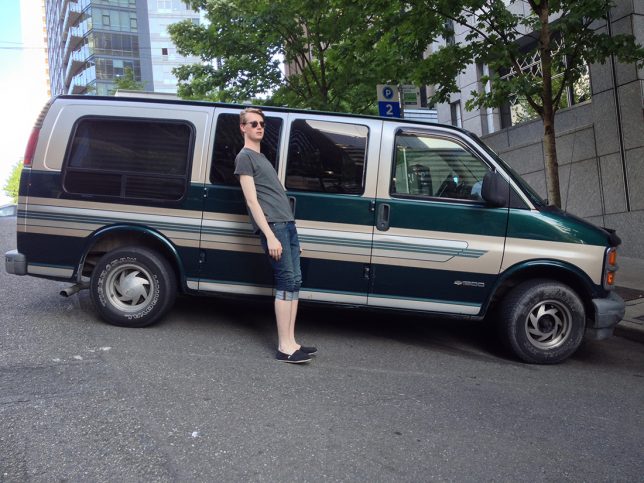 Photo of, and by, Robert Lanterman on tour in Seattle.

Next month, I am going on a 10-day tour. As with any trip, I will undoubtedly forget some things, but this time I’m writing a list of things that I might forget. I’m going to leave out “enough underwear” and “a toothbrush” and get to the good stuff. Will it help? Only time will tell.

Believe it or not, injury by tour is not the most uncommon thing in the world. My friend Russ broke his leg (here he is getting crutches) when his band SKiTTiSH iTZ toured last year. However, smaller injuries from moving equipment, side-of-the-road van repairs, etc. are more likely to happen as just part of the job. A first aid kit, even something small, is good to have for any kind of cut or burn.

One cool thing about traveling to a bunch of new places is drinking local beers or playing a house party where alcohol is freely provided to you. However, what’s not good is taking a chance that someone in your band who says they are good to drive, but actually isn’t. Hear me out—if you think you might be too drunk to drive, you shouldn’t drive. In fact, I’ve argued before that you should designate a sober driver on tour.

Bring your phone charger—save twenty bucks and a trip to Walgreens.

I also know that nowadays it’s becoming more and more common for people to get their own breathalyzers, and I don’t think that’s a bad idea. If you’ve been drinking and you feel pretty fine, what would it hurt to double check? Of course, no breathalyzer is as safe as someone who hasn’t drunk at all, but I still think it’s worth taking along.

Actually, I won’t forget this one, because if our van ends up looking like this, we’re screwed without it. Additionally, if you don’t have insurance on your sketchy cop magnet tour van, you’re an idiot. That’s all.

I probably do one or two trips a year where I forget to bring my phone charger and have to buy a new one. It is terrible and I only hope you do not make the same mistake that I have many times over. Here’s what will happen: When you find that everybody else in your band has an Android (or an iPhone if you are the one with the Android), you will go and buy one from a Walgreens or Walmart and then it will break two months later because you were on tour and had to buy a cheap-o. Bring your phone charger—save twenty bucks and a trip to Walgreens.

A lot of venues and restaurants have wifi and in my experience nothing on tour is final. Promoters cancel shows (some of them are sort of famous for this), load-in times get moved and even the venue locations can change. Remember, you’ll probably forget to bring your phone charger anyway (now I’m just being a pessimist). So personally, I try to bring my laptop. It has a bigger screen which works well with all of my organizational tour/nerd docs.

I should also mention that you should also have some kind of backup and record of the important details for each show you’re playing. I use Google Docs, but if you don’t like doing that, you could also look into some third party cloud system. Just don’t bring a memory brick around on tour with you. It’s one more thing you can lose and a waste of space if it’s not needed.

I have been hit by rain in almost every state I’ve toured toured in. Sure, it can be nice in the summer months. But when you’re down by Los Angeles and all you brought was your trendy band tee and a pair of shorts, wading through puddles isn’t all that awesome. Bring a poncho, or a snow coat and gloves. There are one million articles like this one that will inform you of what the weather will be like in each place you go. So yeah, sometimes freakishly unexpected storms hit, but a lot of times, you have no excuse to not be at least somewhat prepared.

Well, I feel like this one is pretty explanatory. Bring toilet paper every time your band treks across the empty desert wasteland that is Nevada.