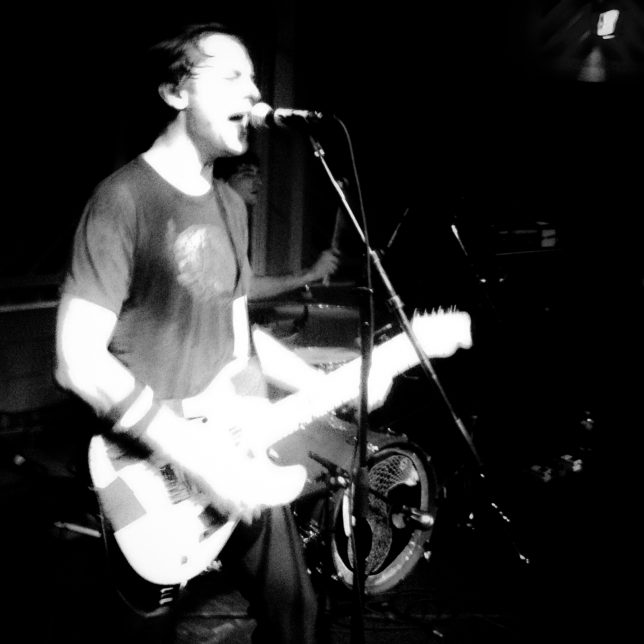 The Thermals have never had a manager. We didn’t have one when we signed to the labels Sub Pop (2002), Kill Rock Stars (2008) or Saddle Creek (2012). Not when we toured with Death Cab For Cutie (2003), Sleater-Kinney (2004) or The Hold Steady (2007) either. Hell, on all three of these trips we didn’t even have a tour manager. It wasn’t that we felt our band was too small for a manager—we’ve known plenty of younger bands who were managed long before they were making waves or money. It wasn’t that we felt that we were too DIY, either, although we’ve always been proud of doing things ourselves.

We never took on a manager because it just never felt right.

Most managers would rather find an energetic young puppy to care for than waste their time trying to teach new tricks to an old dog.

There had been offers, especially in the first chaotic nine months of our band’s existence. In early 2002 I wrote and recorded what would become More Parts Per Million, our debut LP, on a four-track cassette in the kitchenette of my one bedroom house in Southeast Portland, Oregon. The recording circulated by CD-R and word-of-mouth throughout Portland, Seattle and Los Angeles, and by summer the buzz was deafening. We were fielding interest from major labels when we had only played a handful of shows, mostly in basements and cafés, in the Northwest.

We hadn’t signed with them yet but we had met with Tony Kiewel, their head of A&R, and liked him very much. Kiewel is solid as hell and had a huge hand in the nonstop resurgence of Sub Pop after the dark days of the late ’90s/early ’00s. Our sixth show was performing for the label at El Corazon in Seattle. We signed with them a few months later and never regretted it.

We had always felt good about being in charge of all of our band’s decisions—until we toured with Matt & Kim in 2011 and learned how useful it could be having someone who could help increase record sales, concert attendance and exposure in general. We met the dynamic duo in hot-as-hell Atlanta, Georgia at the historic Masquerade Theater in the ATL’s Old Fourth Ward. Matt Johnson and Kim Schifino were as cute and genial in real life as they are on stage. Although in our collective opinion we weren’t ideal support for Matt and Kim’s ravey rock extravaganza, we were paid handsomely—some nights we earned more than we had at our own headlining shows—and to this day I consider Matt and Kim good friends.

While watching the happy couple soundcheck that first night we met their new manager. He was older, maybe in his late 50s; friendly but not a glad-hander. We only spoke for a few songs but the immediate feeling I got from him was that he understood Matt and Kim very well. He knew who and what they were as a band and, most importantly, to whom they appealed: young, passionate music fans with plenty of disposable income. He had been in the business for years and obviously knew which steps to take to get Matt & Kim to the next level after all of the grueling groundwork the two had already put in. Whatever he was doing, it was working. We did close to 40 shows with Matt and Kim that summer and every date was sold out. Their videos were getting million of views and they were licensing songs left and right. When the tour wrapped in NYC and we parted ways, they were off to support Blink-182 at arenas and amphitheaters. We wondered aloud to ourselves on one long, late night drive through West Texas, “Is it finally time to find a pro?”

I called Adam Katz, manager of our friend and collaborator Chris Walla, when we got home from tour. Katz is a brilliant man who knows many sides of the music business well. He believed it was too late for The Thermals to find representation.

Simply put: We were too old. We were approaching 10 years as a band and had to face the fact that we were far from spring chickens, no longer enticing to anyone who may have wanted to manage us in the past.

Most managers would rather find an energetic young puppy to care for than waste their time trying to teach new tricks to an old dog. I agreed with Katz. I knew he was right, and did feel some regret. Although we have always been pleased with the level of success we’ve had, it is sometimes hard to shake the feeling that we could’ve done more, that we could have reached that next rung on the ladder of success. But this was not the life that had chosen us, it was the life we had chosen.

Every record contract, every performance fee and every other choice we’ve been presented has been carefully processed by the two of us.

This doesn’t mean no one has been managing the business of The Thermals for the past 14 years. In fact, we’ve had two managers: myself and my bandmate Kathy Foster.

Every record contract, every performance fee and every other choice we’ve been presented has been carefully processed by the two of us. I read and respond to every email we receive. I manage all of our social platforms, posting at least daily on Facebook, Twitter and Instagram, to keep in touch with our fans—and keep them entertained, usually with bad jokes and Futurama stills (I know, my job is so hard). Kathy is our de facto business manager—she deals with all the numbers. Every dollar that goes out—gas, food, hotels, etc.—and every cent that comes in—sales, streams, show fees,etc.—go through her meticulously kept ledger. The amazing thing is, not only does Kathy do all the dull, tedious work of managing the business of our band, she actually enjoys it. She loves working with numbers and has taken pleasure in being the band’s accountant for every year we’ve been together. She also manages our online store—a major source of revenue for us—and even hand-writes a personal thank you on every package we ship.

I still believe that if we had met the right manager at the right time our band’s career could have been quite different. Maybe we would be a lot bigger. Maybe we’d be a lot richer. But maybe our band would be broke or broken up, crushed under lofty expectations or ridiculous, insurmountable goals.

We don’t spend a lot of time wondering where we might be under different circumstances. Usually, we are too busy writing songs, booking flights or mailing LPs and T-shirts. A huge part of our experience being a band has been how much we have learned simply by doing. By never letting anyone manage us, Kathy and I have been forced to learn how to manage a band ourselves. It turns out we’re pretty good at it. Who knows, one day we could be managing other bands—maybe yours! Hey, give us a call—we may not be pros, but we might be who you’re looking for.