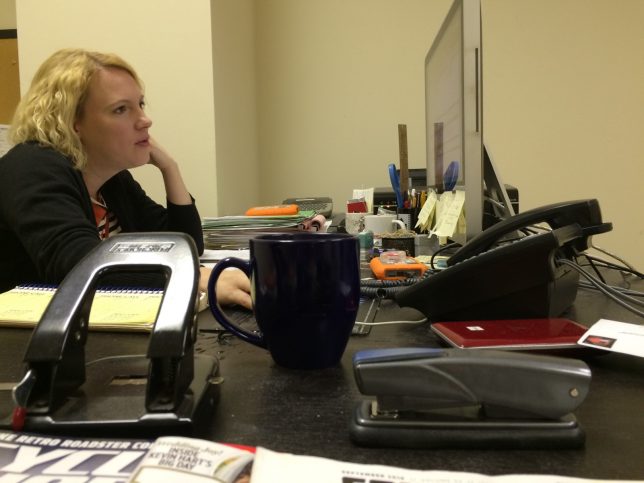 It’s been three years since I wrote my last post about side jobs and I think it’s well and fitting that I do a follow-up post about the pros and cons of my experience working a real live full-time job as an employee since I already talked about my 27 previous side jobs as a freelancer. If the term “side job” is unclear, what I’m referring to is the non-creative type of work (be it three hours a week or 40) that we as artists sometimes must take to stay afloat financially while waiting for our next big gig or while working on our projects that have not sold or gotten paid for yet. My “main job” (or “career” when I talk to people about this) is composing music.

Times are different now than they used to be due to the internet and the evolution of the smartphone. There are insane amounts of easily accessible freelance jobs that have sprung up through on-demand app services. More and more people are getting part-time gigs through Uber, Lyft, Taskrabbit, Handy, Postmates, Jolt, DoorDash, Amazon Flex, Wag, Surkus—for some people born of the Millennial generation, this is becoming the norm. This New York Times article states that people elect to have multiple jobs because they need and want that creative outlet, while Forbes says job-hopping helps people find fulfillment in their lives.

You’re spending 1/3 of your life working. Why be miserable?

Things changed for me when the laundry delivery service company that I was originally a freelance driver for started to evolve and switch up the way they ran things, and they created some new positions with the fancy pants title of “Operations Coordinator.”

The position would be between 32 to 40 hours a week with the possibility of overtime, and I would be considered an employee instead of a contractor. They asked me if I wanted to do this and I accepted.

Now basically what my job ended up amounting to was working in an office (an old flower shop storefront) helping the drivers separate and load up their orders, making sure the office tasks were done (i.e. label bags, stock supplies, email issues to the support team), and processing and weighing the dirty clothing when it came back. We didn’t actually do the laundry where I worked as we sent it out to another place (I like to think it was a giant warehouse in the style of the Breaking Bad meth factory they worked in underground). I kept this position for almost two years. Based on this, I have assessed a list of the pros and cons of a full-time side job as an employee for those of you considering whether to take such a job, or take freelance work instead.

Pros of Full-Time (Side) Job

This alone was the reason I ended up staying so long. I have been a freelancer for a very long time. Even when I worked as a personal assistant, I never ever got health insurance. With my full-time side job, I would explain with wide shocked eyes to everyone who asked about my job that I got free medical, dental and vision (OHMYGOD!), and my other freelance friends would always say, “That’s huge. Don’t ever quit.” Apparently, in corporate America, this is the norm though. For someone like me who has always had music writing or freelance non-music gigs, it was all new to me and was like Christmas. Free money? Yes please.

This is probably the thing that people love most about their 9-to-5s. You have a set number of hours. You go and work. You come home. You get a paycheck. You might get a holiday bonus (I got one in both Decembers I worked there. Cut to me freaking out each time.) It’s easy to plan your budget and you know if you can buy those extra shoes or afford a vacation with what you will be making in the coming months. There’s no struggle to find work, you just show up and get paid. Done.

In the case of my job, the hours weren’t exactly 9 to 5. There were different weekday shifts plus weekend morning shifts. You would put in your availability ahead of time and the boss would set the schedule. Some people were always free. My availability sheet would always be all over the place due to stuff I needed to block time for like recording sessions with my guitarist friend. But knowing my schedule ahead of time made it easy to make plans with people for drinks or take a weekend break if needed.

Did you see the movie Office Space? The part where Peter says, “I’d say in a given week I only do about 15 minutes of real, actual work”? This happened sometimes. And I saw it as a huge bonus. You were stuck there, you had nothing to do for a given amount of time. So what did I do? Full disclosure: nap in my car, go to Trader Joe’s, Facebook, call my mom, look at potential vacation destinations, pay bills. And since you were on the clock, you were still getting paid. In my defense, I’d like to say I was one of the hardest working and most organized employees there, so I’m not going to feel bad about doing nothing when there was nothing to do.

I would look forward to seeing some of the people I worked with each day. If the job would have consisted of me working in a basement somewhere alone, that would be boring as fuck. These people made my day and I’m glad to say although the company has since dissolved, I still talk to and hang out with several of my ex co-workers.

Cons of Full-Time (Side) Job

This was a big one for me. If you had any opinions about anything or any ideas, you most likely were listened to, but not heard. If anything was going to cost more than 10 cents it was always deemed not worth implementing, even if it would save hundreds of dollars down the line. You could talk to the cool boss about your issues, but he didn’t have much power either. If you had a question or concern about something, you were told to “email ‘community’” where your email was responded to with a form letter.

I recognized that the further down the chain you were, the more expendable you were. I heard a few times the term “that’s business” when discussing people who worked there. I get it, what you are saying is, “We only give a shit about money, not people.” I can’t be sure if this is how things are in all companies with a corporate structure, but I think it’s fucking gross.

I don’t just mean the people above me. I mean some people I was in charge of or worked alongside as well. I had to train people for the driving part of the job while I was there. I and the other “operations coordinators” encountered a few people that shocked us that they made it this far in life. Between the frustration of trying to explain some problem to one of the “upper ups” and them completely not understanding or caring, and the idiocy of some of my co-workers (how do you STILL not know how to print after three months of working here???) I was driven to quit.

No Extra Perks for Working Harder than Others

Too Much Responsibility + Too Little Money = Stress

In my last post about freelance gigs, I quoted Lester Burnam from American Beauty saying I was looking for the least amount of responsibility possible. Well, that didn’t work out here. Over the two years I was in this position, they ended up laying off several positions and giving us their responsibilities and piling more and more tasks onto us with no extra pay. I learned that when you are an employee, you have to do the job and you couldn’t opt out of tasks like you could as a freelancer. Not like I don’t drink enough anyways, but this job ended up driving me to drink as I would come home physically tired and stressed over something I shouldn’t have been stressed about.

I’ve found that in most cases, doing freelance stuff (with the exception of flower delivery) could bring in more per hour than my full-time job. That was definitely a downside to the full-time gig. However, it’s harder to find freelance gigs that offer enough hours, so the math probably evens out in the end.

So class, in conclusion I would just like to state that I stand by my choice: I prefer freelancing and having power over my hours and schedule, and variation in my days and what I do. Maybe I earn less money some days than others, and paying for health insurance myself is definitely a downside, but I have always been a big proponent of, “You’re spending 1/3 of your life working. Why be miserable?” I’ve met a lot of people who say to me,“I could never work from home, I would never get anything done,” or, “I need the structure in my life” in regards to the full-time or 9-to-5 type of job. And that is cool; my advice would be to find what works for you and do it! I just know that right now, I’m definitely happier.