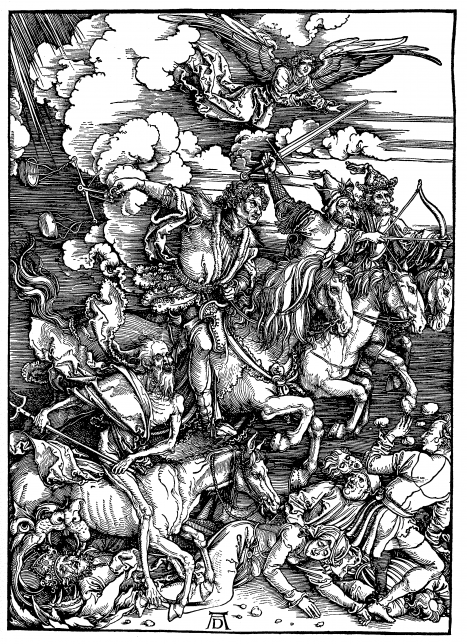 “The Four Riders of the Apocalypse” by Albrecht Dürer.

I’m obsessed with thoughts of the apocalypse. Specifically, the zombie apocalypse. I’ve watched all of “The Walking Dead.” I try to imagine the level of badass-ery I would reach in the same situations Milla Jovovich kicked ass in in the Resident Evil series. I’m convinced I can outrun the fast zombies and shoot and outsmart the slow ones.

I guess more realistically, the apocalypse would spawn like in the movie Contagion where a disease started to spread in Minneapolis and there was no cure (I thought the events that followed were extremely realistic).

What are you going to do during the apocalypse if you were previously a bassist or a film director?

Anyways, I can’t get enough of this kind of crap. Why are we obsessed with these kinds of things as a society, specifically zombies? Maybe because it’s like what Tyler Durden says in Fight Club: “It’s only after we’ve lost everything that we’re free to do anything.” And an apocalypse would definitely be setting where we all lose everything. We no longer have debt, obligations, a job. No one is richer than anyone else because there’s no government-backed monetary system. There’s no social status because there is no longer a real societal structure until you create your own and, if a bunch of the population has disappeared, pretty much you can have any material item you want (there’s probably some extra TVs lying around). Downside: most likely no electricity for your new free TV.

This situation is obviously completely scary as a reality especially if there was a killer disease which killed most of the people you cared about. But an apocalypse would also wipe out the way of life that you have now, the way you work and the way you make money to survive. How will this affect people like us as artists? If there is no money to be made, we must obviously work for food or trade work for food to survive. But will music even be a valued commodity in this kind of scenario? What would being a musician be worth then, if pre-apocalypse you made your living playing gigs or creating computer-based music as I do? Would you be able to survive playing guitar in this dark future?

Music itself has worth. It can bring you back to a specific place and time emotionally. It hypes you up when doing physical things (i.e. working out). You could say music is something that can save you. I bet it would save your sanity and help get you through when no one else is around but the zombies. Did you ever read or see The Stand? Larry the rock and roll guy still carried his guitar with him everywhere after the great plague. And I thought it was quite a nice scene when he stopped and just sat on the hood of a car on a highway and played guitar and sang his heart out alone surrounded by all the bodies of people caught in traffic before they died in their cars.

Not only does the idea of an apocalypse scare me, but the idea of surviving during one in a totally different representation of society does as well. As someone who uses computers for basically everything having to do with my career including creating music and sending digital files via the internet, this terrifies me. What would I do then for money? How will I survive if I don’t know how to do something like welding?

A good explanation of post-apocalyptic work and worth is in the incredible book World War Z by Max Brooks—NOT the movie, people. (The movie is terrible and unrelated to the book in any way except the title.) I highly recommend reading this immediately if you haven’t already. It’s a book about a zombie apocalypse, but it seems as though the author did research about how things operated before and after actual real wars to describe what might happen if zombies did start showing up, because it’s insanely scary and realistic.

There is a paragraph where there are some survivors trying to rebuild a community. And in this, they label people with letters and numbers as to what jobs they had before the apocalypse and how this deems their worth during it. For example, an “A1” means you were probably a lawyer or executive or something. You were someone who made a lot of money and had a high-paying job, were probably in charge of other people, and most likely worked at a desk or computer versus doing anything physical during the workday. An “F6” was a highly sought-after person that made a living such as a farmer or carpenter.

Think about it. What are you going to do during the apocalypse if you were previously a bassist or a film director? Assuming there is no power, you can’t even plug in some of the tools that you would use to create your art. What you do now could and probably will be totally useless then. When I start thinking about the apocalypse, I get really nervous because none of what I do will be useful whatsoever. I don’t have survival skills. I don’t know how to plant and do crop rotation. I’ve shot a gun, but I am not some expert marksman or anything. And I definitely don’t know how to make or fix anything using carpentry, masonry, plumbing or engineering. I do like to think I’d survive though using my wits, brute force and teamwork skills though, assuming I don’t get captured and eaten by crazy people.

What is the point of all of this? It’s just another perspective. It’s nice to know we live in a world now where we can work remotely, talk to people and share music and art across the globe instantaneously, and combine music and media in a way to entertain and hopefully enlighten or influence people all at the flip of a few switches. I love what I do, but after I finish the new season of “The Walking Dead” I think I’m going to check out some of those survivalist videos on Youtube. Just in case.