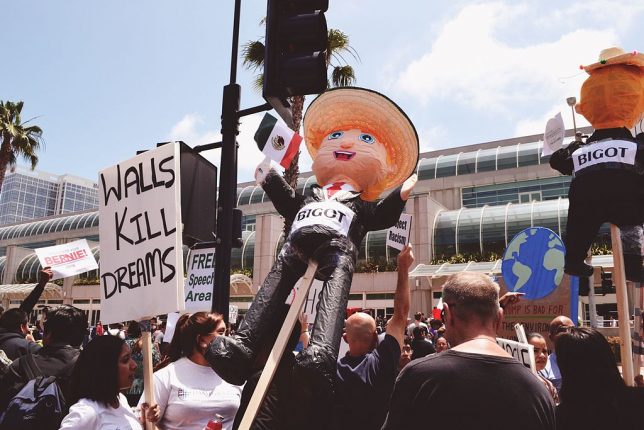 Photo by i threw a guitar at him.

My Election Night story is the same as many Americans, anxiousness turning slowly to dread, then a sort of paralytic aphasia as the outcome became horrifyingly clear. I crawled to my bed, clenched up, in what felt like a different country than the one I had woken up in. It wasn’t so much that what I believed in had been repudiated as that it felt as if it had been erased.

I had been raised in politics, not as an activist or organizer but as a part of the political class. I graduated from a top college armed with dual majors in Political Science and English and immediately made my way to DC in hopes of becoming a speechwriter. Politics was foundational to my identity in many ways, at least politics as it had existed until November 8, 2016, a date which now seems a point of demarcation, separating a previous reality from this unfamiliar and baleful present. I slept for maybe three hours that first night.

As a writer, I have a responsibility to act as a constant reminder that Trump’s world isn’t normal and can never be normal.

Around nine o’clock the next morning I slopped out of bed, down the stairs and into the kitchen, just as I did every morning but the world felt out phase, even familiar things felt wrong, like when you travel to some other city and everything is just a little off, Jeopardy is on at 7pm instead of 7:30 and Channel 4 is ABC when it should be CBS, and so forth. A sort of ambient dissonance. I couldn’t bear to read the paper and was barely able to go on Facebook, I couldn’t face what had happened and at that moment I genuinely felt like I might never be ready to face it.

The rest of my week was a conscious avoidance of the world. I binged season two of Mr. Robot. I watched old movies. I only read the arts and science sections of the paper and I avoided Facebook as much as a social media junkie can. I caromed through various states of mourning: rage then denial then back to rage then depression. And I watched my friends do the same, some bargained, others were abjectly depressed, others stewed in a sustained state of anger and so on. I wasn’t capable of much in those first few days, but I did do one significant thing: I reached back to writers I haven’t visited with in a long time for some guidance, Aleksander Solzhenitsyn and George Orwell.

So now we’re a couple weeks removed from the breaking of the seventh seal, I’ve had some time to think about exactly what my obligation is as a writer is in the Age of Trump. Solzhenitsyn and Orwell provide a useful template. Others will organize and protest, and I will do my part to contribute and show up when and where I can, but I think our first duty as artists is to make sure this new reality never becomes normalized. The press will abet Trump, intentionally and not, in creating an illusion of normal. Normalization is a devilishly subtle phenomena, the byproduct of banality, relativism and repetition. A quiet reconditioning of the mind.

As an example, the press will describe Steve Bannon in less and less incendiary terms, euphemizing over time out of a sort of linguistic fatigue and that euphemism will become reality, fact. As a writer, but not the press, I have a responsibility to act as a constant reminder that Trump’s world isn’t normal and can never be normal, the more the world at large slides into complacency the more urgent it becomes that I and my fellow artists remain vigilant, not allowing ourselves to succumb to even the slightest impulse to accept the new reality. Because to allow even a small sliver of what comes next to be acceptable would be to allow the darkness in and once that’s happens it becomes a matter of time before it subsumes and undermines us.

And then there’s the matter of Orwellian doublespeak. Political scientist Edward Herman described it this way:

“What is really important in the world of doublespeak is the ability to lie, whether knowingly or unconsciously, and to get away with it; and the ability to use lies and choose and shape facts selectively, blocking out those that don’t fit an agenda or program.”

Sound familiar? Trump is a master at manipulating language and, consequently, fact. Writers are, in a way, the custodians of words, caretakers tasked with preserving language and the ideas they heave into the world. All artists are protectors of truth, but in a time when even facts find themselves on treacherous footing it’s up to us to preserve the sanctity of words, to not let them be perverted in the service of a demagogue. Every doublespoken utterance needs to be met by the creative community with a forceful rejoinder, we must beat back the corrosiveness of Trumpspeak. It’s a peculiar irony that we artists are typically the subversives, and in many ways we need to be that more than ever before, but we simultaneously need to confront an administration hellbent on subverting progress through the methodical perversion of language and optics.

We’re only at the beginning now, and there will be much more to do in the years ahead, but I think we need to stake out a set of principles, like the ones I mentioned above, that will guide us and keep us on course. We need to say, this is who and what we are, this is what we stand for as artists, this is where we will not compromise. We’re in a unique position no American artists before have faced, to protect the ideals upon which the country, liberal democracy generally, were founded. And I think we’re up to the challenge.