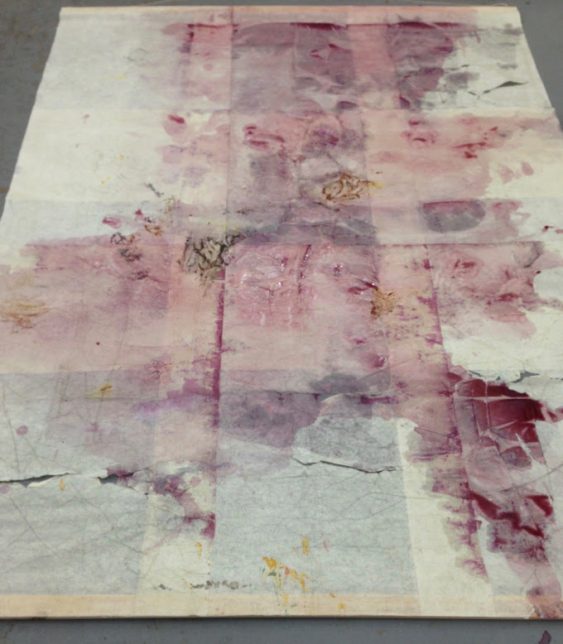 The weeks leading up to November 8 were restless. There was a great deal of disease at the possibility that a demagogue could win the election. How had he even gotten this far anyhow? Conversations went back and forth about the shared nerves and the reinforced need to believe that he could never win. Then election night came and as the map filled itself with one Red State after another, we held our breath and each other closer. As the evening grew darker and darker, I put my head on my dad’s shoulder and cried.

With the shock that we were now a TrumpAmerica, a country which had revealed itself as one filled with hate, misogyny, racism and xenophobia, I took the remainder of my wine bottle gone rancid and poured it over my pristine white “Comforter.” My white middle class comfort was no longer a privilege I could accept. Action had to be taken. I poured the remainder of the red wine on it and brushed it in the shape of the red states of our Country divided.

I poured the remainder of the red wine on my “Comforter” and brushed it in the shape of the red states of our Country divided.

The next morning I walked into my studio to the potent smell of a winery rather than a painting studio. I opened up all the windows to let the fresh air clear my head. A friend came over and we spoke of our mutual sadness and anger that we were now a TrumpWorld. We sat over our mugs of coffee and listened to the thoughtful words of encouragement from President Obama. Using this moment of optimism, together we poured coffee onto the “blood-red” stained sheet and swung it back and forth, merging the two together.

Later that night as the substances of wine and coffee wore off, I warmed some water with coco powder and brushed on the chocolate which completed my second queen sheet dimensioned “Comforter.” 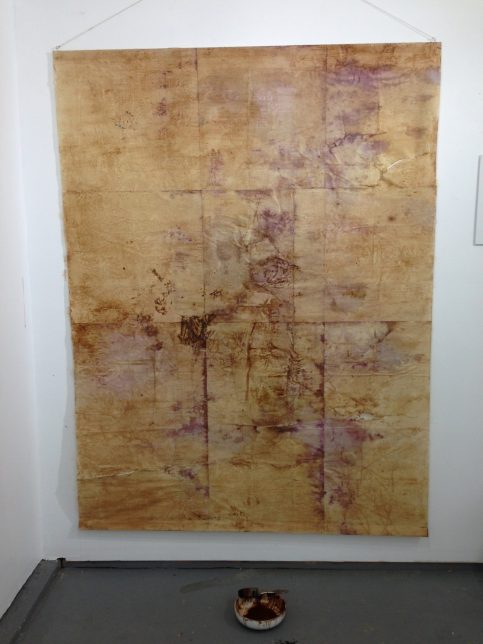 Now that it is done and we live in a TrumpWorld, it is time I question my social comforts and privileges and find a way to actively contribute to creating the change I want to see in the world. As a mother of two young children, I have the responsibility to fight for their future and the planet we all live on. As an artist, I have the opportunity to give voice to the all the women and girls who’s rights are even more at stake now. As a Buddhist, I have to come to terms with the energy of fear and to act with the integrity of love. As an American citizen, I have the obligation to speak out and protect those that are oppressed. The real work begins now.