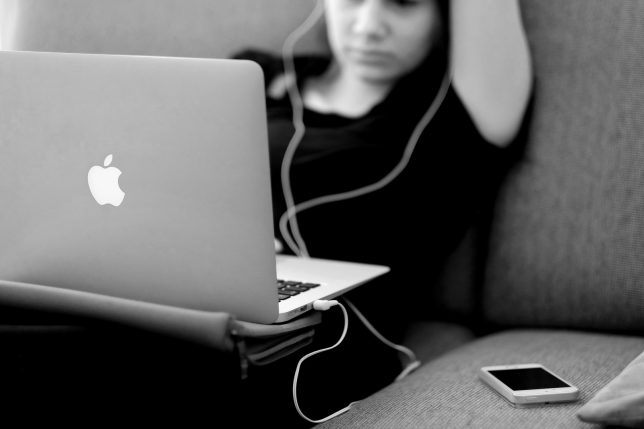 If you’re anything like me, then music is necessary background noise when working on a project. Working in complete silence bores me to tears, while the hustle and bustle of a coffee shop is sometimes much more distracting than even the worst—or perhaps best—Backstreet Boys songs. There’s something about music that helps me concentrate and focus on the task at hand without getting bored.

Sometimes, when my guard is let down, music seems to actually have an impact on the designs I’m creating. Whether I’m wireframing a website or sketching some logos, music is a big help.

The good news is that I’m not crazy (well regarding this, at least). Music does, in fact, have a powerful effect on our minds.

There’s a point to listening to music while working, aside from the stimulation that comes with beautiful sounds. When researchers have taken a close look at how our brain reacts to music, they have found that music affects our stress and anxiety levels for the better. The scope and intention of the studies vary, but in general, they found a positive psychological benefit.

Music can have a similar impact as a drug, but without the nasty side effects. Music that appeals to us releases dopamine into our brains, which gives us a hit of pleasure. In a sense, it’s like a coffee without the caffeine addiction or a sweet snack without the calories.

Even people who claim to have wildly different musical tastes can enjoy the positive effects of certain types of music. I find myself listening to all types of music when working—even music I would never listen to otherwise. Each type of music seems to have its own effect on me. For that reason, I don’t let iTunes play random music from my far-too-large library. Instead, I pick the music for the task at hand and then get to work.

Here’s a rundown of how certain genres work, or don’t work, for me when I’m working.

It’s something of a cliché to listen to classical music when working on something creative. In movies, it’s the stereotypical sign of a genius about to have their eureka moment. For me, it’s not nearly as impactful. However, I feel like it does inspire me to be more creative than I normally am.

There’s phenomena called the “Mozart Effect” where listening to the music of the genius composer gives us a short-term mental improvement. It’s a popular theory that received a lot of attention, but follow-up studies indicated a less dramatic impact—if any at all—than originally thought.

I’m okay with knowing that classical music might not make me any smarter than I was before. However, it’s definitely soothing in the moment and helps me with my work. Mozart doesn’t really do it for me, as some of his works can be a bit bombastic or depressing. Instead, Chopin’s nocturnes are where it’s at.

A lot of musical snobs look down on pop music. While the music isn’t as particularly soothing or “educational” as classical music is, it puts me in a positive frame of mind. I’m not embarrassed to admit that I absolutely love pop music, whether it’s the cheesy boy bands of the ’90s or the club-friendly stuff common nowadays.

When I find myself stuck on a particular design and unsure how to proceed, harmless pop music puts my mind at ease. Apparently I’m not alone. According to one survey, 65% of business owners believe music makes their employees more productive.

Most pop music seems to say, “Things aren’t too bad.” That’s a great reminder when struggling at work.

Pop music is great at putting me in a good mood, but sometimes I need something a little more involved. Flipping to one of the classic rock stations on the radio helps me clear my mind. It’s like a palate cleanser when I’ve been working too long.

Obviously, there are lots of different types of classic rock out there and some are less conducive to the design process than others. The good news is that every classic rock station throughout the country seems to play the exact same 100 songs, so I don’t have to worry about finding something special.

I wouldn’t consider myself a fan of heavy metal (I barely wear black clothing, for example), yet I’m a big believer in the power of it. That aggressive music, with lots of screaming and intense guitar solos, is sometimes just perfect. While I don’t listen to it often, I find it very useful when I’m slogging through mindless rote work that needs to be done.

These tasks, which typically involving inputting data of some sort or copying numerous elements onto related designs, go a lot better with heavy metal music. Instead of being bored, I feel a little pumped up. The music would be distracting for the creative process, yet it works perfectly during the dull moments. Some of my go-to bands include Dragonforce and Blind Guardian. Just, uh, be prepared and turn down your volume when listening to them for the first time.

Make Music Work for You

Some people find any sort of music too distracting. That’s totally fine, and I get it. However, if you’re looking for a little creative boost while designing, experiment with different types of music. At the very least, the right kind of classical music can put your mind at ease while making you feel smarter. Isn’t feeling smarter about just as good as being smarter?

Lexie Lu is a freelance UX designer and blogger. She enjoys researching the latest design trends and always has a cup of coffee nearby. She manages Design Roast and can be followed on Twitter @lexieludesigner.

View all posts by Lexie Lu →