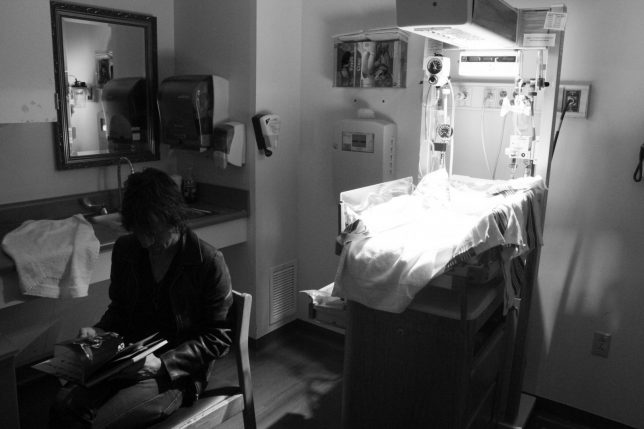 Almost a rock dad, waiting at the hospital for baby to arrive. Photo by Kimberly Murphey.

About six months into my wife’s pregnancy, I started to feel a sea change in my consciousness and sense of self: I began to feel unmoored, like some other force had taken the reigns and the trajectory of my life was now out of my hands, the direction unknown to me. This proved to be mostly true when my son was born—I felt like I did not know who I was anymore. The experience was overwhelming in the truest sense of the word; I did not know how to process this event, compartmentalize it in my mind and get on with my life. It was too important, too consequential to handle like I handled everything else. My own existence suddenly seemed insignificant and without meaning. I mean that in a positive way, as I think anything that makes one feel small and insignificant is a blessing, an ego check; it still, however, came as a shock, a blow.

And who I was (and am) is a rock musician. This identity that I constructed is mainly what got shaken up by my becoming a father. I’ve always felt that there is something essentially adolescent about rock and roll—it is the soundtrack to teenage sex, drug experimentation, and above all telling parents, teachers and other authority figures they can’t tell you what to do. This is what, I think, accounts for its perennial and universal appeal; It makes adolescents feel like they have power and autonomy over their lives and it makes adults feel like carefree teenagers.

Rock and roll is juvenile, but what I realized is that I didn’t have to be.

That’s all fine and great, but as an expectant father I was now burdened with a very serious and very real adult responsibility, after having spent my entire adult life running like hell from anything that remotely resembled responsibility. Not that I was living like some kind of Johnny Thunders wannabe; I was already married, and my partying had been slowing down for a few years anyway as I was starting to keep an eye on my health. The prospect of fatherhood wasn’t a “get your shit together” moment for me—I was already in the process of doing that. It was much deeper, much more profoundly, existentially unsettling: I did not believe in, want to play or want to listen to rock and roll anymore.

This is the realization that began to dawn on me in the weeks after my son was born. What’s more, I began to judge the effects and accoutrements of the music and the lifestyle, the very things I had used to fashion my identity, as little more than childish frivolity. I cut off my Keith Richards rat’s nest hairdo and replaced it with the shortest haircut I’ve had since I was in high school—high and tight. I wore long sleeves to cover my tattoos. And I stopped listening to rock music.

I still played it, because it was my job—no gigs, no money. And I think they were good shows. I’m a performer, after all, and thus I’m reasonably capable of pulling off the sad (or disinterested) clown. But that was the extent of my engagement with rock music. My wife went back to work eight weeks after she gave birth, and from then on it was just my infant son and me at home, all day every day. We listened to Bach, Mozart, Vivaldi, Satie, Coltrane and Monk, and he crawled around while I read books on Picasso, Van Gogh, Proust and French philosophy.

I didn’t want to listen to rock music, and I didn’t want my son to listen to it either. It just seemed dumb and trivial to me. And I hated (and still hate) all that silly “rock’n’roll dad” cliche bullshit—shirts that say “daddy is a rockstar,” that sort of thing. Not only did I think rock and roll foolish and immature, but I felt as if somehow I had let my son down by being a wastrel for all of my adult life instead of preparing for proper fatherhood. I still was attracted to making art and writing, but in ways that seemed to me more “grown up” and “sophisticated.” For some reason writers seemed more mature and respectable, so I thought more and more about making the transition to writer (one of the results of that refashioning of my identity was my beginning to write for this magazine). At least writers look more respectable. Usually.

And time went on. My band booked studio time with a producer we’d been hoping to work with, so I figured I had to get right with the gods of rock and roll if I was still going to do the damn thing. Rock music started to creep back into my life. The first guitar-based music I could listen to was some old favorites, Muddy Waters and Lightnin’ Hopkins. My five-month-old son responded dramatically and dug the hell out of these guys, which was encouraging. I was letting my hair shag out, and started wearing short sleeves once in a while. As more and more time passed and being a father seemed less new to me, I just got used to it, and the idea that there was some lofty ideal to live up to or that fatherhood entailed some objectively-defined role to conform to just kind of faded away. I became a little more comfortable in my own skin, as if I could be myself and handle the task of being a father, that I could do it my way. And by being “myself,” I mean unapologetically donning the identity I created and have been refining for 20 years, that is, rock musician. It’s a persona, to be sure; but as Richard Hell has said, “If you wear a mask long enough, it becomes your face.”

After we made the record, it was like I never left—by the time we got the record out and started touring, I was back. Something about really immersing myself in the process of record-making, doing all the stuff leading up to a release (negotiating contracts, distribution, publicity, press, booking tours, etc.), and then touring, all while being in my first year and a half of fatherhood, kind of legitimized being a rock musician for me. Made it seem like work, in a positive way—something that you do to justify the space you take up on Earth. Not traditional work, sure, the uniform can be ostentatious and the hours are vampiric, but work nonetheless. Rock and roll is juvenile, but what I realized is that I didn’t have to be. I think it’s all about intent. Ultimately, I don’t think what Bob Dylan does or Lou Reed did is that different from what Garcia Lorca or Picasso was doing, and I don’t think they did it for different reasons; it’s just packaged differently. I fell for the packaging as a kid, but what was inside is what has kept my interest in it, both listening to it and making it.

And my son and I still often listen to Bach’s Cello Suites, but this morning we played basketball in the kitchen while listening to the Flesh Eaters’ Forever Came Today at maximum volume. Sometimes loud-ass guitars and fast drums are exactly what you need, no matter how old you are.