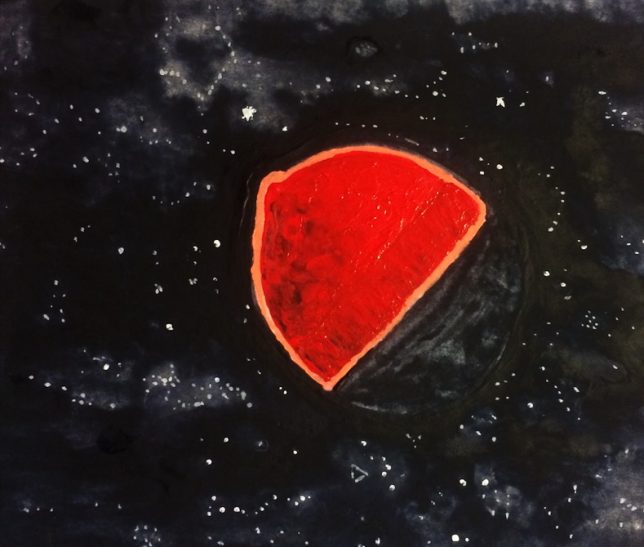 Crying, like sex or doing laundry, is not an activity I’m in the habit of keeping track of unless it has been way too long since I’ve done it.

What you would expect to be a watershed season — for most of us, really — was in my case augmented by rejection letters, botched job interviews, writer’s block, and the death of a beloved uncle. The stuff of tears. Crying is the body’s natural catharsis, releasing stress toxins and producing pain-killing endorphins. So it was not for lack of trying that kept the tears from flowing. Lord knows I could use the free high.

There has been no shortage of wreckage at our feet from this past year.

But perhaps due to overexposure, the proper valves had been siphoned off, and thus any attempt to reel in inspiration or anchor myself with a poem had to contend with the excess of saltwater soggying up my brain. The paper in front of me remained Sahara dry.

Luckily, a friend threw me a life preserver.

I was in the middle of cleaning my room and resigning myself to a grey Sunday spent indoors when my friend Sonja called asking if I’d like to go see Seu Jorge with her at ACL Live. He was playing a tribute show to David Bowie, reprising his covers from Wes Anderson’s The Life Aquatic with Steve Zissou. As it just so happened, I had watched the film the night before for the twentieth or so time, more or less leaving it on in the background for company, and told her as much. Did I mention this woman is my soul sister? Anyway, the answer was absolutely, yes.

Unbeknownst to us (and after climbing needless flights of stairs), we realized we had miraculously scored fifth row seats. A quick survey of the three-tiered venue told me that this show was everyone else’s idea of the perfect date. I looked over at Sonja in her crepe jungle-print dress and gave her arm a little squeeze. Then the lights went black.

The Brazilian musician came out in full Zissou gear: a baby blue nautical uniform accented by the famous red beanie, like a maraschino cherry atop his head. Jorge was charming; self-effacing about his not-quite-broken English, telling winsome little anecdotes about being on set and playing his covers with captivating simplicity. Then he told us that the news of Bowie’s death came days before his own father’s passing. It felt intimate and I was moved, and I could certainly relate to the pervading sense of loss. Still, there I sat, drolly sipping my overpriced thimble of red wine and fumbling in dark for my chapstick. My lips were dry.

Then it happened. Like a wave crashing over me, the notes of “Life on Mars” commenced, foreign in tongue but achingly familiar in feeling. And I’ll confess: it wasn’t grief over Bowie’s death, or Jorge’s story, or even my own personal turmoil that suddenly surfaced and started pouring out of me. I was blubbering to be sure, open-faced, mascara streaming, audibly enough for Sonja to look over at me with pity and give me a reassuring, if somewhat bewildered, pat. I kept looking at my lap when I really should have been looking up. Because “up” is what I was mourning. I hadn’t seen it in so long.

There has been no shortage of wreckage at our feet from this past year and we’ll have to clean it up. There is no getting around that. But kindly, there is a rope ladder to ascend. Maybe you look up at those who have done it before you. Maybe an homage is a love poem that lets your own voice rise. It’s worth a try. Because no one can tell you’re crying when you’re underwater.