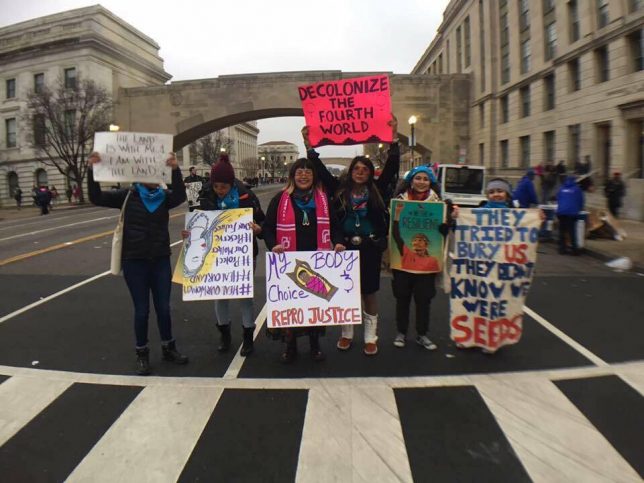 I had the honor of attending the Women’s March on Washington on January 21, and I’m thankful for the experience. It has been a LOT to process. Lot of pros, PLENTY of cons.

On Saturday morning, I met up with the indigenous group that came in with the Albuquerque group via a 30-hour bus ride. We made our way to the march grounds on the national mall, and it was already getting pretty crowded with pink hats by 7:30 in the morning. We met up with Indigenous Women Rise, the women’s march-within-a-march, led by amazing indigenous activists, scholars, and educators.

As the national mall started to get progressively PACKED, we managed to hold a large solid circle in front of the National Museum of the American Indian. The prayer started around 9am. We sent prayer smoke up and thanked the Creator for bringing us all together; we prayed for unity, understanding, strength and wisdom. Our prayer circle was beautiful. We honored our elders, recognized those who spend their lives fighting for our indigenous women, and heard from youth that were there to empower their communities. Some women offered their dance as prayer, and as they honored the eagle through dance, one circled a few hundred feet above in silent observation.

I was there to represent and stand for my people, NOT for viewing pleasure or open to be tokenized.

We held hands and did social dancing in a circle, further fortifying our bond and our prayer. We heard from indigenous community activists who articulated why we were there: to empower our self-identified women, to raise awareness to our specific issues, to protect the earth, and to end the tyranny that is the new administration. It was beautiful. I felt so strong and empowered by being with these amazing indigenous people. I felt our chants and songs of resistance go up into the world as one.

Once we left the circle, the feeling became…well, icky and angering. Women in pink hats ooh’d and aah’d at our presence as we navigated our group through the sardine-packed crowd. I and other women in traditional regalia such as feathers and prayer dresses continuously had cameras shoved in our faces. Some women were considerate enough to ask to take a picture, but immediately huffed up when we politely declined, not even wanting to hear my reason why—that I was there to represent and stand for my people, NOT for viewing pleasure or open to be tokenized.

We would be walking and then feel hands on our bodies while they fawned over the sight of us. Thank you for your compliments, but how dare you? These same women who begged us to sing for them or take our pictures refused to hear us. They refused to take fliers with information on environmental dangers, refused to hear our cries for justice for our stolen sisters, refused to hear about sexual assault on our women. Women who found themselves marching with us joked about “being Indian for a day” and then got angry when we asked them to leave because of their disrespect.

What I want readers to take away from this is that I believe that we need to make sure that we are all constantly learning. It is crucial to successful resistance of the new regime. Do not be complacent. Do not look at your problem with America though blinders. Take time to understand why someone is angry or “protesting” (I hate that word). Maybe it’s something that you’ve never even thought about. Trans folx, immigrant women, indigenous women, a PLETHORA of other walks—we all have something we’re fighting for.

Maybe you’ll be angry and shocked because you’re told that your attitude is part of the problem (stubbornness, complacency, excluding marginalized groups). Please, stop and learn. For me, as a Diné woman, I marched for my indigenous sisters who are sexually assaulted and raped at a higher rate than any other group, for missing and murdered indigenous women who receive no justice, for my aunties, my grandmas, my sisters, my children. For my Mother Earth who is being raped by corporations via fracking, mining, drilling—all for profit that we will never see. Without listening to me, how would other marchers know that? Or were the women gawking at us more interested in seeing me as a highlight of their trip like a living statue or a clever menu chalk board?

Please, encourage each other to listen to people of color and other marginalized groups. I was never like how I am now; I was once complacent and pretty colonized in mindset, and subscribed to roles of western society. But once I started exercising empathy over sympathy by learning more about the world around me, it started to click.

Learn more about marginalized groups, Chicano history, the NEVER-ENDING struggle of the American Indian—please! Modern feminism must include the world around us or else we’ll all sink and some of us will get left behind.

Liz McKenzie is a Diné woman dedicated to strengthening and enriching the indigenous and Albuquerque community that surrounds her through love, action, education, and prayer.

View all posts by Liz McKenzie →