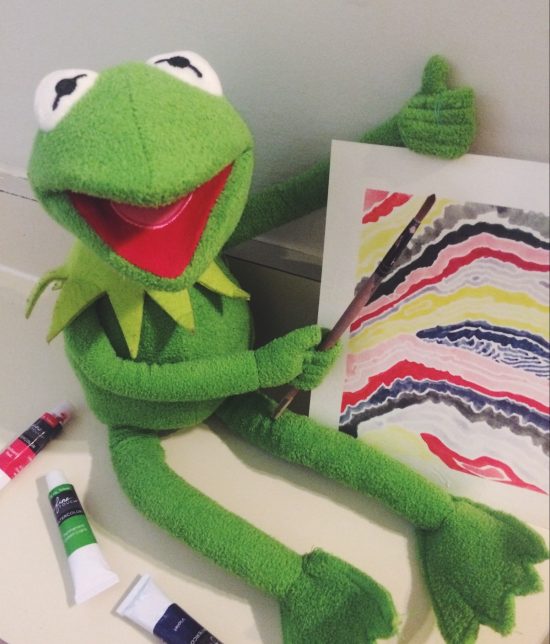 “We live increasingly in a time where soft-headed descriptions of anxiety are marketable, and cheerfully consumed.”
—Harold Bloom, “The Anxiety of Influence: A Theory of Poetry”

Consider the meme: an easily recognizable and sharable hieroglyph of today’s culture. It is everywhere, and spreads through all channels of our social interactions. Funny, relatable, they provide a context through which formerly taboo subjects are normalized, such as mental illness and unhealthy dating patterns.

I’m not here to question the merit of this (fairly) new and ubiquitous medium. Social media, like the English language itself, is a constantly evolving life form. Its inevitability seems beyond criticism. But what does it mean for the artist, the poet, the writer, who perhaps flail when juxtaposed against such easily consumed material? How does it affect one who puts out original content (bares one’s soul) only to be scrolled over for the latest incarnation of Kermit? It can sting. But it’s also not a new problem. A meme is perhaps the most efficient example of what Harold Bloom calls “the anxiety of influence”: a copy of a copy that gleefully embraces its redundancy. In fact, it thrives off of it.

But the man has a point. Choices are the thing. Maybe the only thing worth noting.

A riddle: What is the point of doing something that someone else has already done before, probably better than you could ever possibly do it?

I’m tempted to say that the point is no one has ever done it your way. That your way is inherently valuable because it has its own distinct time and place and flavor. That the world needs more innovators and original thinkers and such-and-such like you (I hope by now you’ve had the good sense to replace these italics with me, because really, who the hell am I to presume anything about you?). That maybe, just maybe, you could come along and reinvent the wheel.

Well I’ve got news for us: That’s not going to happen. Whatever misgivings we may have, the truth is, all that is ever going to happen has already happened. History repeats itself. But we must beat on, boats against the current…oh, there I go again. I might as well stop while I’m behind them.

I recently brought up this debilitating dilemma to an artist friend of mine, one of the select few I consider to be on the “up-and-up.” In fact, this friend of mine is brilliant in her own right: astutely empathetic, wise, and vivacious as fuck.  Anyway, I asked her, what is the point of trying anything, really, if it’s all been done before?

“When I was a young girl, my mother told me,” she expounds knowingly, “that there will always be someone prettier than you, smarter than you….”

Yeah, I think, I’ve heard that before too!

This is about where we both trail off, light another cigarette, and forget what the point was. That’s what several margaritas in the daytime will do to you. Oh! The point is: There is no point. None whatsoever. And this is good news. Because after a few cups of coffee, I troubled my brother, a brilliant, vibrant philosopher as congenial as he is knowledgeable.

“Dear brother” (I implored formally, as only the drunk and ridiculous might ) “Dear learn’d relation of mine: What good is doing shit that other people have done better than me?” Leaning droopily on our laminate countertop, I number my confusions:

1) I have such feelings, but I realize that they are just feelings, they don’t belong to me, they pass.

2) I lament that I have these thoughts, such thoughts, but I realize I am only witness to them. They occur to me, but evade me nonetheless. So what then, is mine?

My brother, in his lion-maned wisdom, replies, “Your choices. Thoughts and feelings may pass like so many clouds, but one thing remains: It is you. You are the backdrop—the sky.”

I’m paraphrasing here his paraphrasing, which, despite his doubtless genius, is a recantation of another, probably French-ier genius. But the man has a point. Choices are the thing. Maybe the only thing worth noting. After all, had he not chosen to read whoever first came up with the sky/human metaphor a hundred years ago (who probably stole it from a rival prettier and smarter than himself), then he wouldn’t know what to say to console his annoyingly pensive, drunken sister. But he did. And that matters.

Why? My god, you are relentless. Because what other choice do you have? As artists, we live to express ourselves. There is no other way. It is a madness, a curse, a blessing. As inevitable as Kermit in a cape, egging you on: Do, you must.