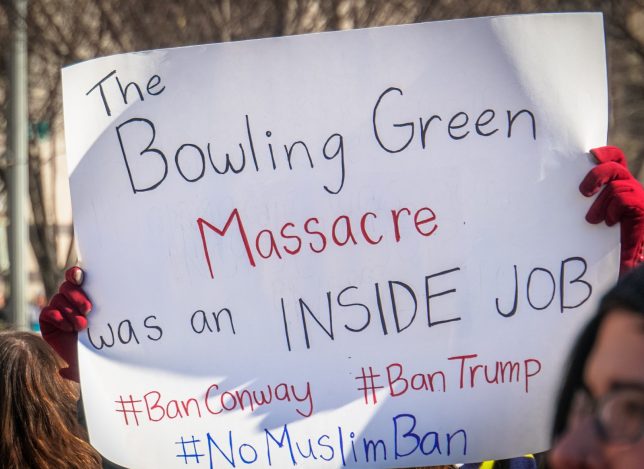 You have written that, “[F]acts are not protected [under copyright law] even if the author spends considerable time and effort discovering things that were previously unknown.” In this era of fake news, I wondered whether the same holds true for “alternative facts.” Just curious.

Seeing as how our mailbag is a little thin this week, the Dear Rich staff is going to wade into this potentially partisan, largely theoretical question.

What are facts and why aren’t they protected?

According to Merriam Webster, a fact is “something that truly exists or happens: something that has actual existence.” According to the U.S. Supreme Court, facts are neither original nor created—they are discovered or unearthed (“[T]he first person to find and report a particular fact has not created the fact; he or she has merely discovered its existence…. [O]ne who discovers a fact is not its “maker” or “originator.”). Therefore, copyright law—which only protects original creations—will not protect facts. (The Supreme Court viewed facts in their traditional legal context, as statements of objective truth, a view that some legal scholars considered simplistic and flawed.)

What are alternative facts?

The term “alternative facts” was popularized by Kellyanne Conway, counselor to the president, in her defense of false statements regarding the size of inauguration crowds. Alternative facts have come to be known as demonstrable falsehoods (or lies) and they are considered a threat to unbiased knowledge. Some of Conway’s defenders have categorized alternative facts as “truthful hyperbole” and others claim the term has a legal meaning, likening it to alternative pleadings. (Partisan proponents quickly constructed a competing Wikipedia entry prefaced with so many disclaimers and warnings that the definition, itself, seems to have become an alternative fact.)

Harry Potter and Seinfeld have something in common: They both exist in a universe built upon “created facts.” For example, the “fact” that in a Seinfeld episode, Kramer is hypnotized by baggage carousels “is in reality [a] fictitious expression created by Seinfeld’s authors.” Similarly, “each [Harry Potter] book chronicles and expands on the fictional facts that unfold in the series,” and when a number of these fictional facts are borrowed, a court will deem it infringement. Like Vandelay Industries and the Bond of Blood charm, alternative facts (i.e. massive voter fraud in New Hampshire) are created facts, not discovered, and therefore demonstrate the minimum of originality.

A 1990 case held that the intent of the creator determines whether a fact is protected. An author named Nash had written a book documenting his theory that John Dillinger survived his 1934 shootout and lived until 1979. A TV show had used the theory as part of its plot. The court ruled that because Nash treated his book as factual, not fiction, his facts were unprotected. (“Nash does not portray [his book] as fiction, however, which makes all the difference.”) Following this ruling, alternative facts would not be copyrightable.

Not so fast, Kellyanne.

Regardless of the arguments, above, there remain a few obstacles to copyright protection. First, there is the matter of attribution: Who is the author for copyright purposes? If the author is a federal employee, the work falls in the public domain. At the same time, the brevity of “alternative facts” creates a roadblock for copyright protection. Finally, there is the unlikelihood of enforcement—that is, it is doubtful that reproduction of falsehoods will lead to copyright lawsuits unless, perhaps, a compilation of alternative facts was published.