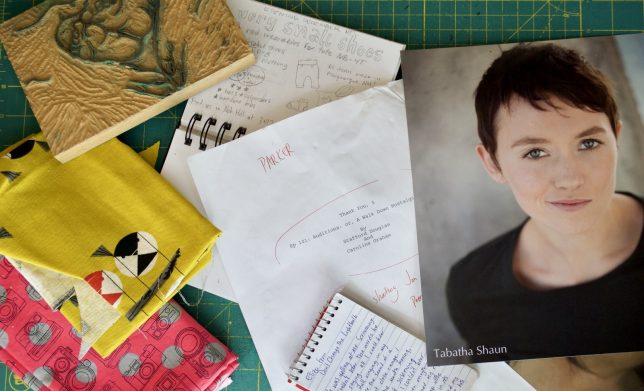 I cut off all of my hair. Also, I opened a storefront.

I planted seeds of fear of the chop and the shop several years ago, both bound to my acting career. Would I be marketable as a female actor with short hair? Would I be viewed as an actor by my community if I owned a business? My perception of my perception rooted me in place, unable to take myself to a hair salon, unable to commit to my self-created side job. I can say this repeatedly with different words, different phrasing, and still not fully grasp it because while I’ve finally executed both actions, the fear remains.

I delved into the repulsion of myself a couple winters ago. See all these “I,” “me,” “my”-s? That’s part of the disgust. Yet, here I am, an individual who I guess is special, with only me living my life, which is the life of an actor/seamstress/parent lucky enough to have met my partner, who was once a struggling grad student but now runs a creepy and awesome orthopedic research lab (think cadavers) at UNMH so I can work on cutting and pasting my life together.

There’s a saying you’ll hear all over the arts world that goes, “If you like anything else, do that instead.”

Last year, I struggled with my “crafty white bitch” identity, which still pings in my brain when I meet other white women who are doing, I imagine, exactly what I do. They’re seeing my dry hands pushing fabric through their sewing machines, seeing my face in the mirror. They’re all me. Thank god I have a tearaway Mr. Rogers calendar with quotes reminding me that there’s actually only one me ever. Feeling unoriginal is even unoriginal.

Simultaneously, I ripped at my “pretty white girl” actor identity. I grew a tiny fan club from The Guest, unsurprisingly all men. I had a director pen pal and then dissolved it because he praised me too much, from my talent to my looks to my voice. He called me self-sabotaging, which maybe is the truth. It’s what happens when you have a little flock of sheep in your heart bleating, “You’re not good enough; you don’t deserve anything,” whether it’s getting a callback or creating a custom shoe order or even cooking a proper over-medium egg on cast iron.

Since 2014, when The Guest released, I’ve worked on three sets. The first was for the AMC series “Preacher” where I got to hop on set for two episodes. Next came “Godless” where a director praised me as the “most singular actress” he’s worked with, for a little diner conversation I had with Scoot McNairy. Then “Thank You, 5,” a web series about community theater where I play a grad student intending to psychoanalyze the company. I just can’t fucking believe how few projects I’ve been cast in, yet, I can.

There’s a saying you’ll hear all over the arts world that goes, “If you like anything else, do that instead.” It can mean whatever you want it to. For me, it meant, “If you do something else, it’s because you failed at acting.” It meant that as long as I had a day job I struggled with, I’d still be an actor. It meant that as long as I was a professional auditioner, with a booth at a farmers’ market and erratic work hours, as long as I still looked how my agent recommended I look, I’d still be an actor. Just after my 28th birthday, I started thinking, “If I already hate myself, why do I need to also hate my life?”

This haircut and the Very Small Shoes shop are my shameful acknowledgement of caring about my appearance and perception, and they are a transitional point for diminishing their power. My wife Christina gifted me a pair of Gryffindor pajama pants for Christmas, which I wear six days out of the week to remind me that somewhere inside I really am a brave person. My siblings said I remind them of Newt Scamander and Dr. Who, which resonates well. I’ve held onto a pretty, flirty girl image for years because it made marketability sense as a young female in the film industry. But I’m only pretty until my mouth opens, and then I’m just a weird, smart person, spilling out indecencies and championing gender-free kids clothing, fingers freshly wounded from rotary cutters and straight-pin accidents, my kid standing on the counter farting and strumming her ukulele while I memorize lines for my next audition like, “Is that blood?” 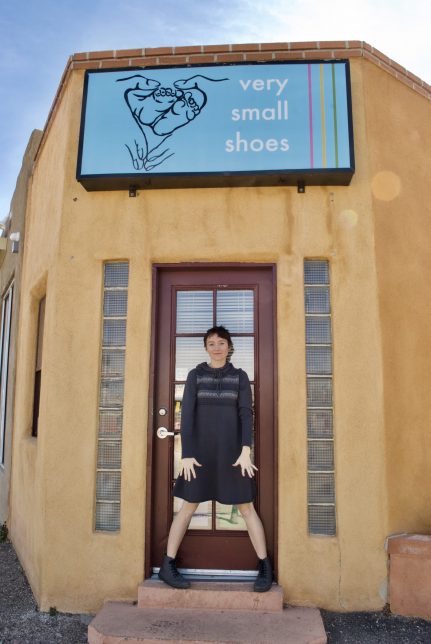