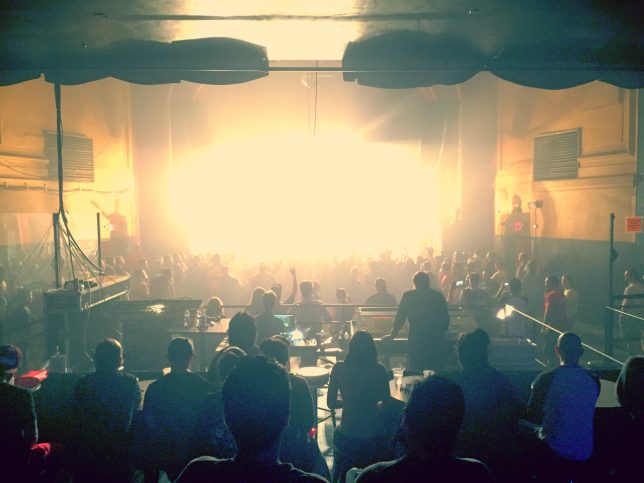 A friend had this experience recently, and I felt the need to write about our discussion. To be honest, I haven’t lived through this scenario yet, but I hope that, if/when I do, I’ll live up to my beliefs and act accordingly. If you have had experience with this, I welcome your comments and responses below.

Say you’re playing a gig somewhere on tour. It’s your first time in the area, first time at this venue, and you don’t know what to expect, but you’re hoping for the best. You hope that the venue draws a crowd, you hope that the prospect of live, original music excites some people…or at least, you’re hoping to make enough money to make it to the next tour stop.

And then, while you’re onstage, someone walks in with an insignia on their T-shirt that makes your stomach turn. Just a little bit.

Passive-aggressive tactics may be easy fixes, but we can be better than that.

Maybe it’s a white separatist flag, like the one for Northwest Front. Or maybe it’s a cartoon frog. Or maybe it’s some other image associated with hatred and bigotry. Maybe it’s just a regular old red hat. In any case, using terms from Dungeons and Dragons, you might have someone with a “chaotic evil” political alignment in your audience. And your conscience compels you to act.

But! Your brain tries to think of alternative scenarios. Maybe they confused the NWF flag with the peaceful Cascadia flag! Or maybe they’re just really big fans of the comic Boy’s Club and are completely out of touch with modern online neo-fascist symbolism. Or maybe they voted for a candidate because of economic reasons, and thought all of that dangerous race-baiting behavior was just campaign trail nonsense. These may be rationalizations, but you can’t convince yourself that they’re impossible.

So, you’ve got a decision to make: What do you do? Here are some options.

As I’ve written before, and as others have written before me, silence is not an option if you truly believe in justice and equality. If you see oppression (or clear support of oppression) and you don’t act, you’re aiding and abetting the oppressor. Even if you feel uncomfortable, if you feel that you’re alone on the road and don’t have enough support, if you feel too vulnerable to act, let me assure you that there are other options. I promise. You don’t necessarily have to punch a neo-Nazi, but you don’t have to suffer their presence, either.

Staying silent is a way of obeying the rules and protecting yourself while doing nothing to address the bigotry on display in front of you. Every day that a bigot thinks they can get away with their hatred in public is another day they can influence others to their way of thinking.

Step up. Be brave. Act in accordance with your values. I believe in you.

“Maybe I should directly address them” (Alignment: Chaotic good)

Instead of silence, you could directly call them out.

Not everybody will feel safe doing this, but if you think the venue would have your back, and if you think you could hold your own against this person, and if you’re confident that this person is earnest in their bigotry, then this is the option for you.

This is also the option most likely to have the greatest success (person is forced to interrogate their own beliefs or departs), but it could also lead to the greatest chaos (an escalation towards physical violence). It’s a gamble, because you don’t know the subject of your confrontation. Maybe they’re a deeply troubled person who is spoiling for a fight, or maybe they’re a deeply troubled person who’s been led astray by manipulative hate-mongers.

“Maybe I should discreetly ask the staff to remove them” (Alignment: Lawful evil)

This might occur to you as an easy option to deal with the situation, but it’s not a complete strategy. Sure, you’re passing the problem onto the staff, who have a lot to deal with already and that might make you feel guilty. But a reminder: it’s a venue staff’s job to deal with disruptive patrons. And a person who goes out in public wearing a symbol of bigotry is looking to disrupt the world around them, to make others feel unsafe. That behavior should not be tolerated.

But this is a two part solution: if you get them removed, you have to address to your audience on the subject (see below). And that can be a little scary…but if you want to fight bigotry, but can’t stand up and do it publicly, then maybe you should question why you are so reluctant. And then work on that part of yourself.

Do you not feel confident enough in your knowledge of civil rights and social justice? Then study up. Get confident. Read up on the civil rights classics, as well as the new movements. Do your research. You’ll probably find some stuff that you disagree with, stuff that offends you, stuff that angers you, stuff that conflicts with the way you see the world. That’s fine. Continue to get informed, read critically, and be prepared to act publicly if you need to.

“Maybe I should speak my mind” (Alignment: Lawful good)

You should definitely speak your mind, regardless. Maybe they flat out refuse to remove the offender. And as previously stated, if they do remove the offender you should affirm to the remaining audience that this is a safe space for people to enjoy each others company and to experience your music, but genocidal politics don’t get a seat at the table.

Depending on the scenario, the target of your speech might still be present. If you directly confront a patron, the venue might take issue with your behavior. But can a venue justifiably give you shit for saying something like “I think all genders, races, sexualities and peoples should be treated fairly under the law?” That’s a pretty benign statement, but it’s likely to discomfort someone with a bigoted mindset. If the offender reacts defensively, that’s on them.

It’s also telling that, today, such a statement can reasonably expect an angry response. At least, on Twitter.

Discomforting a bigot is what we want to do, at the very least. We want them to feel ashamed sharing their views in public. We want them to question that discomforting feeling, and hopefully someday cure themselves of the beliefs that cause white supremacy to flourish and spread.

And if they refuse to change, they can get the fuck out and leave the rest of us to our lives and our work.