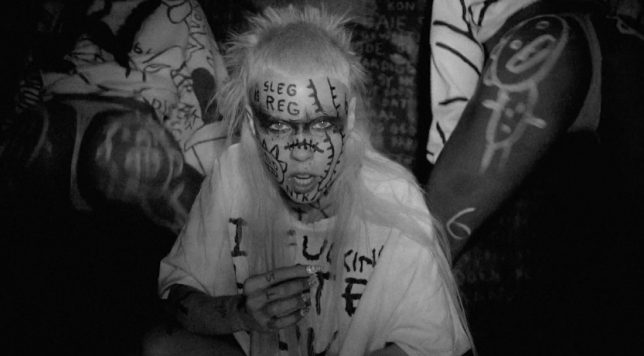 I’m rarely disappointed by the South African group Die Antwoord‘s music videos. I find myself gravitating toward their bizarre and often uneasy images, and I appreciate their various references to art-house and horror film, Afrikaans culture and politics. From covering Goran Bregović’s “Pitbull Terrier” from the film Black Cat White Cat, to Antwoord’s “Evil Boy,” a song that rejects the idea that you’re evil if you refuse a male circumcision in the Xhosa tribe, there is always something interesting.

Directed by Die Antwoord front-woman Yo-Landi Vi$$er, “Fat Faded F*ck Face” pays homage to booty-rap videos of the 2000s. In contrast however, Vi$$er doesn’t just sexualize the female body, but appears also to celebrate it. Nudity and the illustrations painted onto women’s bodies seem to reject taboos against sex and the female body. In the end though, this video fits well within American hip hop conventions.

Everything in the video is beautifully stark and punctuated.

The song’s lyrics follow the long tradition of smack talkers and lyrical braggarts, touching on important issues like partying, hangovers, haters and stupid fans. Just some of the classics, really. The black-and-white, graffiti-saturated images in the video work with this style well. Everything in the video is beautifully stark and punctuated by juxtaposing images that mesh with the pulsing southern-rap-influenced beats and bass.

What makes this video especially sharp is the lighting and the discontinuous feeling of the editing: The images create a feeling of awkwardness since they are often quite opposite of the lyrics. The Antwoord-style pajamas and onesies as costumes create a playful quality as you’re subjected to some of the more awkward images. Like their other videos, you can tell they’re having a good time, but there is no doubt that there’s something subversive about the song and video as a whole.