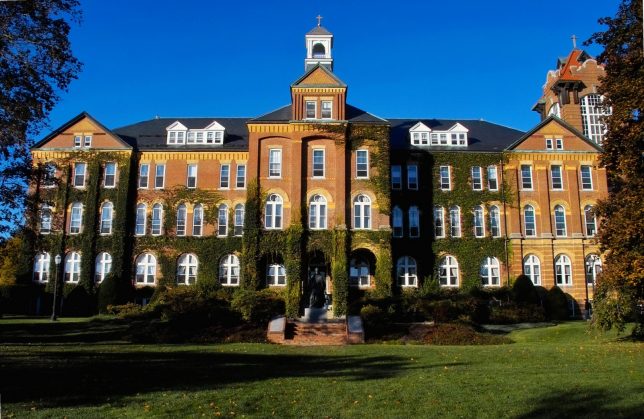 Flash back to a college campus in the early 2000s. A liberal arts college. There’s an outdoor courtyard with a neglected but well-loved fountain at its center and geometric sculptures scattered among the lecture halls.

A freshman lecture class adjourns and the courtyard fills with students wearing messenger bags, trucker hats, and shutter shades. The kids beneath these embarrassingly iconic accessories plod across campus, weaving between slack lines and performance art installations. There’s something else about them too. They aren’t all on their cell phones. It’s not that mobile technology isn’t a thing yet—we haven’t traveled back that far in time—but rather, the arts/humanities students are actively rejecting technology. It was all about being cool. About rebellion. About saving money. And honestly about fear.

Artists have to be a part of the global give-and-take.

How do I know? I was one of them. I was a bookish, literarily-devout writing major. The type who read prose poems and flash fiction anthologies in the corner at parties, that sort of thing. And though I wouldn’t have admitted it then, one of the reasons I didn’t own a smartphone was because I was afraid of it. GPS tracking, constant distraction, never being able to escape my emails? Not interested.

Luckily, I had an excuse. Being a Luddite was cool. Romantic. My classmates and I composed our fiction collections on Brother word processors and antique typewriters. The less connected you were, the better.

Needless to say, I was the proud owner of an old-school flip phone throughout my twenties. The kind you powered down when you weren’t using it. Then last year I got this bad boy. Full disclosure, it took me a while to get a hang of my fancy S7. Texting on a screen takes a hot-minute to master. (I went through a period of being compared to people’s grandmothers. A lot.) But ever since I learned how to text with my thumbs, adjust my email notifications, and ignore phone calls without feeling guilty, my smartypants phone has proven to be a huge asset to my creative life.

And I know I am not alone in this creative revelation. Though we’ve all had different personal experiences of it, in the last 15 years our whole generation has undergone a technological upgrade in one way or another. Transitioning from an artistic scene of rebelling against technology to utilizing it for one’s creative work was not a mindset that shifted overnight, of course. Here are some of the ways that a swath of artistic technophobes has learned to harness technology for good and protect themselves against those aspects of tech that once frightened the bejesus out of them.

There comes a point in every liberal arts student’s life when they realize they have to make money with their degree. Some people panic, maybe switching majors, and some take on part-time jobs to build up their professional resumes outside of their creative work. The artists I know who have made names for themselves outside of academia are the ones who fell somewhere in the middle on the career panic spectrum. They didn’t worry so much as to strangle their art, but at the same time they were proactive in learning skills that would help them get gigs in their field. The painters taught themselves Photoshop, the fiction writers started saving their work to the cloud and sending it via submission management programs instead of SASEs, and we all learned to use encrypted password protection rather than trust our non-copyrighted art to the great unknown.

We realized that living in an insulated artistic bubble just doesn’t work. Artists have to be a part of the global give-and-take. At the very least, we should support one another’s work in the greater community—go to readings, gallery openings, and for goodness sake buy our friends’ books.

It turns out that the way to make our work available to the community in this modern age is by approaching new technologies with a curiosity and openness. Innovations like mobile pay make it easy on people to trade money for art. Musicians selling their albums after a show use portable chip readers that plug right into their smartphones, while fine artists in a gallery setting generally opt for something more substantial like a NFC/Apple Pay reader. It’s all about not being afraid to explore the options, and figuring out which technology best suits the creative needs of the moment.

Creating and sharing art is not just about making money. At its core, art is a way to grow and reflect upon humanity in its most personal and impersonal manifestations. In order to do that, an artist must always be learning.

The technological innovations of the last hundred years make information a lot easier to access, making it simpler to gather new perspectives and ideas that will inevitably enrich one’s work. A smartphone quite literally allows a person to carry the Oxford English Dictionary in his or her pocket. The 2nd Edition of the OED, published in 1989, weighed 138 pounds. Your average joe would have needed some mighty big pockets to haul that around. Today, with one little device, no word need ever go unknown. And that, of course, is just the tip of the iceberg.

Technologies are not an extension of our humanity and artistic expression. They’re just tools.

Beyond personal enrichment, accessible technologies also have surprising implications for formal education. They allow teachers and students to connect across barriers that may have previously presented challenges. Creative spirits who’ve chosen socially-inclined work are able to use technologies to engage with their students.

School counselor Allison Weaver uses Google Forms to survey her elementary students and track topics that she’s concerned about.  After the students have filled out her survey, answering questions like, “I like coming to school: ‘1-Not at all’ to ‘5-Love it!,’” she’ll use a drop-down box to denote particular topics of concern for each student—behavior, school work, anger, grief, etc. It gives the kids freedom from feeling singled out during class, but still allows the counselor to interact with them directly and keep private notes on each student’s progress.

Lauding the social aspects of technology of course brings us to the Luddite’s deepest fear: That technology will overrun or overwrite our humanity.

In a way, having grown up with social skepticism about the integration of technologies into daily life actually works to our advantage. We were raised with novels like MT Anderson’s Feed, in which the reader experiences the near future from the perspective of a teenage narrator with a commercially-driven brain implant that changes the way he thinks and behaves. The brain implant, or feed, is essentially mobile internet.

We’re not that far off.

The hyper-awareness of society’s growing reliance on technology has at least one major benefit. It’s that nagging voice that makes us unplug on a regular basis. It’s a reminder to meditate. To go camping in the backcountry. To not just turn the ringer off, but turn the phone off every once in a while.

A Liberal Arts Luddite’s ingrained skepticism serves as a helpful reminder to all of us that technologies are not an extension of our humanity and artistic expression. They’re just tools. When abused, our smartphones can dull our curiosities and water down our creativity. But at their best, they broaden our perspectives and our connections with one another. That’s certainly an art.

Katie Kapro holds her MFA in nonfiction writing. When she’s not at her desk or ogling vintage books, she can usually be found tromping around in the Sawtooth mountains just north of her home. To read more of her work, follow her on Twitter and Facebook.

View all posts by Katie Kapro →