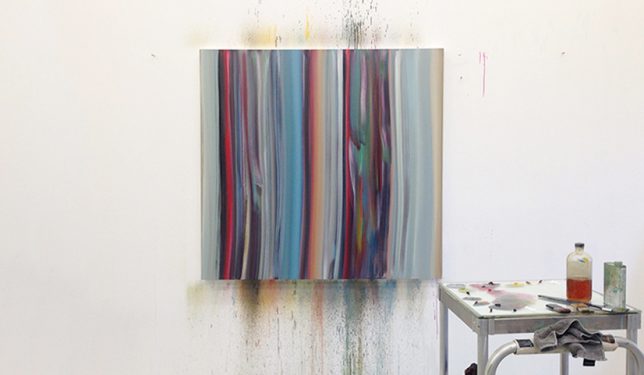 February, last year, I taught a painting class on color theory and oil glaze techniques at Santa Fe University (SFUAD). Early in the semester I went home with a headache and nausea. I hadn’t exposed myself to anything unusual that day. The next morning, I woke up with what felt like a hangover, and from that day on I could no longer set foot in my painting classroom without feeling sick the rest of the day. I also could no longer enter my own studio! I had become sensitized to the solvents and cleaning agents used in my painting practice.

My life turned upside-down, as I learned to cope with the sudden onset of these new physical ailments related to my work. Aside from the emotions of fearing I may never paint again, I became physically sick when I walked down the detergent isle at a grocery store, entered a mechanic shop or inadvertently set foot in a room where someone was painting their nails. On the worst day, I simply walked past the janitor cleaning cart at my daughter’s school and subsequently felt sick for hours afterwards. As well as nausea and headache, I had the new experience of my reptilian brain’s fight or flight response, along with “brain fog,” which feels like early onset dementia.

One of the known, and more obvious, cures to chemical sensitivity is to stay away from chemicals.

You can imagine this past year was quite a ride. I revamped the painting studios at the school—switched students to a solvent-free painting medium and canola oil for washing brushes. However, I did not want to shortchange my class, so I continued to teach a traditional technique that required small amounts of mineral spirits to build “lean to fat” glaze layers of oil. To avoid consistent nausea and headaches, I finished up (what would ultimately be my last semester teaching at SFUAD) with the students painting en plein air.

I changed my own studio practices too: solvent-free mediums, new ventilation system, and a respirator when working long hours or working on large surfaces with mineral spirits. Thankfully I had guidance from chemist, artist, and one of our nation’s leading experts in industrial hygiene, Monona Rossol. I met Monona when she was consulting at SFUAD, and then by chance sat next to her on the red-eye to New York. She is a national treasure and worth looking up.

One of the known, and more obvious, cures to chemical sensitivity is to stay away from chemicals. For nearly six months, I spent as much time as possible in fresh air, both hiking and skiing. Sounds like fun right? I relied on a surplus of paintings in my studio to sustain my income. (Fortunately, 2016 was my best year ever in sales!) I sought out the healing council of friends, and had an unexpected encounter with a Lakota heyoka when I was in Standing Rock, North Dakota last Fall. I am further convinced this is a shared dream, and any situation can be transformed.

Within the past two months, I have only had one episode, which is a major improvement. I was in my studio, starting to get brain fog and went home feeling sick. It didn’t make sense because I was working with watercolors that week. I called my studio neighbors to inquire and was surprised to hear, “nothing toxic going on over here, just cleaning floors with plain ol’ bleach and Fabuloso.” Bingo! I will assume all my readers understand the level of toxicity in those two products, especially combined. I bought my neighbors non-toxic cleaners. Problem solved.

Today, I am happy to say that my condition has improved and is now manageable. I have new rules about diet, studio practice and lifestyle, but I am—for the most part—back in action! I no longer wonder, will I feel sick today? Also during the time away from my studio, I was able to reflect on my work and put new energy into my vision and career. I became inspired to work on new, long-term projects, which are currently in motion but I cannot announce yet. Be ready for exciting news!