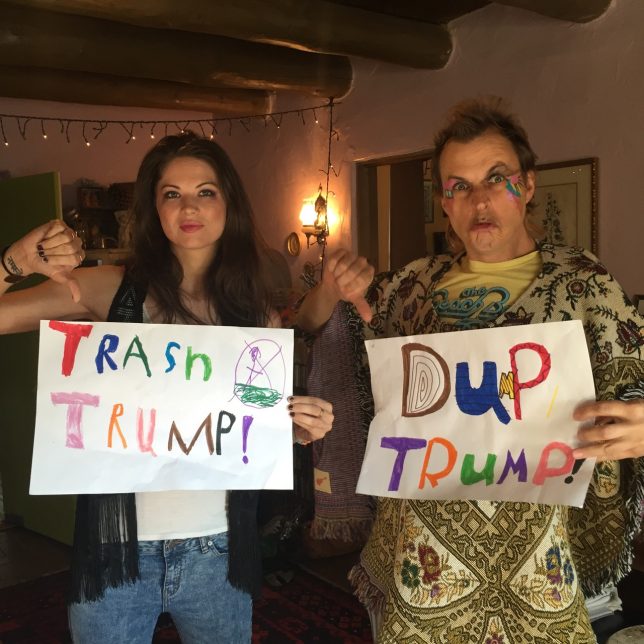 I often feel that anger with you for the way he attacks the less powerful. Just one example: his mistreatment of women. There are a lot of misogynists in the world, but what upsets me so much about this one is that millions of my fellow citizens, including some in my own family, heard his comments about women and still voted for him.

Yes, you and I SHOULD have compassion for him. However that does not mean that we have to excuse or support anything that he does. That is not the definition of “compassion.”

Compassion is not easy to have for someone so hateful.

Let’s start with his supporters. All of them are in someone’s family. My own aunt voted for him despite herself being the victim of domestic violence multiple times, including emotional, mental and physical abuse. She has also been abused by employers. She was always paid less then men, and once she was even fired for being female. It seems to me that a woman who has been on the receiving end of such misogyny, so many times, would finally get tired of it and demand better treatment by the men in her life. But that is not necessarily the case.

When I found out that she voted for this hateful orange man, I felt sick—but I was not surprised. She has always voted for every Republican that the billionaire class has placed in front of her, regardless of how misogynistic the candidates have been. After Trump’s well-publicized comments about abusing women and more, I felt extra sad for her that she STILL supported him. But that is who she is. Her entire life she has been taught that she is less than a man. The women in her life, her mother and much of society reinforced that idea in her head. Decade after decade she has devalued herself. Her religion has taught her that she is “only” a woman. How else is she supposed to feel? Like you? Like me?

Clearly it would be better for all of us if EVERYONE would finally stand up for the less powerful and acknowledge that they are to be cherished. It would personally fill my heart with joy for all of my close family members to make that leap. But that does not seem likely to ever happen, so I am left trying to love them even though they do not really even love themselves.

Compassion for our own family should come naturally and should be easy. This is a place to start. It has usually been easy for me to feel compassion for my family, but when someone supports a proud racist/misogynist who specializes in all kinds of abuse, it can be hard to reconcile that with loving and accepting these people who are in my life. I clearly love them, but I no longer tolerate racism and misogyny in my life.

I also acknowledge that I am trying to erase those things from myself. For example, I have been racist. I was raised by racists, in a racist society to be a racist. Eventually I realized that it was not acceptable and I had to begin undoing much of what I was taught. Not everyone is able to do that and our efforts to have compassion should try to recognize this fact. I am still discovering how I am ignorant to my own white male privilege, which is good because hopefully I can do something about it.

I will not tell you to tolerate this abusive cheeto president. But I will say that we should keep in mind that he chooses to be a racist, misogynistic coward, in part, because he was brought up by a father who associated with the KKK. Think of how that childhood could emotionally and mentally disable most of us for many years, unless we are able to overcome our own childhood, the way that some of us are trying to do. Compassion is not easy to have for someone so hateful but learning how to have even a little bit of it is what will keep us from being just like this selfish orange man-child.

“What are riches untold, in a life without compassion?” —Todd Rundgren, “Compassion” 1981