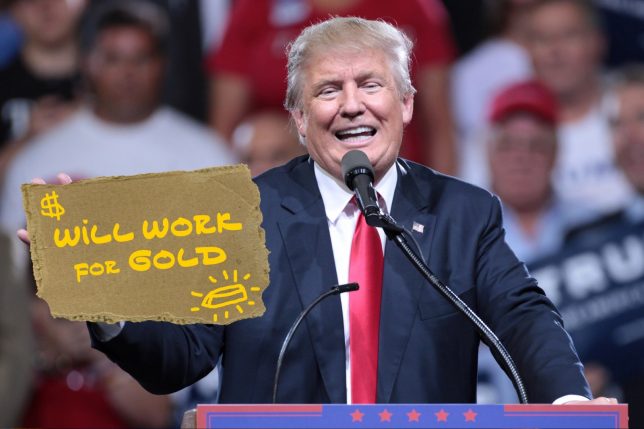 Not a lot of people know this about me, but I have always wanted to be the US Ambassador to China. Until recently, it seemed far beyond my reach. Having spent my life as a photographer, it seemed inconceivable that I would ever be able to surmount the basic facts that I have never been to China, I don’t speak Chinese, and as those that know me can attest, I have few to no diplomatic skills.

But now, because of one man, there is hope for me and others like me throughout the country yearning to work jobs they have previously found themselves barred from simply because they have no experience. Who is this Chuck Yeager; this Jackie Robinson; this Harvey Milk of the inexperienced? Ladies and gentlemen of the HR department, let me introduce to you a man with absolutely no public service experience whatsoever, our new president, Donald J. Trump.

I can see the baby’s head! Quick, get a businessman!

Just as the election of Barack Obama broke the presidential glass ceiling for African-Americans, the election of President Trump offers hope to a group of people that have been discriminated against in hiring practices for generations: the inexperienced. Since our country’s founding, steps (gradual as they may have been) have reduced barriers to job opportunity based on one’s race, color, religion, sex, national origin and sexual orientation, yet at the same time, discrimination against the inexperienced has been on the rise.

At our country’s founding, the most learned woman or African-American would have quickly found barriers to their practice of law or medicine, while the most ignorant free white man with the inclination could simply hang up a shingle and declare themselves a doctor or lawyer anywhere in America. Now, government intervention has gone so far as to make a criminal out of any inexperienced American simply trying to work in numerous fields. Doctors, lawyers and even truck drivers must now prove their experience or face criminal prosecution just for going to work at their chosen profession. Is it right given that Donald Trump now holds the most powerful job in the world actually running the US government that governmental regulations should set a higher standard for any other American wanting to work? Is this the greatness we all want?

Some inexperience advocates say that Trump is not truly a champion of the inexperienced, but rather is simply trying to reduce what makes one qualified for any job to a singularity: being a businessman. They counter that it is the specialization of skills that is at the root of discrimination against the inexperienced, believing that a businessman can get any job done because skills in business translate to any job. Perhaps it won’t be long now before we see Americans across the country calling out, “I can see the baby’s head! Quick, get a businessman!” Or, “The old bridge washed out during the storm. Let’s get a team of businessmen over there to fix it.” Personally, the Trump presidency already makes me think, “The toilet is clogged. I better call a businessman.”

The deeper question for job seekers, especially those of us in creative fields seeking new opportunities, now becomes: How exactly will human resources departments respond to the election of Donald Trump? Since their inception, HR departments have been the largest organized group preventing the inexperienced from getting jobs. No doubt initially there will be meetings and conferences to establish new policies and best practice documents to be more inclusive of ignorant and unqualified jobseekers, but will it culminate in the end of the most discriminatory phase the inexperienced face: “experience required?” Is it even possible that the Trump presidency will ultimately make the HR profession obsolete?

For now, the struggle remains real for inexperienced jobseekers, but the election of President Trump has at least forever changed the way we as a people define who is “qualified.” For me, and those countless other Americans totally unfit for things like international diplomacy, it remains to be seen if a wall has finally been broken down.