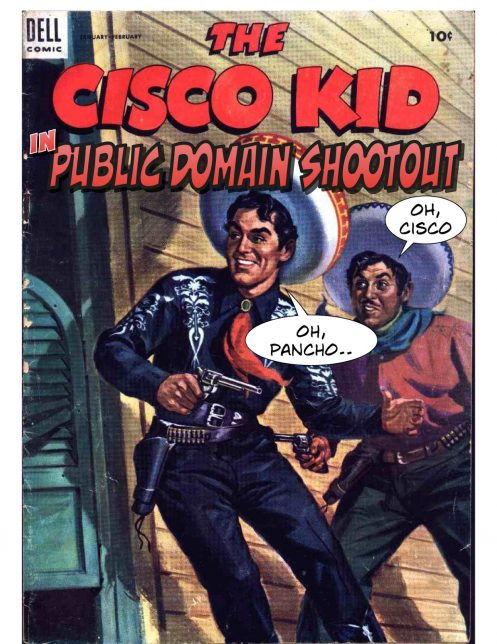 Dear Rich: O Henry published a short story in his Western series in 1907 called “The Caballeros Way.” The main character was an outlaw called the Cisco Kid. Since 1914, many movies and a TV series about the Cisco Kid were produced. I would like to write a script, completely original, with the Cisco Kid as a character. Can I legally use the name, Cisco Kid, as a character in my script? Is his name and character in the public domain since the story was published in 1907?

You can definitely use the Cisco Kid in your work. O Henry’s story (in which Cisco first appeared as a ruthless American outlaw), was published in the US prior to 1923, placing it within the public domain. There are also no character trademark registrations for the Cisco Kid, though the name has been the subject of registrations for candy, fishing lures and tequila.

If you plan to include the Kid’s sidekick, Pancho, in your script, beware that his copyright status is not as clear. Pancho did not appear in the O Henry story and was reportedly inspired by Don Quixote’s sidekick, Pancho Sanza. His first appearance was in the 1945 film, The Cisco Kid Returns (not to be confused with the 1939 film, Return of the Cisco Kid) and assuming that film was timely renewed, the assignees of Monogram Pictures (Allied Artists International) may own copyright on that character. We say “may” because a number of Monogram films from 1936 to 1946 fell into the public domain. (In other words, further copyright research is required.) Our analysis of Pancho is based on the case involving Sherlock Holmes in which it was determined that Sherlock was in the public domain but that the assignees of Arthur Conan Doyle’s estate could claim copyright on the characters (for example, Watson’s second wife) in stories published after 1922.

Dear Rich: I work as the Permissions Coordinator for my company, and we have received many agreements for use of excerpts and articles in various publications over the past few years. Now we are trying to ascertain if we are legally permitted to sell/distribute our publications to customers abroad. Each rightsholder seems to have different verbiage when it comes to territory, running the gamut between “Territory: North America” and “Territory: Publication in the United States” to “Territory: Publication and distribution in the United States.” The last one is clear, but how are “territory” and “publication” legally defined in the copyright industry? Is “distribution” implicit when only “publication” is mentioned?
Ideally every copyright license should include:

Often these three provisions are merged into one or two clauses, as seems to be the case with some of your agreements. (When we say”copyright license” we’re talking about any temporary grant of copyright—for example, a permission agreement.)

Publication includes distribution. Publication is assumed to include distribution unless the agreement provides otherwise. This jibes with trade practice and the copyright law definition of publication: “the distribution of copies of a work to the public by sale or other transfer of ownership, or by rental, lease, or lending.”

Interpreting contract language. What happens if there is a dispute about interpreting “distribution,” “territory” and “publication”? Absent definitions within the agreement, a court when examining contract language will usually seek out the “plain meaning” of the words—that is, how a reasonable person in the publishing industry would interpret them.